Protests are expected in Delhi, Haryana and other northern states to mark completion of seven months of farmers’ sit-in agitation at various Delhi border points against the Centre’s new agri laws. 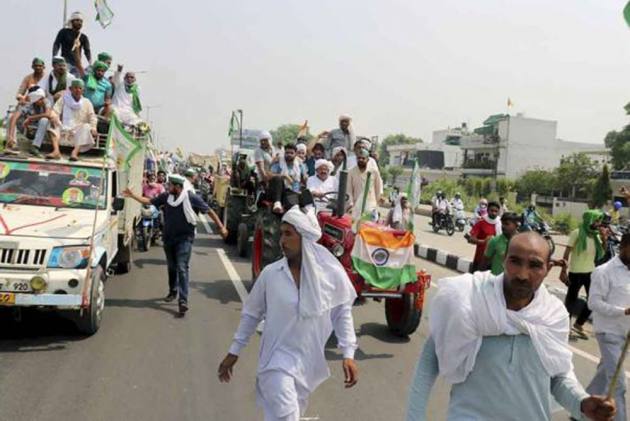 To mark seven months of protest against the Centre’s recent agriculture legislations, farmers across the country will hand over a memorandum to various state governors demanding the repeal of the three new laws on Saturday, Bharatiya Kisan Union (BKU) chief Naresh Tikait said.

Attacking the Centre for not repealing the new laws, Tikait on Friday said, “Only a deaf and mute government can act like this.”

Tikait made the comments while addressing a gathering of farmers at UP Gate, one of the three main border points of Delhi, where thousands of farmers have been holding a sit-in protest for the last seven months.

Addressing the protesting farmers, Tikait said it is the "height of the central government’s rigidness" that the farmers have been sitting in protests at various border points of Delhi for the last seven months but the government has turned a blind eye to their demand.

Earlier, the Samyukta Kisan Morcha (SKM) on Friday submitted a memorandum to President Ram Nath Kovind urging him to direct the Centre to immediately repeal the three “anti-farmer laws”.

“We, the farmers of India, are writing this letter to you, the head of the nation, with deep anguish and indignation. Today on 26th June, upon the completion of seven months of our continuous protests at Delhi’s borders, and on the 47th anniversary of Emergency in this country, we are writing to you from all parts of India about the twin challenge of saving our agriculture and saving our democracy,” the memorandum stated.

The SKM in its memorandum also asserted that the Centre’s new laws are “unconstitutional” and “undemocratic”.

Meanwhile, protests in the heart of the national capital are anticipated on Saturday and the Delhi Metro Rail Corporation (DMRC) and police authorities have taken security measures.

"As advised by Delhi Police, in view of security reasons, three Metro stations of Yellow Line namely, Vishwavidyalaya, Civil Lines and Vidhan Sabha will remain closed for public from 10:00 am to 2:00 pm tomorrow i.e, 26.06.2021 (Saturday)," the DMRC tweeted on Friday night.

Thousands of farmers mostly from Haryana, Uttar Pradesh and Punjab have been protesting at the Singhu, Tikri and Ghazipur border since November 25, 2020, seeking a repeal of the Centre’s three new laws.

Farmers have been protesting against the Farmers' Produce Trade and Commerce (Promotion and Facilitation) Act, 2020; Farmers' (Empowerment and Protection) Agreement on Price Assurance and Farm Services Act, 2020; and the Essential Commodities (Amendment) Act, 2020.

Several rounds of talks between the farmers and the government have failed to break the deadlock over these contentious laws.

The government last held talks with farmer leaders on January 22. The talks between the two sides came to a halt after a January 26 tractor parade by farmers in Delhi turned violent.