‘Save Me, I Shall Always Speak For You’: Akhil Gogoi Appeals To People Of Assam 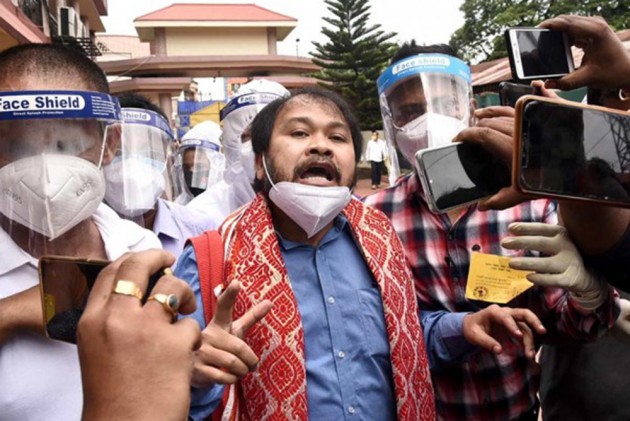 Jailed Sibsagar MLA Akhil Gogoi on Wednesday made an impassioned appeal to the people of Assam to save him from being consigned to prison for the rest of his life by raising their voice to protest the murder of democracy in a democratic manner. “Save me, save my voice and I shall always speak for you,” he said in an open letter to the people of the state.

The letter released by Raijor Dal, the party he heads, comes a day after the NIA filed an additional chargesheet – after over a year of the original chargesheet -- in the second and last case against him in connection with the 2019 anti-CAA protests. The NIA has also presented a new protected witness. He was acquitted in another case earlier this month.

He said the state and central governments and the NIA have hatched a conspiracy to keep him in jail and silence his voice forever and Assam Chief Minister Himanta Biswa Sarma appeared to be leading this sinister move. “I need your help. Please unite and protest against this conspiracy. I am your voice, please don’t allow my voice to be killed,” he said.

Out On Parole, Akhil Gogoi Meets Ailing Mother In Jorhat

Gogoi said the new protected witness has now stated that he was running syndicates of betel nuts and cows besides being involved in the crime of honey-trapping. “From being a terrorist, I am now a cow thief,” he said. He also said that another protected witness has identified a man in a picture, which also has two other persons purportedly engaged in martial arts training in a jungle, as him. “That person in a blue T-shirt is supposed to be me. You will laugh seeing the picture because you all know me,” he said adding that since the witness identified the person as him charges should be framed against him in the remaining anti-CAA protest case.

The NIA special court is currently hearing arguments on framing of charges in the case. The agency was scheduled to present its final arguments on Wednesday but the matter was deferred. “Today’s (Wednesday) hearing has been put off to allow the state advocate general another 10 days,” he said describing the deferment as unlawful and a conspiracy to curb personal freedom.