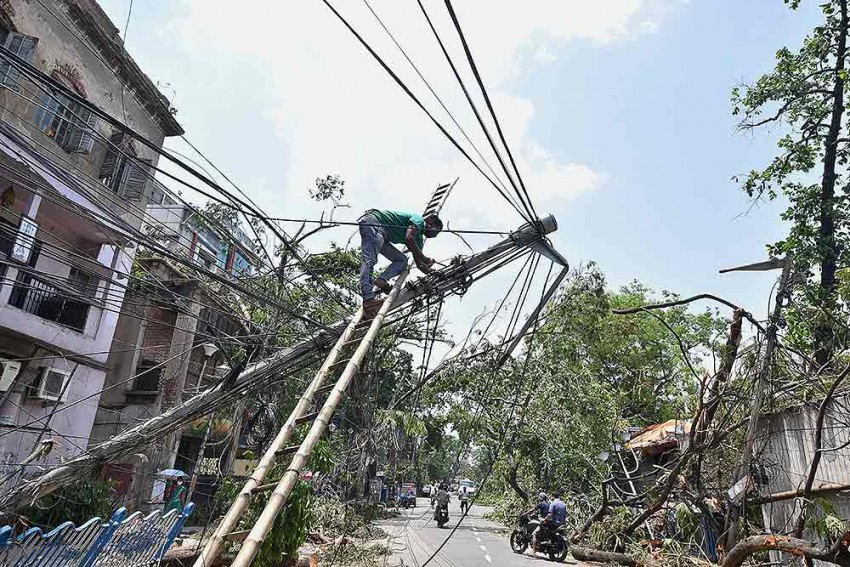 A worker attempts to repair an electric pole, in the aftermath of Cyclone Amphan, in Kolkata.
PTI Photo
PTI 2020-05-25T15:30:11+05:30 Protests Continue Over Restoration Of Power, Water Supply In Cyclone-hit Bengal 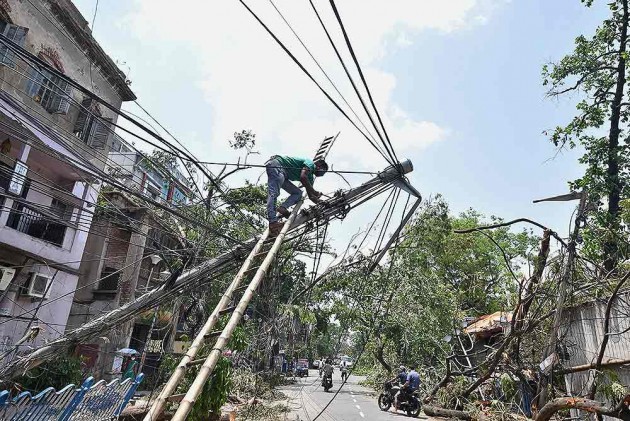 Sporadic protests over demands for restoration of power and water supply continued in several cyclone Amphan-hit parts of West Bengal for the fifth consecutive day on Monday while normalcy has returned in other affected areas of the state.

On the other hand, the army and NDRF teams, assisted by personnel of the state disaster relief force, made significant progress in removing uprooted trees from the city's arterial roads.

Residents of Garfa area in south Kolkata hit the streets demanding restoration of power supply while people in Behala in the southwest part of the city demonstrated against increased water prices amid rising mercury levels.

"There is no electricity in our area for the last five days. Our mobile phones got switched off and we are unable to get any news," said Bikash Palit, a resident of Garfa.

The Army was deployed in Kolkata and the city's neighbouring districts on Saturday, hours after the West Bengal government sought its help for immediate restoration of essential infrastructure and services in the state.

He, along with his security personnel, was seen cutting the uprooted trees blocking the roads.

"The roads were blocked even five days after cyclone Amphan struck the state. The residents are facing a lot of problems. So, I along with some other people decided to remove these uprooted trees on our own," Ghosh said.

The West Bengal government had on Sunday instructed the two power utilities of the state, WBSEDCL and CESC, to take firm action in restoring power supply to the cyclone-hit areas.

The cyclone had blown away electric poles, damaged transformers and uprooted trees that fell on electric wires, disrupting power supply in several parts of the state, including Kolkata.

Mobile and internet services are yet to be restored in several parts of South and North 24 Parganas and East Midnapore districts.

On Friday, Chief Minister Mamata Banerjee had described the situation as "more than a national calamity" and put the estimated loss at more than Rs 1 lakh crore. She had stated that more than six crore people had been affected by the cyclone.