Besides Kovind, BJP National President J P Nadda and union minister for I & B Anurag Thakur and other MPs from the state will also be attending the event, though some will join virtually. 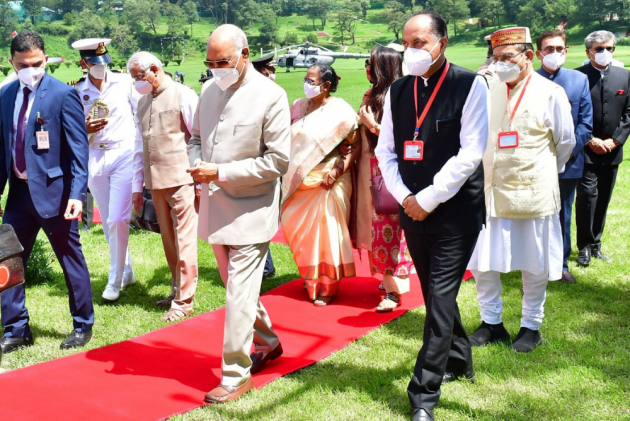 President of India Ram Nath Kovind arrived in Shimla—the erstwhile summer capital of British India, on a four-day tour to attend the Golden Jubilee elebrations of the state assembly on September 17 at 11 am.

The police have made massive security arrangements in the town, closing some roads for public mobility and also restricting the entry of unauthorised persons in and around Cecil Hotel.

Earlier the President was slated to stay at The Retreat — the holiday resort of Rashtrapati Bhawan at Chhabrabara, 16 km from Shimla. However, the plan was changed after three positive Covid-19 cases were reported amongst Rashtrapati Bhawan staff deployed at the Retreat.

As per restricted orders from the Rashtrapati Bhawan, all persons coming to the state assembly on September 17 including sitting and former MLAs will be required to get their RTPCR results.

The Chief Minister held a meeting with opposition leaders on Wednesday and sought their support to make the event memorable as the state assembly had seen quite a few momentous incidents since Himachal Pradesh became a full-fledged state in 1971, and has created its own history.

Though legendary leaders who delivered the finest speeches in the House like Dr Y S Parmar, the state’s first CM remembered as the “architect of Himachal”, are no more alive, 93 former legislators will grace the occasion and listen to the President of India.

Besides former Chief Ministers-- Shanta Kumar, Prem Kumar Dhumal, former Speakers Vidya Stokes and Radha Raman Shastri, there will be a galaxy of ex-legislators coming to the event.

BJP National President J P Nadda and union minister for I & B Anurag Thakur and other MPs from the state will also be attending, though some will join virtually.

The "graceful presence" of six-time Chief Minister Virbhadra Singh, who died in July at age of 86, will be missed, said leader of opposition Mukesh Agnihotri.

On Wednesday, Chief Minister Jai Ram Thakur took stock of the arrangements at the Assembly – which has been decked up for the event and the arrival of the President at 11 am .

Known as the "Council Chamber", the Himachal Pradesh Assembly stands out not only for its grandeur, architecture and significant pre and post-Independence events but also for the pioneering role it played in passing some landmark legislation that went on to later be adopted by the central government and also other states.

During the pre-Independence era, many of India's top dignitaries regularly visited Shimla which was then also doubling as the summer capital of colonial India. The Assembly building, named Council Chamber, was the venue of sittings for the central Council.

It was here that Vithalbhai Patel, co-founder of Swaraj Party and elder brother of Sardar Vallabhbhai Patel, attained the distinction of getting elected as first Indian Speaker (then known as President of the Central assembly), defeating the British candidate through a democratic voting process. The election of Patel as the Speaker proved to be a landmark event, marking a new beginning in India’s political history.

Some of the top Indian leaders who have visited the city and attended sessions include Moti Lal Nehru and Lala Lajpat Rai.

In 2014, the Himachal Pradesh assembly became the first House in the country to become paperless .