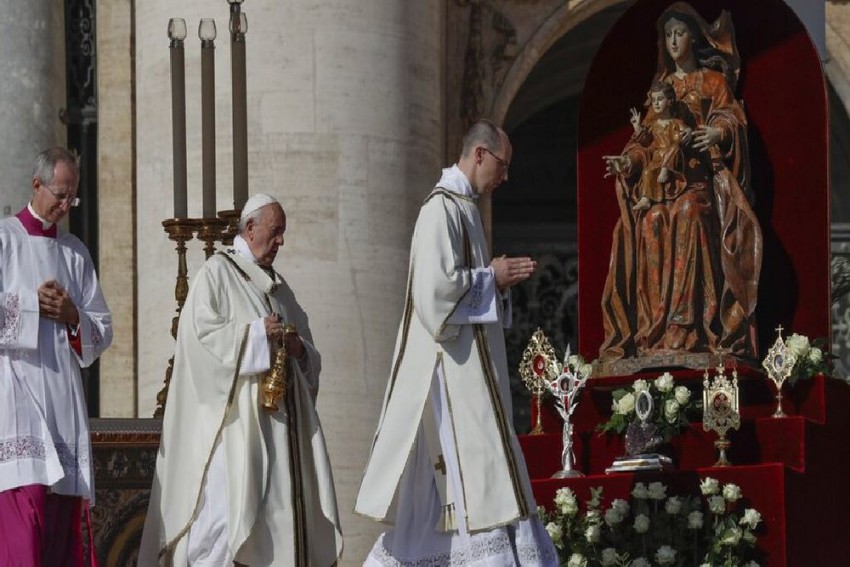 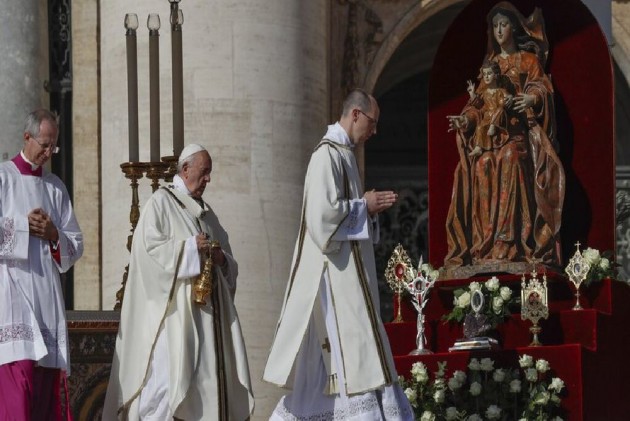 Indian nun Mariam Thresia and four others were declared Saints by Pope Francis at a grand ceremony at the Vatican City on Sunday.

Mariam Thresia, who founded the Congregation of the Sisters of the Holy Family in Thrissur in May 1914, was raised to the highest position within the centuries-old institution during the ceremony at the St Peter's Square.

The ceremony included a Latin hymn and a recommendation by a representative of the Congregation for the Saints. Huge portraits of the five new Saints were hung from Saint Peter's Basilica during the ceremony, which was attended by tens of thousands of devotees.

Minister of State for External Affairs V Muraleedharan led the Indian delegation at the ceremony.

With Sunday's canonisation, the centuries-old Syro-Malabar Church in Kerala now has four Saints, the first being Sister Alphonsa, who was declared a saint in 2008. Others are Father Kuriakose Elias Chavara, popularly known as Chavara Achen, and Sister Euphrasia, popularly known as Evuprasiamma, who were declared Saint by the Pope in 2014.

Mariam Thresia was called during the first half of her life simply Thresia, the name given to her at baptism on May 3, 1876. Since 1904, she wanted to be called Mariam Thresia as she believed that she was asked to add "Mariam" to her name by the Blessed Virgin Mary in a vision.

And it was as Mariam Thresia that she was professed in 1914, the foundress and first member of the Congregation of the Holy Family.

The Church has declared her as one of the rare holy persons who moved constantly and consciously among the inhabitants of this world as well as with visitors from the world above and below.

"In imitation of Jesus, she helped the poor, nursed the sick, visited and comforted the lonely people of her parish. She was also blessed with the stigmata but kept it secret to avoid attention.

"She received several mystical gifts like prophecy, healing, an aura of light, sweet odour and frequently had ecstasies and levitations.

"Her entire existence was tormented by demons and she offered her sufferings for the remission of the sins of the world," the Vatican News said.

Pope Francis on February 12 authorised a decree recognising a miracle through her intercession, which cleared her for sainthood, and on July 1, the Pope decided on October 13, as the canonization day.

In his 'Mann ki Baat' radio programme on September 29, Prime Minister Narendra Modi had referred to Sister Mariam Thresia and said it is a matter of pride for every Indian that, on the coming October 13, Pope Francis will declare her a saint.

"Sister Thresia, in her short lifespan of 50 years, worked for the good of humanity becoming a noble example for the entire world. Whatever task Sister Mariam Thresia undertook and accomplished, she did so with utmost dedication and devotion," Modi had said.

She rendered service in the fields of education and social service and has built many schools, hostels and orphanages, Modi had said.

'If They Have Guts': PM Modi Dares Opposition To Bring Back Article 370