The Kashmir Press Club has condemned the thrashing of three journalists 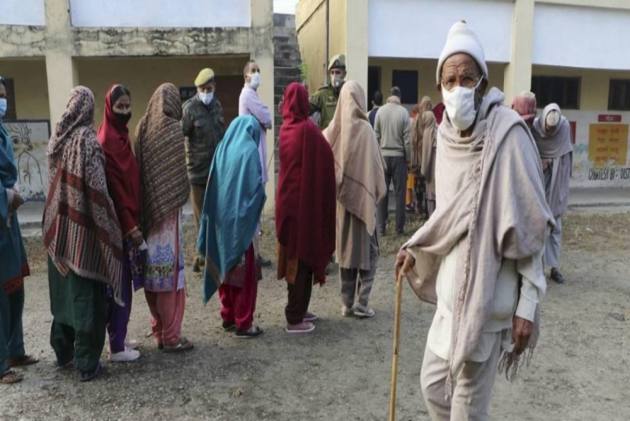 In the fifth phase of district development polls, Jammu and Kashmir Police thrashed three journalists and took away their phones and cameras in South Kashmir’s Anantnag district.
The National Conference and the Peoples Democratic Party also accused the police and security forces of obstructing people from voting.

“My colleagues and I were at a polling station in Lever where some people alleged that no vote was allowed to be cast till 8.30 am despite the fact that polling should have begun at 7 am. We interviewed People’s Alliance for Gupkar Declaration candidate Nisar Ahmad there and also took some video of the polling station. In the meantime, senior superintendent of police (SSP) Sandeep Choudhary came to the spot. Without any reason, he slapped two of my colleagues. I tried to intervene and asked why he was beating my colleagues. The SSP rebuked me and said don’t speak in English here (yehan angrezi mat jado). Then he beat me up as well. And after that we were bundled in a Gypsy and detained at Srigufarwara police station,” said one of the journalists. He said their equipment and phones were taken away by the police.

“At the police station, one of our colleagues Junaid Rafiq complained of breathlessness. He was shifted to a local hospital where his oxygen saturation was reading below 70 (the normal level is 90) and was put on oxygen,” a journalist said.

The Kashmir Press Club has condemned the thrashing of three journalists.

“In a distress call to the Kashmir Press Club, journalist Fayaz Lolu who works as a stringer with ETV Bharat said he along with two other journalists, Mudasir Qadri (News 18 Urdu) and Junaid Rafiq (TV 9) were ‘beaten’ today while covering the ongoing DDC elections in Srigufwara area of South Kashmir,” a Press Club statement said today.

“Fayaz also said that their newsgathering equipment was also seized by the police. Fayaz Lolu alleged that it was when the SSP of Anantnag arrived on the spot that they were beaten up ruthlessly and taken to the nearest police post. Fayaz further stated that Junaid has been injured and was in the hospital,” the statement added.

The Kashmir Press Club termed the beating of journalists as unfortunate and called for a thorough inquiry into the incident. “We hope strict action is taken against those found guilty in this act perpetrated in utter disregard of the freedom of the press. The KPC further urges the Chief Electoral Officer to take note of such incidents and initiate action against the concerned police official. The KPC further urges that the authorities should ensure that an enabling atmosphere is created for the free and fair functioning of the media in Kashmir,” the statement said.

The National Conference said in Lever, Badroo, Katso and Kaniwal of Anantnag district, the police didn’t allow voting beyond 11.30 am. Instead of 7 am, polling started in these areas at 9 am and polling booths were closed after 11.30 am, senior National Conference leader Altaf Ahmad Kaloo said.

The National Conference said it seems the government was helping voters of the BJP candidate only. BJP senior vice-president of Kashmir Sofi Yousuf, whose wife is contesting from the area, rejected the charges saying the National Conference is staring at defeat. “There is no truth in the allegations that people were not allowed to vote,” he added.

“I heard journalists were harassed at Lever but I think in a given situation there was so much rush and the SSP might not have recognized journalists. The area security-wise is sensitive. There might be some communication gap,” Sofi Yousuf said.

Political parties said security forces didn’t allow people to vote in some areas to benefit the BJP. “Security forces have cordoned Matribugh in Shopian and are not allowing people to come out to vote under the pretext of inputs about the presence of militants. In a brazen display of power, armed forces are being used to rig this election and favour a particular party,” former Chief Minister Mehbooba Mufti tweeted.

National Conference spokesman Imran Nabi Dar said, “Over the past weeks, our cadre and leaders are facing undue restrictions in the name of security.” He said a public meeting scheduled for Thursday at Behibagh Kulgam was to be addressed by party leader Nasir Aslam was not allowed on the pretext of security.

The current District Development Council elections in Jammu and Kashmir are the first polls in J&K since the abrogation of special status granted to the erstwhile state under Article 370. The DDC elections are being held in eight phases till December 19. The results will be declared on December 22. So far, five phases have been completed.

There are 280 DDC constituencies in Jammu and Kashmir.

On October 17, the Centre government amended the Jammu and Kashmir Panchayati Raj Act, 1989, for holding direct elections to the DDCs. Under the new rules, each district has been divided into 14 territorial constituencies by the respective deputy commissioners for electing their representatives, who will then among themselves elect the chairman and vice-chairman of these councils. In the eight phases, there are 280 DDC constituencies in Jammu and Kashmir.

Since 2018 when the PDP-BJP government fell, Jammu and Kashmir has been under governor’s rule.