Blaming the TMC for violence in Bengal’s Cooch Behar district which left five people dead, PM Modi said, Mamata Banerjee and ‘her goons’ are getting jittery because of the massive support the BJP has received during the Assembly elections. 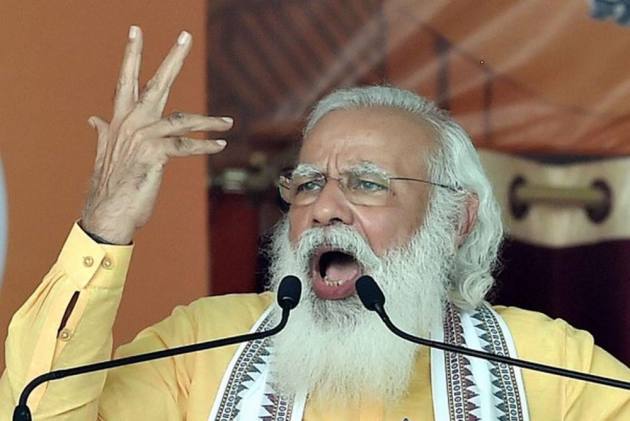 Offering condolences to the bereaved families, the prime minister urged the Election Commission to take stern action against those responsible for the violence and blamed the ruling TMC for perpetrating violence during the polls.

In two separate incidents of violence, five people were shot dead in the district. A scuffle between locals and CISF personnel in Sitalkuchi resulted in CISF personnel opening fire at a gathering near a polling booth in the area. The incident left four people dead.

Prior to that, a first-time voter was dragged from a polling booth and shot dead by unidentified persons in Pathantuli area.

Attacking West Bengal Chief Minister Mamata Banerjee over the violence, Modi at an election rally in Siliguri said, "Didi, this violence, the tactic of instigating people to attack the security forces, the tactic of obstructing the polling process will not protect you. You have to go out of power. Didi is asking people to attack and gherao security forces who are here to protect the rights of the people of the state."

Attacking Banerjee over the culture of violence and "tolabaji" (extortion), Modi said people of Bengal had made up their mind to defeat the TMC. "Didi, you don't preside over the destiny of the people of Bengal, they are not your 'jagir' (fiefdom)," he said.

Referring to the killings in the district, Modi said Mamata and her goons are getting jittery because of the massive support the BJP has received during the Assembly elections.

Modi added that North Bengal is critical to national security and that security over there has been undermined due to appeasement politics played by Banerjee.

Reaching out to the numerically strong Dalit Rajbongshi and Matua communities, Modi said the TMC insults them, and claimed a party leader was shown in a video likening the scheduled caste people to beggars.