All the IAF bases were on high alert anticipating a reaction from Pakistan to the strikes carried out in Balakot in a pre-dawn strike early on Tuesday. 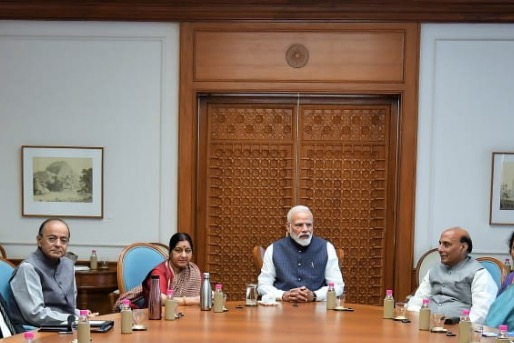 The Cabinet Committee on Security (CCS) met on Tuesday morning, chaired by Prime Minister Narendra Modi,  in the wake of Indian Air Force (IAF) fighter jets crossing the Line of Control (LoC) and dropping a payload of bombs in Pakistan.

All the IAF bases were on high alert anticipating a reaction from Pakistan to the strikes carried out in Balakot in a pre-dawn strike early on Tuesday.

Sources said the IAF bases along the borders and inside are fully geared to deal with any eventuality.

Air defence systems were activated to deal with any intruders along the International Border and the LoC.

The airborne radars were keeping a close vigil on the activities inside Pakistan, the sources added.

Though the Centre was yet to make an official statement, Minister of State for Agriculture Gajendra Singh Shekhawat tweeted that the IAF carried out aerial strikes across the LoC and destroyed terrorist camps.

"It was a necessary step required for the security of the country ... it was an act of maha parakram (mightily act)," he said.

He said Prime Minister Narendra Modi had already given a free hand to the forces to take necessary action against the backdrop of the Pulwama terror strike that left 40 CRPF personnel dead.

Some of the prominent veterans, who retired recently, have already hailed the move.

"Air strikes by 12 Mirage 2000 fighter aircraft at terror camps in Balakot this morning. 1,000 kg precision bombs used. Pakistan accepts. See images below," tweeted retired Lt Gen Satish Dua, who served as chief of the integrated staff to the chairman of the chiefs of staff committee till November 2018.

He added that there was a need to raise cost for Pakistan and the Pakistan Army to ensure they do not carry out terror attacks against India.

The CCS meeting comes after the Director General of Pakistan's Inter-Services Public Relations (ISPR) Asif Ghafoor confirmed in a tweet early Tuesday that the IAF planes dropped the payload near Balakot in Khyber Pakhtunkhwa before leaving in haste as the Pakistan Air Force (PAF) scrambled its war planes.

The attack was claimed by Pakistan-based militant group, Jaish-e-Mohammad (JeM), and prompted a spike in tensions between the two nuclear-armed neighbours.