Locusts normally affect districts in western Rajasthan but this time the swarms have travelled as far as Jaipur city. The swarms later headed towards Dausa district. 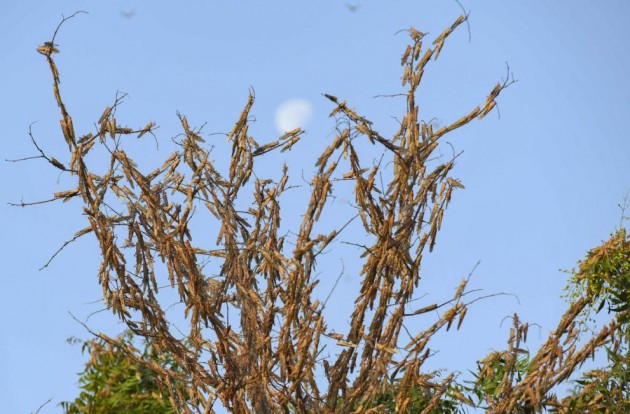 Swarms of locusts have entered Rajasthan's Jaipur, Uttar Pradesh's Jhansi and the eastern part of Maharashtra, posing a big threat to standing crops, plants and trees.

Locusts normally affect districts in western Rajasthan but this time the swarms have travelled as far as Jaipur city. The swarms later headed towards Dausa district.

The swarms are travelling farther and damaging trees as there are no standing crops for them to feed on, an official said.

Also Read: Why India And Pakistan Are United In Their War Against A 'Flying' Terrorist

In Jaipur’s Murlipura and Vidhyadhar Nagar areas, people beat 'thalis’ at the locusts that had settled on walls and trees, hoping to make them move on.

In Maharashtra, district and agriculture department personnel have initiated chemical spraying on crops and vegetation to save them from the migratory pests, said officials on Monday.

Primary reports indicated that in the last couple of days, four to five villages in the Vidarbha region have come under attack from the locusts, known for feasting on all sorts of plants and standing crops.

On Saturday evening, in Uttar Pradesh, a sudden movement of a swarm of locusts spotted on the outskirts of Jhansi district has put the district administration on alert.

The Jhansi district administration has directed the fire brigades to remain on standby with chemicals following a sudden movement by a swarm of locusts.

District Magistrate Andra Vamsi, who chaired an emergency meeting in this regard said, "The villagers along with the common public has been told to inform control room about the movement. The locusts will go to the places where there is green grass or greenery. Hence, details about the movement at such places must be shared."

"Scientists from central locust team and agricultural science department conducted an exercise and removed around 60 per cent of them by spraying," said Manoj Pushp, Mandsaur District Magistrate.

Uttar Pradesh Agriculture Department on Sunday informed Rajasthan, Madhya Pradesh, Punjab, Haryana and bordering districts of the State about the possibility of locust attack and asked them to take preventive steps accordingly.

"It said that at the point of the attack by the locusts, the farmers should make noise by playing the drums, plates, etc. "The farmers can also spray the recommended agricultural defence chemicals like tractor mounted sprayers, power sprayers, etc," adds the statement.

Meanwhile, for the first time drones and planes will be used to fight the locust attack in Rajasthan, said B.R. Karwa, project director, Agricultural Technology Management Agency, here on Monday.

The locusts have changed their attack strategy this season and are flying at a great height against their basic nature to fly in the low lying areas. Hence, Union minister for agriculture Kailash Chowdhary has requested the DGCA to help the government with planes which can fight the locust menace from a height by spraying pesticides, he informed.

Also, the Rajasthan government is considering tenders so that drones can be used in countering the locust menace, he said.