Such sandals are famously known as 'Kaptaan special chappals' and the snakeskin shoe was made as Eid gift for Pakistan Prime Minister Imran Khan by the shoe-maker. 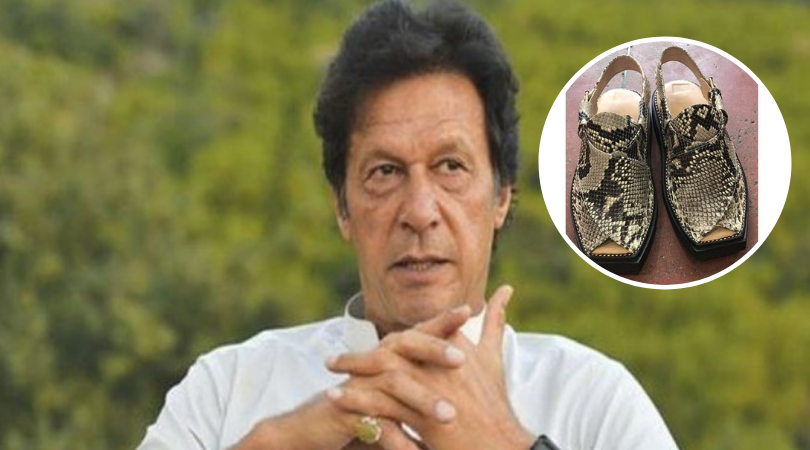 A Pakistani shoemaker was fined Rs 50,000 for making a shoe out of snakeskin, which he said was an Eid gift for prime minister Imran Khan
File Photo
Outlook Web Bureau June 04, 2019 00:00 IST Pakistan Shoemaker Crafts Snakeskin Sandal As Eid Gift For Imran Khan, Gets Fined

A famous Pakistani shoe-maker was fined Rs 50,000 by authorities for violating the country's Wildlife Act for making sandals out of snakeskin, meant as an Eid gift for the country's prime minister Imran Khan.

Officials from the Wildlife Department in Khyber Pakhtunkhwa raided the shop Nooruddin Shinwari in Jehangir Pura Bazar in interior Peshawar City and confiscated two pairs of traditional Peshwari sandals, made from snakeskin.

Such sandals are famously known as 'Kaptaan special chappals' and the snakeskin shoe was made as Eid gift for the cricketer-turned-politician by the shoe-maker.

He claimed that the serpentine material had been sent from the US to his shop to craft two pairs, one for the donor and one for Prime Minister Khan to slip on.

The department took action against Shinwari, after a District Forest Officer (DFO) went to his shop as a decoy customer on Sunday and asked for a pair of sandals from the salesman. He seized the sandals and later sent them to the lab for verification.

However, Shinwari got the sandals back on Monday, after paying a hefty fine of Rs 50,000 and signing an affidavit that he would not use the skin of an exotic animal in footwear again.

"I have got the chappal (sandals) back after paying a fine of Rs 50,000 and now I will present it to Prime Minister Imran Khan as an Eid gift," Nooruddin was quoted as saying by the DawnNewsTV.

Confirming this, a Sub-Divisional Forest Officer Amir Ali said that "the craftsman was slapped a fine of Rs 50,000 after it was found that the sandals were made of python leather."

"The shopkeeper has no documents to establish that the snakeskin was imported," he was quoted as saying in the report.

Shinwari was also warned against using the skin of wild animals in the future and made to sign an affidavit attesting that he would not use the skin of wildlife creatures again, he added.

The sale and purchase of snakeskin is illegal under Pakistan's Wildlife Act, 2015. According to the Act, no one is allowed to possess any wild or exotic animal (dead or alive) without a valid certificate or licence.

In 2015, the traditional Peshawari chappal or sandal was launched by Shinwari as Kaptaan Chappal.

"No matter who the sandals were being made for, an illegal act would never be tolerated," Khyber Pakhtunkhwa Minister for Environment Ishtiaq Urmur had said.

"If it is proven that the chappals were indeed made of snakeskin then the cobbler will have to face legal consequences as well as a fine provided he shows necessary documentation that it was (legally) imported," he said after the report emerged.