Once You Join BJP, There Will Be No Cases, No CBI, No ED, No I-T: Mamata Banerjee

Speaking before ending her ‘dharna’, she alleged that the BJP is "blackmailing" people by using central agencies like the CBI against them and then getting them into the party fold. 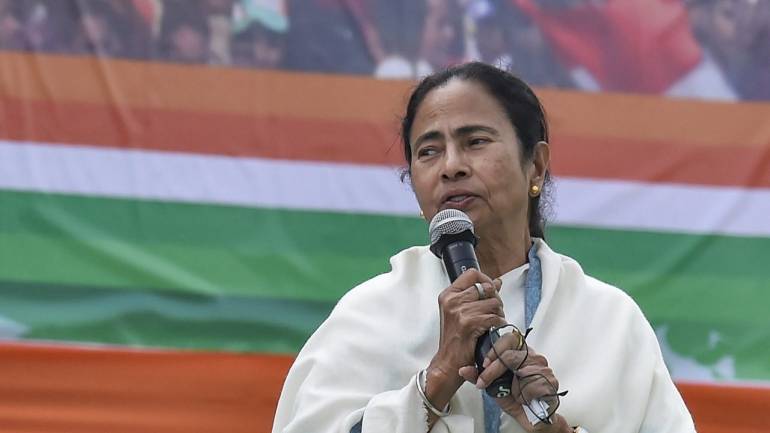 West Bengal Chief Minister Mamata Banerjee Tuesday alleged that the BJP is "blackmailing" people by using central agencies like the CBI against them and then getting them into the party fold.

Banerjee said she has "great respect" for the CBI and urged it to speed up its probe into theft of the Nobel medal of Rabindranath Tagore with the same alacrity with which, she alleged, the agency executes the orders of Prime Minister Narendra Modi and BJP national president Amit Shah.

The Trinamool Congress supremo, was speaking before ending her three-day dharna (sit-in protest) near the Metro cinema in the city's Esplanade area against the CBI's attempt to question Kolkata Police chief Rajeev Kumar in connection with the chit fund scams.

She said once the people who are being blackmailed by the BJP join the saffron party, the cases lodged against them by the central agencies are dismissed.

Banerjee, who came to power in West Bengal riding the crest of the anti-farmland acquisition wave at Singur and Nandigram, alleged that political vendetta is working behind the CBI going slow on its investigations into the Tapasi Malik's death at Singur and into the Nandigram killings.

Malik, a teenager and part of the Trinamool Congress-led Save Farmland Committee, was raped and killed at Singur in December 2006 during the agitation against the acquisition of farm land by the government for Tata Motors' small car factory.

"Its been a number of years that the Nobel medal has been stolen and you (CBI) are yet to give us any result. I request you to speed up the investigation into it in a manner similar to the one you adopt when it comes to directives by Narendra Modi or Amit Shah," Banerjee said.

The Nobel medal was stolen from Shantiniketan in 2004 and is yet to be recovered.

On allegations that Uttar Pradesh Chief Minister Yogi Adityanath was denied permission to land his helicopter for two rallies at Raigunj and Balurghat in West Bengal on Sunday, she said the BJP seeks permissions for holding rallies and public meetings at the eleventh hour which do not give much time to the administration.

She said the BJP applies for permission without checking whether there is any other programme fixed from an earlier time. Once they have applied they want the permission for it right away, she added.

Banerjee said she has no problem with chief ministers of other states visiting West Bengal, but Adityanath should take care of his state before thinking about others.

"The chief minister of one state can go to another state for a meeting. But Yogiji must concentrate on his state before thinking about West Bengal," she said.

Referring to BJP national president Amit Shah's Malda January 22 public meeting in the state, the TMC supremo, without naming him, said, "We never objected when you (Shah) came here to address a rally just after getting out of hospital where you were treated for swine flu. Swine flu is a vector borne disease.

"Also Ive heard that even BJP workers were not allowed to go near to you (Shah)," Banerjee said and recollected instances when she was denied accommodation in Maharashtra and Bihar in the past where she had gone to participate in rallies.

The chief minister alleged that pressure is being created on companies to cancel agreements to provide helicopters to Trinamool Congress during the upcoming general elections.

She said TMC had given advance money for booking choppers for two occasions and the company has returned the money in both cases.

"Why are they (BJP) so scared ? Of what? This way they will not be able to stop me. Such cancellations will not help BJP as I will walk or take a cycle. Or I may go online - there is the social network and the digital platform," Banerjee added.