The alarmed HP government has decided to assign the task of assessing the mountain-related hazard risks to the Geological Survey of India (GSI), and premier institutes like IIT Mandi. 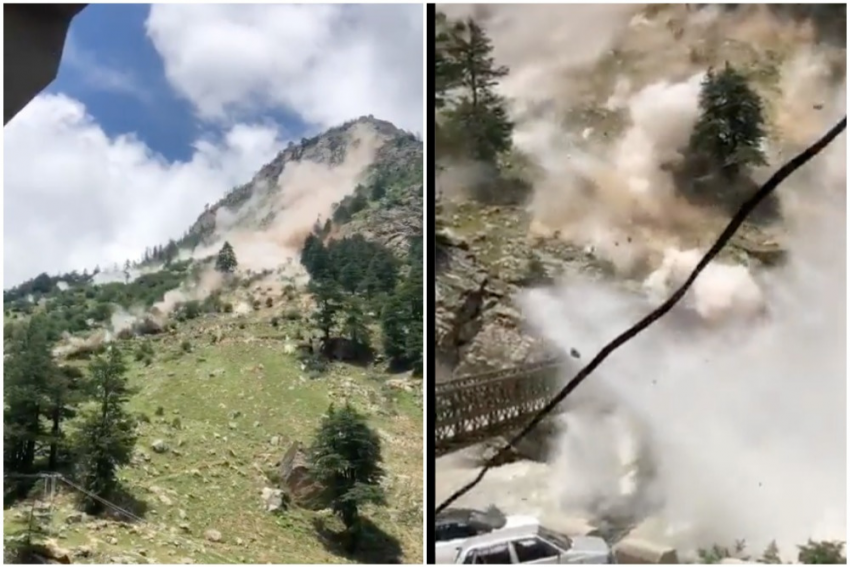 Is Himachal Pradesh really safe for travel? Live images and viral videos of massive landslides amid frequent reports of fatalities and mountains cracking up have left tourists concerned and the state authorities alarmed.

About 435 fatalities - the highest ever in the state in the past five years during the monsoon - have taken place this year.  Several National Highways remain blocked due to recurrent landslides, bridges have been smashed by falling rocks and tourists vehicles wrecked by debris.

The situation is alarming for the state, which has its economy largely dependent on tourism and horticulture.

An increasingly concerned state administration has decided to assign the task of assessing the mountain-related hazard risks to the Geological Survey of India (GSI), and premier institutes, including IIT Mandi to find a scientific solution to the problems of massive landslides.

The decision came after Prime Minister Narendra Modi during a video interactive session on state’s vaccination success asked Chief Minister Jai Ram Thakur to work out a plan to assess the risk factors in the state.

During a recent visit to the state, President of India Ram Nath Kovind also drew the attention of the state government towards recurrent landslides in some of the districts that were taking a massive toll on lives.

"I am taking this issue forward with the help of the scientist organisations. There is not only the need to assess the vulnerabilities and take steps to prevent them but also to develop early warning systems to prevent them and reduce their impact on human lives," State's chief secretary Ram Subhag Singh said. "It is now an accepted thing that most of these hazards are related to climate change," he added.

The early warning system—which the state’s Department of Science, Technology and Environment has proposed to develop, is an adaptive measure for climate change, using integrated communication systems to help communities prepare for hazardous climate-related events. A successful EWS can save lives and jobs, land and infrastructures and supports long-term sustainability, Singh said.

“The residents, as well as the tourists visiting Himachal Pradesh, have a fundamental right to life and it is the duty of the State government to take all those precautionary measures, which can prevent the landslides and stop any further loss to life and property of the citizens” she pleaded.

Maniktala alleged that experts have recommended remedial measures to prevent landslides in various reports. These include 'Landslide hazard Risk Management Report, 2015' based on a study conducted by Dr. A.K.Mahajan, Professor(Environmental Sciences), report by the Geological Survey of India with respect to the road cave-in at Kali Dhank area in PaontaSahib-Shillai road and a report of the Abhay Shukla Committee constituted by the High Court to study the impact of the establishment of Hydroelectric Projects of mountain ecosystems.

“But the State and NHAI authorities are not taking into account these expert suggestions while undertaking massive developmental projects in Himachal Pradesh, especially highways involving large scale excavation of hills," Maniktala alleged.

The petitioner has prayed to direct the State to inform the Court about the implementation of the measures suggested by the experts in the aforesaid reports. She has also asked them to engage the services of the Wadia Institute of Himalayan Geology, Dehradun - the leading expert Institution in the field - to conduct a study of zones prone to landslides and suggest measures for preventing them.

"We have also asked the court to order the state to install Landslides Predicting Devices as have been developed by IIT, Mandi in all the landslide-prone areas,” the activist told Outlook.

Two major landslides in Kinnaur, which claimed more than 35 lives, nine of them tourists, recently shook people who watched the live footage of he incident on social media. Lahaul-Spiti, another high altitude district, also faced landslides which blocked the flow of the Chenab river. National Highways like Chandigarh-Shimla and Chandigarh-Kullu-Manali-Leh and Shimla-Kinnaur are highly risk-prone

Mansi Asher, an environmentalist, attributes landslides to massive construction of hydro-power projects, and the incessant tunnelling and blasting of the mountains in the name of 'development'.

Amit Kashyap , Director (Tourism) admits that landslides during the past two months have adversely impacted the tourists' inflow in the state. "Tourists will naturally not like to travel to places prone to the risk of landslides, flash floods, or other natural calamities, be it in Himachal Pradesh or Uttarakhand".

A similar pattern of natural calamities has been observed in Uttarakhand in the recent past.