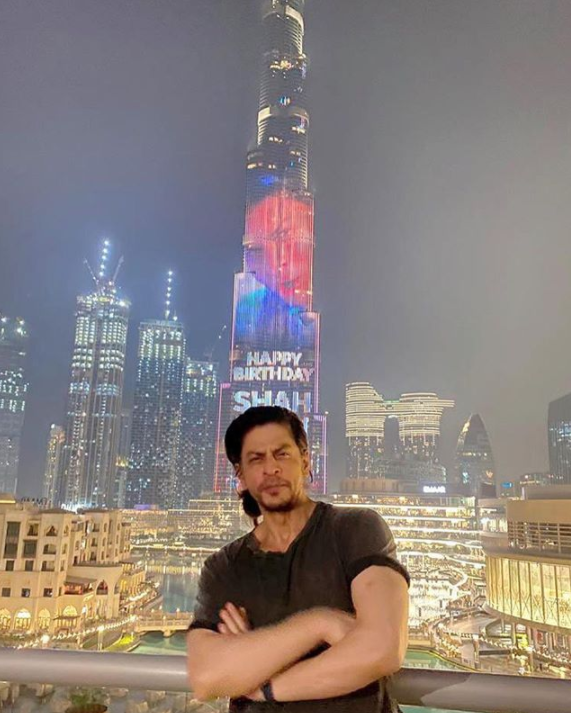 No one, or no building, is prone to the Baadshah of Bollywood's charm. As the world came together to wish Shah Rukh Khan on his 55th birthday yesterday, Dubai's iconic skyscraper Burj Khalifa lit up with his name and videos to mark the celebration.

The actor rang in his birthday in Dubai with his family and posed in front of the world's tallest structure. He shared a picture of him standing against a sparkling and illuminated Burj Khalifa on Instagram:

It’s nice to see myself on the biggest and tallest screen in the world. My friend #MohamedAlabbar has me on the biggest screen even before my next film. Thanks & love u all @burjkhalifa & @emaardubai . Being my own guest in Dubai... my kids mighty impressed and me is loving it!

The edifice was glistening with the message "Happy Birthday Shah Rukh Khan" in its noted vibrancy.

"It’s nice to see myself on the biggest and tallest screen in the world. My friend #MohamedAlabbar has me on the biggest screen even before my next film. Thanks & love u all @burjkhalifa & @emaardubai. Being my own guest in Dubai... my kids mighty impressed and me is loving it!" SRK writes on his post. The tower lit up on SRK's last birthday too as an ode to the actor and his legacy.

The actor took to social media to express gratitude to his fans.

"How much love you guys are spreading, especially SRK Universe, Team SRK FC, SRK Chennai FC, SRK Warriors, SRK Fan Association...to all of you, you know who I mean, all of you, together all the loving fans and all the boys and girls. More than wishing me on my word, some of the work you're doing, giving your time and resources to people who are in need right now...I think that's the most wonderful work you can do, because you can't be a lover boy like me without spreading love. So thank you all of you for spreading the love...," he said in the post.