There’s a new twist to the monkey menace plaguing the tourist destination. Be prepared to barter hard to get your belongings back 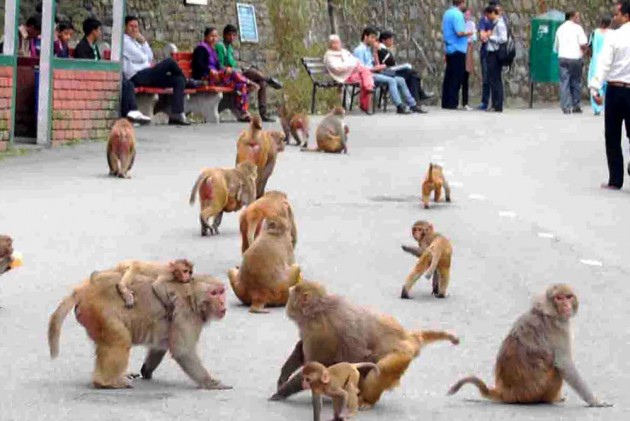 Perhaps it was short-sighted. Perhaps it was hungry. Maybe it was both. Whatever the reason, a tourist strolling past the Indian Coffee House on Shimla’s crowded Mall on Saturday got the fright of his life when a monkey jumped out of nowhere and snatched his spectacles off his nose.

While other tourists scrambled for cover, local residents reassured the startled tourist that all he needed to do was to offer the monkey some food (ice cream is a hot favourite) in return for his spectacles. And sure enough, it worked.

“The locals joined in and advised the tourist (who fell prey) to the monkey trick. Offering some eatables in exchange to get the spectacles back is an acceptable option, to which the simian responded,” recalls Swati Dogra, a media professional who was at the scene.

“This particular animal must a new one, as three days back they had caught a rogue monkey who had targeted dozens of bespectacled tourists, snatching them off their noses and bartering them for eatables. Some citizens had lodged a complaint about this monkey on toll-free number of the wildlife department,” said Divisional Forest Officer (Wildlife) Krishan Kumar.

That monkey is still with the department and kept at the wildlife rehabilitation centre, Tuti Kandi (Shimla). It will be released in the forest area shortly. Normally, the monkeys are dropped back/or released at the same place where they are caught. “But, this particular monkey can’t be released in the town as his behaviour shows he has had turned rogue. Second, it is also not part of any monkey herd. The citizens will be relieved of one menace, at least,” he said. “But if something similar happened on Saturday, this could be another monkey.”

It turns out that snatching spectacles and holding them hostage for edibles isn’t new either. In fact, locals assert that both these monkeys are probably from Jakhu Hill, about two  km outside the city and home to an ancient Hanuman temple.

Visitors taking the scenic trail up to the temple are warned to hide their belongings, including spectacles because the monkeys there are known to snatch anything they can find and hold it for ransom in the form of food. In fact, tourists are also advised to carry sticks to ward off the aggressive monkeys and keep their shoes and other valuables in the lockers provided before entering the temple or risk losing them.

“I think those rogue monkeys at Jakhu temple have now come down to the Mall for an easy and choice fast food, like ice-cream, pizzas, pastries and burgers,” opines well-known local conservationist B S Malhans.

Some citizens recall how in 2014 a mischievous monkey started raining currency notes from the rooftop of a Shimla building after having robbed someone of his wallet.

So if you’re planning to visit Shimla this summer, be prepared for some monkey business.