The educational institution will be christened 'Jai Hind University', Mamata Banerjee said during a virtual felicitation ceremony for meritorious students. 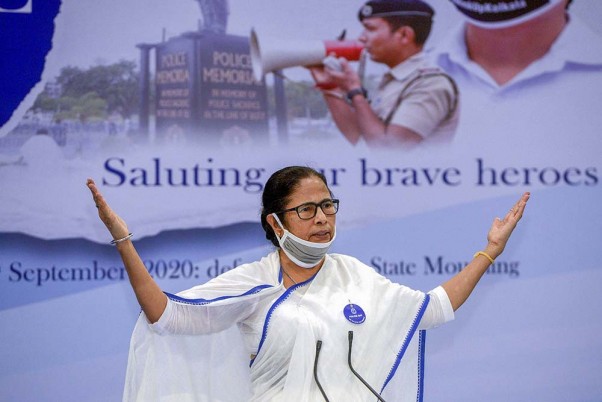 West Bengal Chief Minister Mamata Banerjee on Monday said her government will set up a university to honour the contribution of Netaji Subhas Chandra Bose and his Indian National Army in the country's freedom movement.

The chief minister also said she is in favor of setting up a university in the name of B R Ambedkar in the future.

"We already have higher educational institutions named after stalwarts like Rabindranath Tagore and Kazi Nazrul Islam near his birthplace in Paschim Bardhaman. The Jai Hind University... will remind about the contributions of Netaji and his 'Azad Hind Fauj' (Indian National Army)," she said.

"Our government has set up 30 universities, and more will come up. We are building one university for the Matua community members as well," Banerjee said.

Banerjee, while congratulating the students of state-run boards for their success, asked the district magistrates to ensure that any appeal for financial help should be processed on time.

"Here is a standing instruction, no poor student's education should be held up for financial reasons. If necessary, the CM's fund should be used," she said.

Listing out the various steps taken by the West Bengal government for helping poor students, she said 1.3 lakh students have benefitted from the Swami Vivekananda Scholarship.

Banerjee said when the UGC had stopped grants for Ph.D. students, the state's higher education department came to their rescue. "It also created a scholarship for general category students faced with financial stress".

She said the 'Kanyashree' project, which has been acclaimed by the UN and UNESCO, has so far helped 67 lakh girls of the state.

Urging students to look for employment opportunities within the state after passing out, Banerjee said there will be no dearth of jobs for them in West Bengal.

"Some people may spread canards against Bengal, but they won't succeed. I urge the students that wherever you go in the future, don't forget Bengal," she said.

The chief minister told the students to consider taking up careers in healthcare and administrative services.

Banerjee also announced that every meritorious student will be given a laptop, wristwatch, and books, which will be personally handed over to them by the administration.