Locust Threat: How Centre And States Battling The Insect Attack

After damaging crops in Rajasthan and Madhya Pradesh, swarms of locusts entered Uttar Pradesh amid what is being described as the worst attack in 26 years. 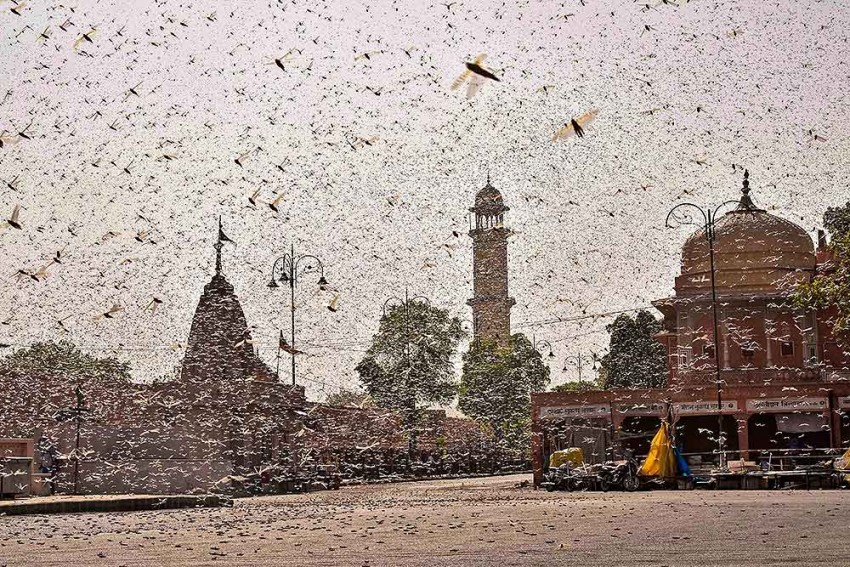 Swarms of locust in the walled city of Jaipur, Rajasthan. More than half of Rajasthan’s 33 districts are affected by invasion by these crop-munching insects.
PTI Photo
Outlook Web Bureau 2020-05-28T15:44:10+05:30 Locust Threat: How Centre And States Battling The Insect Attack 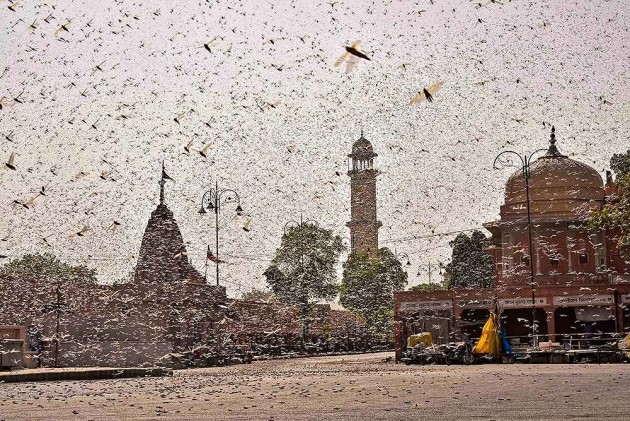 Swarms of locusts from Pakistan entered Rajasthan last month, affecting several districts and then spreading to other western and northwestern states, damaging crops and agricultural livelihood in the worst attack in 26 years.

It said that around 200 Locust Circle Offices (LCO) are conducting survey and control operations in close coordination with the district administration and agriculture field machinery of the affected states. Locust control operations are in full swing in coordination with the state agriculture departments and local administration. So far, 89 fire brigades for pesticide spray; 120 survey vehicles; 47 control vehicles with spray equipments and 810 tractor mounted sprayers have been deployed for effective locust control. It will also deply drones in the work.

Besides, several states have created their own strategies to deal with the locust threat. States like Delhi and Chhatisgarh are on alert for possible locust attack and are taking preventive measures focused on the use of pesticide. Here's how some of the affected states are battling the swarms:

Chief Minister Yogi Adityanath has issued directions to district magistrates of bordering districts of Uttar Pradesh to take appropriate measures. The state government has set up a Disaster Relief Team, headed by the Deputy Director, Agriculture Directorate, to deal with locust attacks in various parts of the state.

Teams have been formed and control rooms established to track the movement of locusts at the state level. At the district headquarter level, a nodal officer has been appointed, and a task force and control-room already set up.Instructions have been issued to officials to list and circulate elaborate details about the dangers posed by locusts and precautions need to be taken. An advisory was also issued to beat drums, tin containers, metal plates and create noise to shoo the locusts in case of an attack.

Swarms of locusts are being scared away by the district administration in Panna using police sirens. These insects were seen in Panna Tiger Reserve on Wednesday where they attacked wild plants and trees. Authorities said they only way to prevent the locusts from damaging crops was to create loud noises or to spray insecticides.

The state Agriculture Minister Kamal Patel said the government is planning to declare the locust swarm attacks as natural disaster, following a survey on the losses accrued to them.

The Rajasthan agriculture department on Wednesday deployed a drone to spray pesticides on swarms of locust in Jaipur district. More drones are supposed to be deployed in the coming days. Around 800 sprayers-mounted tractors, 54 vehicles of the locust warning organisation - Jodhpur, and fire brigades are being used in locust control in the state.

Over half of the districts in Rajasthan have been affected by locusts. Locusts are rapidly travelling to far-flung areas and reached Jaipur, Dausa, Karauli in search of food because there are no standing crops in fields.

The Centre's locust warning organisation- Jodhpur and the state agriculture department are working in coordination to handle the locust attack issue.

The state government has sanctioned a sum of Rs 1 crore for containing locust attacks, officials say. A detailed action plan to check the invasion of locust swarms has been prepared by the state agriculture department as well.

As part of the plan, agriculture officers have been asked to maintain strict vigil in their respective areas. Surveys will be conducted, especially in areas bordering Pakistan and Rajasthan. Spray pumps will also be made available by the agriculture department to villagers to effectively contain any locust attack.

Swarms of locusts that had entered Katol and Parseoni in Nagpur district of Maharashtra over the last four days, have now moved to the neighbouring Bhandara district.
Besides tracking the movement of locusts, officials are now trying to displace the pest from agricultural fields. The state has started 'Operation Locust Control' by
spraying pesticides through fire tenders and using flood lights.

'Letters To Mother': PM Modi's New Book Sheds Light On What He Wrote To 'Jagat Janani'