This is the first time Himachal Pradesh has chosen to impose an entry fee in the high altitude tribal district witnessing a massive influx of tourists after commissioning of the Rohtang Tunnel.

The tourists, snow revellers and bikers coming to the picturesque Lahaul valley via the World famed fascinating Rohtang Tunnel will not be able to enjoy nature's beauty and facilities here without being charged an entry fee.

The administration at Lahaul-Spiti has imposed entry fee on all the tourist vehicles bearing out-of-state registration numbers. They will be levied entry fee ranging between Rs 50 to 300 per vehicle. The tourist buses will have to pay a higher fee upto Rs 500.

This is the first time Himachal Pradesh has chosen to impose an entry fee in the high altitude tribal district witnessing a massive influx of tourists after commissioning of the Rohtang Tunnel.

Sub-divisional Magistrate Priya Nagta, when contacted, said “Lahaul-Spiti has been witnessing a huge influx of tourists and persons travelling to Leh –Ladakh, who use the valley as transit. Since the area is now attracting massive foot fall, which is expected to see a rise in the snow season, we propose to create facilities like toilets and wayside amenities out of it”.

“The locals and those having registration numbers from Himachal Pradesh will not be asked to pay. Few having got vehicles registered outside but hail from the state /or Lahaul ,will also be exempted .They need to apply to the SDM Lahaul for seeking exemption,” she told Outlook over phone . 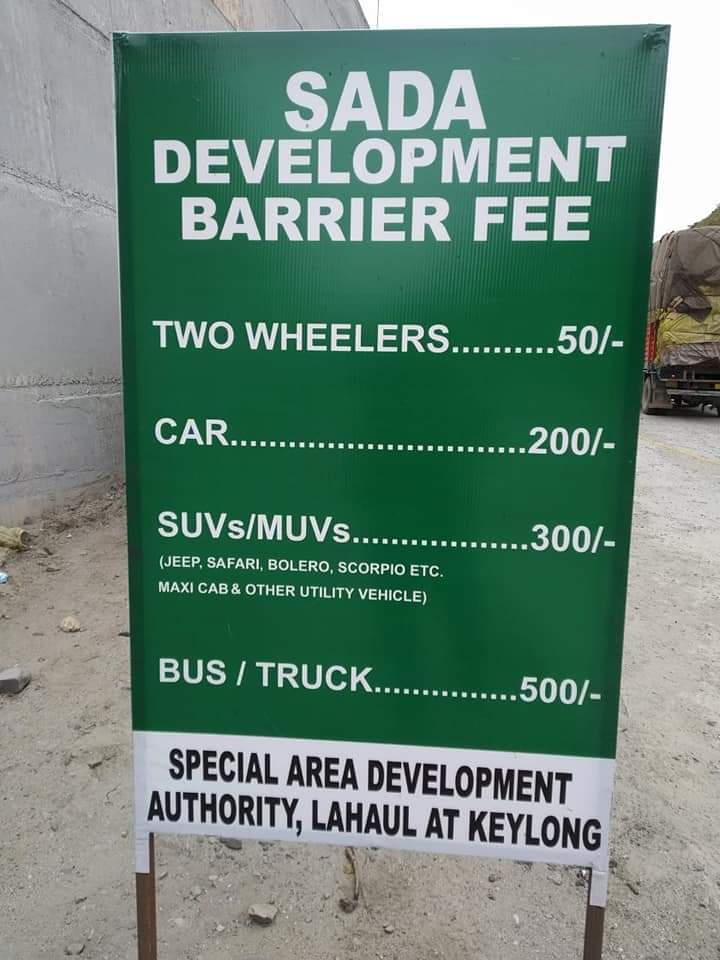 The Motorbikes are being charged Rs 50 while the tourists coming in cars will have to pay Rs 200 to enter Lahaul. The entry fee of SUVs and MUVs has been fixed at Rs 300.

The charges will apply to all the vehicles going towards Lahaul, Leh, Pangi, and Kishtwar using this route.

Asked as how much fee (amount) generation was being expected under the scheme,she said “ we are not fully sure but it will largely depend on the footfall.”

The fee, Priya Nagta said will be charged under the Special Area Development Authority (SADA). A barrier has been set-up at Teiling village located in Sissu, which is a gateway to Lahaul valley after crossing Rohtang Tunnel towards the north portal.

The tunnel, built at a height of 10,000 feet is an engineering marvel of its kind and a dream project of former Prime Minister Atal Bihari Vajpayee. Its foundation stone was, however, laid by UPA chairperson Sonia Gandhi in June 2010 when Prem Kumar Dhumal was Chief Minister.

During the Covid time, the local panchayats had taken a proactive step to ban all tourist activities in the Lahaul valley.

Earlier, a huge influx of tourists in the valley had created massive environmental pollution.

Currently 150 to 200 vehicles enter Lahaul valley on a daily basis, many of them headed to Sissu while others are bound to Leh.