Only three chief ministers in Karnataka have been able to serve full tenures and of them two dissolved their governments in their last year in office. 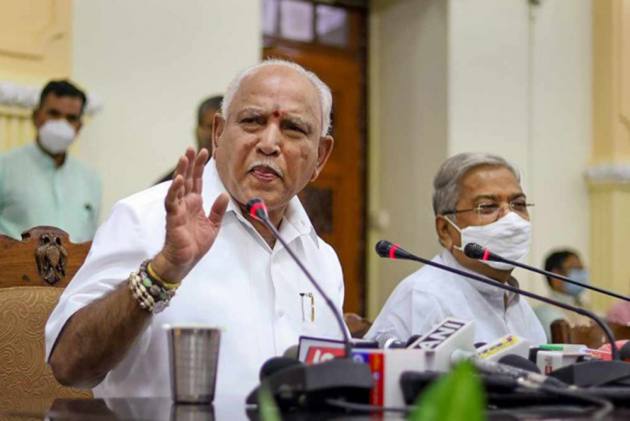 As B S Yediyurappa marked his second year as Karnataka Chief Minister on Monday, the political backdrop of the occasion was brimming with suspense. Until then, the CM’s short bytes to reporters-- that he was awaiting word from the BJP high command about whether he should continue or quit – had kept the guessing game alive. Hence, all eyes were on the commemorative event today.

Yediyurappa didn’t dwell much on the celebratory occasion at hand but settled into what was actually his valedictory address – tracing the early days of his long career when he was the BJP’s lone MLA in Karnataka and before that, his entry into politics via a municipal election in Shikaripura, the town in Karnataka’s Shimoga district that has been his stronghold since.

Currently, there’s a little under two years of tenure left for the BJP government in Karnataka and speculation is rife about who will step into Yediyurappa’s shoes. But even so, the ongoing political riddle only brings to the fore a peculiarity that has marked Karnataka’s feisty politics for decades – the fact that very few CMs, only three to be precise, have served out their full tenures.

Look closer still and apply some technicality and it turns out that only one of these three actually achieved a full five years between elections – this was Siddaramaiah (2013-2018) because the other two S M Krishna (1999-2004) and Devaraj Urs (1972-1977) dissolved their governments in their last year in office.

Of course, that’s only the dry numbers speaking – the rough and tumble, intrigue, manoeuvres and circumstances that punctuated every change of guard is an entirely different story. Indeed, there have been Chief Ministers who held on with dexterity -- Congress leader Devaraj Urs occupied the top seat for nearly eight years at a stretch in the 1970s with just a two-month interregnum of President’s Rule in 1978 during which elections were held and he came back to power. The Janata Party’s Ramakrishna Hegde too served five straight years (though he resigned twice in between with dramatic effect and bounced back each time) during the 1980s.

Take Yediyurappa himself – so far, he has clocked a cumulative five years as CM across four stints as CM. But only two of these actually count – in 2007, he was in the top seat for just a week while in 2018, it was only for a couple of days.

Several factors indeed contributed to Karnataka’s long list of CMs, political observers say. “The major reason is the state is divided on caste lines,” says P G R Sindhia, a veteran of Karnataka politics who has been in several political parties. Generally, those who were able to take many communities along – outwardly, at least – were able to hold on for longer, he reckons.

“There are obviously many interests and they have to bring them together,” says political commentator Narendar Pani. “The ability of a state leader to do it is difficult because they necessarily come from one or the other part of the state.”

Then, within political parties, the balance of power between the national leadership and local leaders. The Congress, Janata party and BJP – all national parties -- have helmed the state at various points and the tenure of CMs too have reflected these dynamics. “I would think that in states where there are diverse local interests and a strong centre, this would happen,” says Pani. In the early 1990s, for instance, the Congress had three chief ministers in a single term. A decade ago, the BJP too went through three CMs in the space of five years.

Currently, the question is who will the BJP pick as its leader in the state – again, these factors apply. The other key point that will be weighing in on the political calculations is that state elections are not too far away.