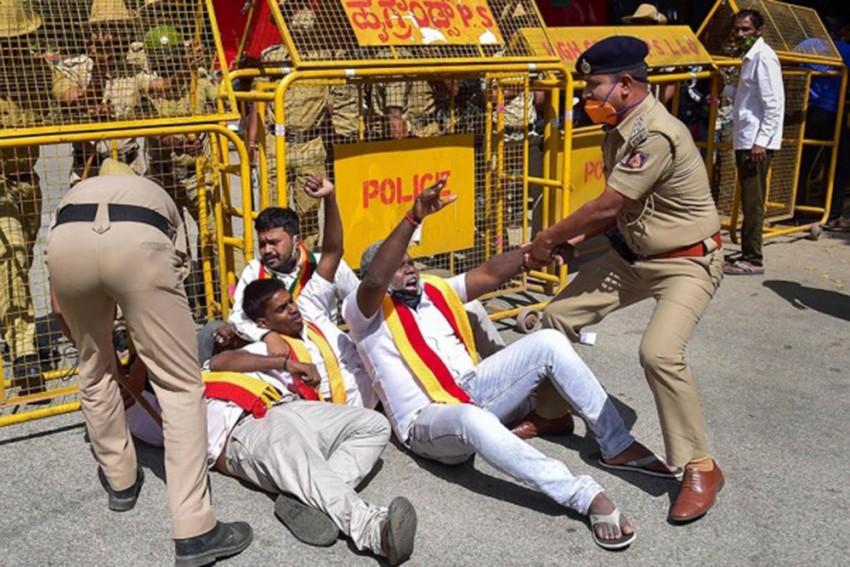 Police detain pro-Kannada activists as they protest against the State Government over sanctioning of the fund to form the Maratha Development Board, in Bengaluru.
PTI
PTI 2020-12-05T10:37:44+05:30 Karnataka Bandh: Protests Staged In Bengaluru, Transport Services Not Disrupted 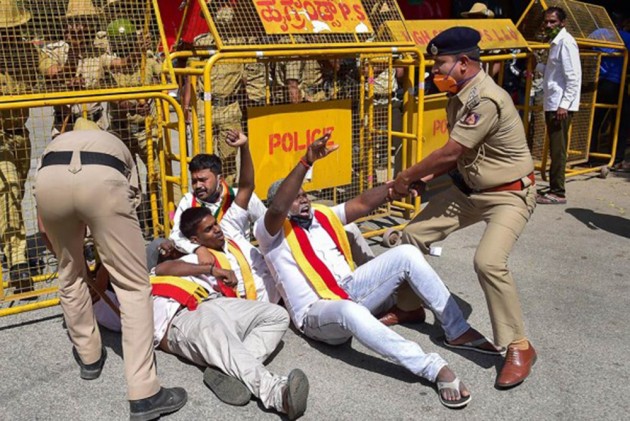 The state-wide bandh organised by pro-Kannada groups in Karnataka on Saturday, opposing the government's decision to create a corporation for the Maratha community in the state has had no major impact on normal life so far, other than the state witnessing sporadic protests.

Auto rickshaws, cabs, public transport buses and metro services in the state have not been disrupted. Hotels and provision stores have also remained open. Though scarce, there is movement of vehicles on roads in various parts of the capital and similar reports have come from other parts of the state.

Activists of several Kannada organisations who gathered near the city's Town Hall for staging demonstrations were detained and taken away by the police. Protests have also been reported in Chamarajanagara, Bengaluru Rural, Gadag, Koppa, Hassan, Ramanagara, Chitradurga, Davangere, Bagalkote, Chikkamagaluru and Mandya districts.

A coalition of Kannada organisations led by Vatal Nagaraj, have also planned to hold a protest rally in Bengaluru from Town Hall to Freedom Park, against the government's decision, later in the day.

Police have made elaborate security arrangements in the city to ensure that no untoward incidents takes place. Security has been beefed up around the chief minister's official residence and home office, where some activists have planned to lay siege.

Chief Minister B S Yediyurappa is in Belagavi to attend the BJP's state executive meeting. Yediyurappa on Friday had urged the pro-Kannada groups not to go ahead with the bandh, calling it "unnecessary", as he asserted that the interests Kannadigas and promotion of Kannada was his government's utmost priority.

The government had earlier announced the setting up of the Maratha Development Authority, but subsequently changed it to corporation, as an authority has to be constituted by a law--by passing an act in the legislature.

Despite opposition, the government following the cabinet approval has even issued a formal order establishing the Maratha Development Corporation, allocating Rs 50 crore to the body, a move that has further irked the pro-Kannada groups.