With the resignation of two more MLAs -- Dr K Sudhakar and MTB Nagaraj -- the crisis in the government deepened, but DK Shivakumar told the reporters that he had known rebel MLAs for 40 years and was confident of taking them back to Karnataka. 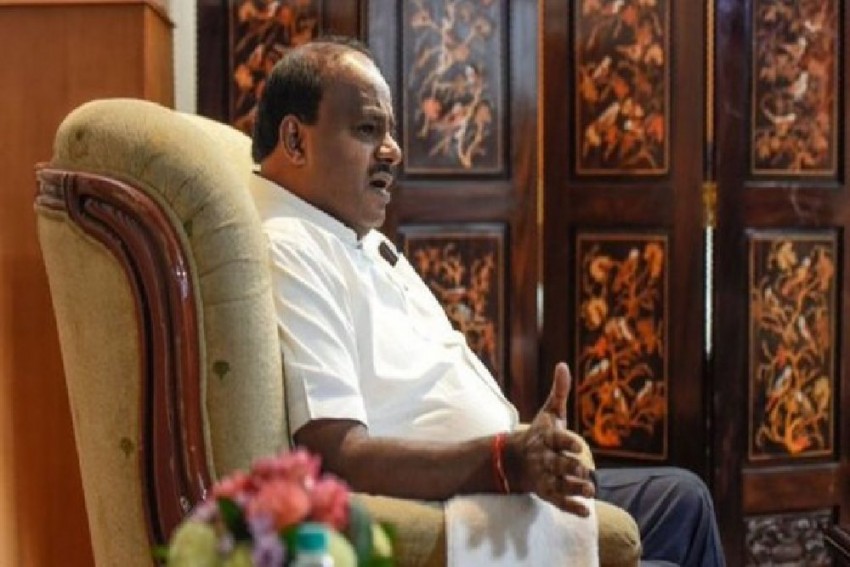 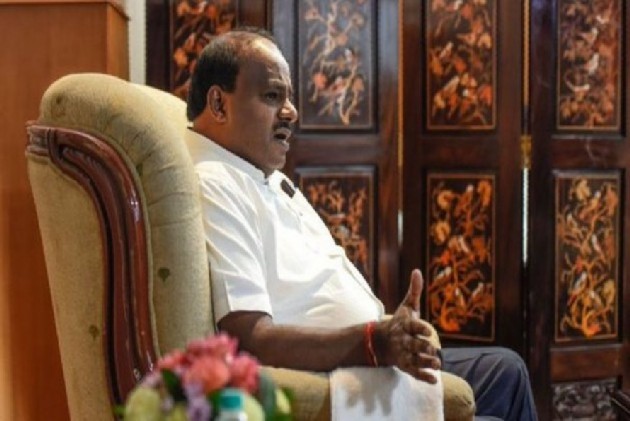 Resignations from the ruling Congress-JD(S) coalition government in Karnataka continued coming in on Wednesday even as Minister DK Shivakumar pulled out all stops to meet the rebel MLAs -- currently lodged in a Mumbai hotel -- but to no avail.

With the resignation of two more MLAs -- Dr K Sudhakar and MTB Nagaraj -- the crisis in the government deepened, but Shivakumar told reporters that he had known rebel MLAs for 40 years and was confident of taking them back to Karnataka.

Former chief minister Siddaramaiah, later in the evening, said Sudhakar hadn't become a BJP leader just because he resigned. "As a CLP leader, I was trying to convince him," he said after a video showing Siddaramaiah and other Congress leaders trying to convince Sudhakar surfaced. The BJP alleged that the former CM and other Congress leaders had "manhandled" the MLA.

Siddaramaiah hit back, saying PM Narendra Modi and Home Minister Amit Shah were behind "defections and threatening our MLAs."

Siddaramaiah, Congress: What made BJP people do rowdyism like that? BJP MLAs and workers are rowdies. I condemn it. It is quiet evident that BJP leaders, Amit Shah and Narendra Modi are behind all this. They are defecting and threatening our MLAs. https://t.co/U4Kpx4sRRL

Earlier in the day, security personnel, camera crews, media personnel and political workers jostled with each other outside the luxury hotel that has become the centrepiece of the crisis in Karnataka. Slogans of "Shivakumar go back" were raised and some people clambered on to the high gates of the hotel on the outskirts of the city.

Shivakumar was being interviewed by a TV channel when he was almost pulled away by Mumbai Police and detained. Former Union minister Deora and former Maharashtra minister Khan who had come to meet him were also detained.

All three were taken to the BKC police guesthouse.

Shivakumar had reached the hotel at 8.20 am but was stopped by police from entering. His plea that he had a valid reservation in the hotel fell on deaf ears.

Officials, it is learnt, told Shivakumar the rebel legislators had written to the Mumbai police chief that they feared a threat to their lives due to his arrival.

But Shivakumar, who was accompanied by senior JD(S) MLAs stood his ground, saying that politics is an art of the possibility and he would not leave without meeting friends.

He told reporters he had "come in peace" and had no intention of threatening the rebel MLAs.

He added that he had come unarmed and just wanted to have coffee with his friends. "I don't want to harm anyone," he said.

"I haven't brought any security force or weapon, I only have my heart with me. I want to meet my friends and have coffee with them. If the BJP is not involved then why are we not being allowed to enter," he said?

As the showdown intensified, an e-mail from the hotel to the travel agency which had booked a room on Shivakumar's behalf revealed that the reservation was cancelled due to "some emergency".

Ten of the 12 MLAs in the hotel have written to Mumbai Police, saying they feared a threat to their lives and Shivakumar should be prevented from entering the hotel.

"We have received a letter from the rebel MLAs," a senior police official said.

Mumbai Police had imposed prohibitory orders near the hotel where the rebel Congress and JD(S) MLAs from Karnataka are staying, an official said.

The entire stretch leading to the hotel was lined with security personnel and security had been stepped up since morning.

After standing for several hours with supporters holding aloft umbrellas, Shivakumar managed to sit precariously on the hotel boundary wall with his feet dangling over a stormwater drainage opening.

"Mumbai has a good government. Chief Minister (Devendra Fadnavis) is my good friend. I have booked a room here. My friends are here, some disputes are there, they are my friends...." he said.

Shivakumar noted that he had earlier played "host to 120 MLAs from Maharashtra when Vilasrao Deshmukh was the chief minister".

Twelve MLAs -- seven of the Congress, three of the JD(S) and two Independents -- are in the city since Saturday after resigning from the Karnataka Assembly and withdrawing support to the coalition government.

The legislators in their letter said they don't want to meet Karnataka Chief Minister H D Kumaraswamy or Shivakumar and requested the city police not to allow them to enter the hotel premises, he said.

The political crisis in Karnataka has also reached the Supreme Court with 10 rebel Congress and JD(S) MLAs moving a plea, alleging that the state Assembly Speaker has been deliberately not accepting their resignations.

A bench headed by Chief Justice Ranjan Gogoi took note of the submission of senior advocate Mukul Rohatgi, appearing for the rebel MLAs, and assured him that it will see whether their petition can be listed for urgent hearing on Thursday.

Of the 14 MLAs who have resigned, 11 are from Congress and three from JD(S).

The ruling coalition faces the threat of losing its majority if the resignations of the rebel MLAs are accepted.

With the support of the two independents, who Monday resigned from the ministry, the BJP has 107 MLAs in the 224-member House, where the half-way mark is 113.

The Monsoon session of the Karnataka legislature would begin from July 12.