The ruling party, BJP, blamed the "forces of anarchy" for creating unrest to shore up "their shrinking political footprint". 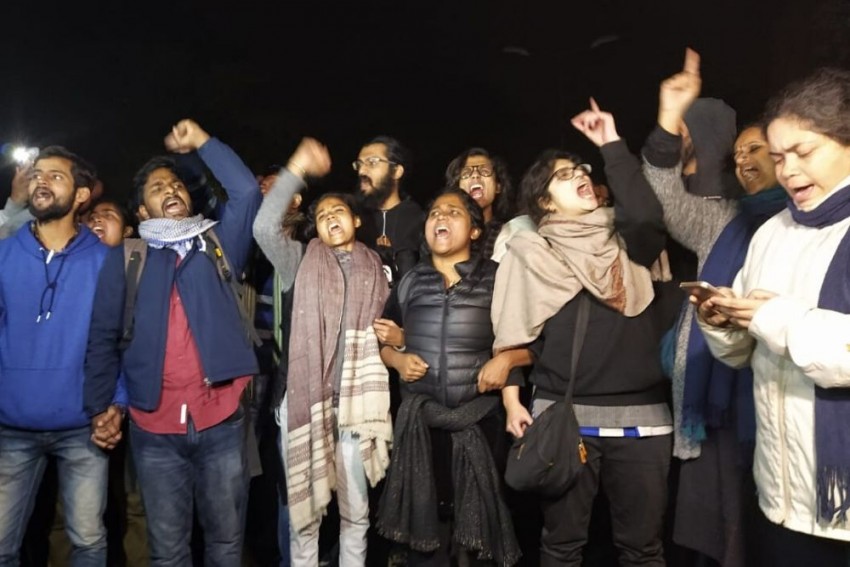 Opposition parties on Sunday attacked the BJP over the mob attack on students and teachers in the Jawaharlal Nehru University, with Congress leader Rahul Gandhi alleging that "fascists" in control of the country are “afraid of the voices of brave students”.

However, the ruling party blamed the "forces of anarchy" for creating unrest to shore up "their shrinking political footprint".

Senior BJP leader and Finance Minister Nirmala Sitharaman, a JNU alumnus, described the violence as "horrifying" and asserted that the Narendra Modi-led government wants universities to be safe spaces for all students.

Violence broke out at the JNU on Sunday night after masked men, armed with sticks and rods, attacked students and teachers and damaged property on the campus, prompting the administration to call in the police.

"The brutal attack on JNU students and teachers by masked thugs, that has left many seriously injured, is shocking. The fascists in control of our nation, are afraid of the voices of our brave students. Today's violence in JNU is a reflection of that fear," Gandhi said in a tweet.

BJP spokesperson, Nalin Kohli, said violence in any form needed to be condemned but added that it was equally important to note that a certain group of people in the JNU subscribe to a "mindset that calls for dismemberment of India and considers death sentence of a known terrorist by the Supreme Court to be an act of murder".

These people are often called "tukde tukde gang", he said, and added, "obviously their ideology can't be one of peace. It must be ascertained as to what is their specific role in this culture of violence, especially in this specific incident today."

BJP and its affiliates refer to groups with alleged sympathy with Left and the Opposition as "tukde tukde gang".

In a late-night tweet, the BJP said, "We strongly condemn the violence on JNU campus. This is a desperate attempt by forces of anarchy, who are determined to use students as cannon fodder, create unrest to shore up their shrinking political footprint. Universities should remain places of learning and education."

The Left-controlled JNUSU and the ABVP, which is affiliated to the Hindutva group RSS, blamed each other for the violence that continued for nearly two hours.

CPI(M) leader Sitaram Yechury said reports point to a collusion between the administration and "goons" of ABVP to inflict violence on students and teachers.

It is a planned attack by those in power, which is afraid of the resistance provided by the JNU to its Hindutva agenda, he said.

"If it is happening on live TV, it is an act of impunity and can only happen with the support of the government. This is beyond belief," he said.

Congress leader Priyanka Gandhi Vadra met the injured JNU students at AIIMS and alleged that it was "deeply sickening" about the government that allowed violence inflicted on students.

"There is something deeply sickening about a government that allows and encourages such violence to be inflicted on their own children," Priyanka Gandhi tweeted.

Expressing her shock at the violence, Sitharaman tweeted, "Horrifying images from JNU — the place I know & remember was one for fierce debates & opinions but never violence. I unequivocally condemn the events of today. This govt, regardless of what has been said the past few weeks, wants universities to be safe spaces for all students."

External Affairs Minister S Jaishankar, also a JNU alumnus, tweeted, "Have seen pictures of what is happening in #JNU. Condemn the violence unequivocally. This is completely against the tradition and culture of the university."

West Bengal Chief Minister Mamata Banerjee also condemned the assault on students and teachers, terming it a "heinous act" and a shame on democracy.

"We strongly condemn brutality unleashed against students/teachers in JNU. No words are enough to describe such heinous acts. A shame on our democracy," Banerjee, also the TMC supremo, said in a tweet.