India's Military Might, 22 Tableaux To Be On Display At Republic Day Parade

Sixteen tableaux from various states and union territories will depict the geographical and rich cultural diversity of the country. 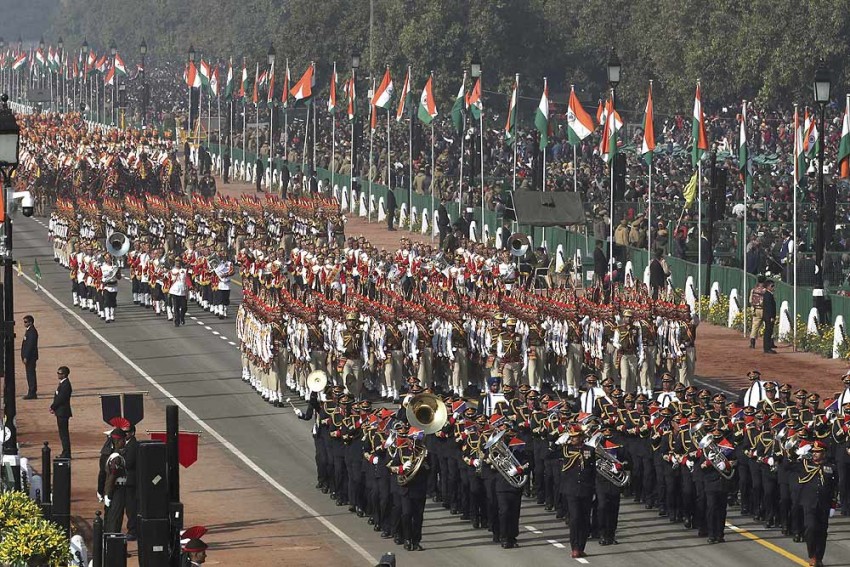 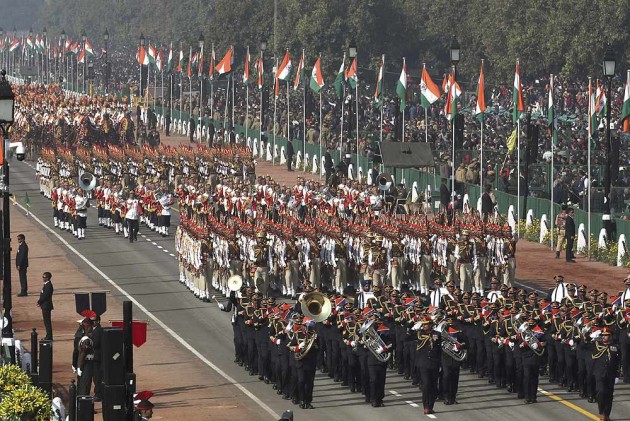 India's rising military might, rich cultural diversity and socio-economic progress will be on full display during the 71st Republic Day celebrations at the Rajpath -- the city's centrepiece boulevard -- on Sunday.

Brazilian President Jair Messias Bolsonaro will be the chief guest at the 90-minute celebrations marking the anniversary of the day when India was declared a republic in 1950.

The national capital has been brought under a massive ground-to-air security cover, with thousands of police and paramilitary personnel keeping a hawk-eye vigil.

Twenty-two tableaux – 16 from States and Union Territories and six from various ministries and departments - depicting the nation's rich cultural heritage and economic progress will also roll down the Rajpath.

School children will convey age-old message of yoga and spiritual values through dance and music during the parade, the defence ministry said.

The Republic Day Parade ceremony will commence with Prime Minister Narendra Modi visiting the National War Memorial near the India Gate. He will lead the nation in paying tributes to the martyrs by laying a wreath.

This is for the first time that the prime minister will pay homage to martyrs at the National War memorial instead of Amar Jawan Jyoti.

Thereafter, the prime minister and other dignitaries will head to the saluting dais at Rajpath to witness the parade.

As per tradition, the national flag will be unfurled followed by the National Anthem with a booming 21-gun salute.

The parade will commence with President Ram Nath Kovind taking the salute. The parade will be commanded by Parade Commander Lt General Asit Mistry, General Officer Commanding, Delhi Area. Major General Alok Kacker, Chief of Staff of Delhi Area, will be the second-in-command.

The first contingent in the uniform of the erstwhile Gwalior Lancers will be 61 Cavalry. The 61 Cavalry is the only active serving horse cavalry regiment in the world. It was raised on August 1, 1953 with the amalgamation of six state forces' cavalry units.

The Indian Army will be represented by a mounted column of 61 Cavalry, eight mechanised columns, six marching contingents and fly-past by Rudra and Dhruv Advanced Light helicopters of the army aviation wing.

The Naval contingent will comprise of 144 young sailors led by Lieutenant Jitin Malkat. It will be followed by the Naval Tableau titled 'Indian Navy - Silent, Strong, and Swift'.

The Air Force contingent, comprising of 144 air warriors, will be led by Flight Lt Shrikant Sharma. The Air Force tableau showcases scaled down models of the Rafale aircraft, the Tejas aircraft, the Light Combat helicopter, the Akash missiles system and the Astra missiles.

One of the main highlights will be the marching contingent of DRDO that will showcase Anti-Satellite Weapons (ASAT) - Mission Shakti.

Mission Shakti, India's first Anti-Satellite mission, was a major breakthrough in demonstrating the nation's capability to bring down hostile satellites.

Sixteen tableaux from various states and union territories will depict the geographical and rich cultural diversity of the country.

Various far-reaching reforms of the government including 'Start-up India', and 'Jal Jeevan Mission' will be showcased in six tableaux from different ministries and departments.

For the first time, a contingent of women bikers of CRPF will perform daredevil stunts. The contingent will be led by Inspector Seema Nag who will be seen saluting while standing atop a moving motorcycle.

The grand finale and the most keenly awaited segment of the parade, the Fly Past will comprise of the 'Trishul' formation by three advanced light helicopters.

It is for the first time that a 'tri-service formation' is taking part in the Republic Day Parade.

It will be followed by the 'Vic' formation of Chinook helicopters, used for airlifting diverse loads to remote locations.

The parade will culminate with a fleet of Sukhoi-30 MKI jets splitting the sky with a breathtaking 'Vertical Charlie' aerobatic manoeuvre.

Don't Forget Gandhi's Gift Of Ahimsa When Fighting For A Cause: President Kovind On R-Day Eve