Rajnath Singh said the Indian Army has inflicted heavy costs including casualties on the Chinese side during the clash with the PLA at the Galwan valley on June 15. 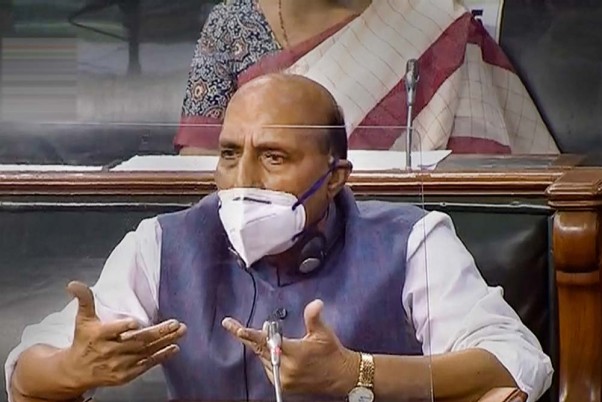 Defence Minister Rajnath Singh on Tuesday said that India and China border issue remains unresolved and that  there has been no mutually acceptable solution and that China doesn't recognise the traditional and customary alignment of the boundary.

The Defence Minister told the Lok Sabha that China maintains that the boundary between the two countries has not been formally delimited.

"The two sides have different interpretations of the position of the traditional customary line. The two countries had engaged in discussions during 1950s-60s but these efforts could not yield a mutually acceptable solution. We consider that this alignment is based on well established geographical principals," Defence Minister Rajnath Singh said.

Singh said even as this situation was being addressed by the ground commanders as per the provisions of the bilateral agreements and protocol, in mid-May the Chinese side made several attempts to transgress the LAC in other parts of the Western Sector.

"Violent conduct of Chinese troops is a violation of all past agreements. Our troops have done counter deployments in the area to safeguard our borders: Defence Minister Rajnath Singh on India-China border issue," Singh said.

He said peace and tranquility along the LAC have an impact on India-China bilateral relations.

The statement assumes significance in the backdrop of demands made by the Opposition for a debate on the issue.

Singh said in early May, the Chinese side had taken action to hinder the normal, traditional patrolling pattern of Indian troops in the Galwan Valley area, which resulted in a face-off.

He said the Indian Army has inflicted heavy costs including casualties on the Chinese side during the clash with the PLA at the Galwan valley on June 15.

In the Lok Sabha during the ongoing Monsoon Session, Singh said that India has conveyed to China that attempt to forcibly alter Sino-Indian boundary is not at all acceptable.

The Defence Minister called for a resolution that "we stand shoulder to shoulder with our armed forces who are guarding our borders to safeguard India's sovereignty and integrity."

"We are facing a challenge in Ladakh and  I urge the House to pass a resolution in support of our Armed Forces who have been defending our motherland at great heights and most inclement weather conditions in Ladakh for our safety and security. This is a time when this august House has to come together and reiterate confidence and faith in the velour of the brave armed forces and support them in the mission that they have undertaken to protect the territorial integrity of our motherland," Singh said.

He said the Indian forces are determined to protect security and sovereignty of the country. He, however, added that India is committed to peacefully resolve border stand-off with China.