'Illegal and evil manoeuvres take place in the secrecy of midnight. Such was the shame that they had to do the swearing-in hiding,' tweeted senior Congress leader Ahmed Patel. 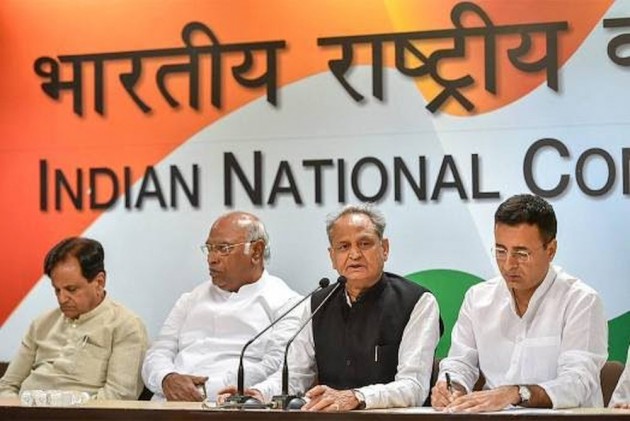 The Congress on Saturday slammed the BJP for secretly dealing with Ajit Pawar, nephew of NCP chief Sharad Pawar, to form the government in Maharashtra, and said the "illegitimate formation will self destruct".

Senior Congress leader Ahmed Patel, who is considered a close confidante of party interim chief Sonia Gandhi, in a tweet said: "Illegal and evil manoeuvres take place in the secrecy of midnight. Such was the shame that they had to do the swearing-in hiding. This illegitimate formation will self destruct."

Patel was given the task to hold talks with the Nationalist Congress Party (NCP) and discuss the common minimum programme before forging an alliance with the Shiv Sena, which has always followed strong Hindutva ideology.

Patel even went to Mumbai on November 12 to hold talks with the NCP leaders and then participated in the marathon meetings with Sharad Pawar along with his trusted aides.

Congress spokesperson Randeep Singh Surjewala also slammed the BJP over Devendra Fadnavis and Ajit Pawar being sworn in as the Chief Minister and Deputy Chief Minister, respectively, of Maharashtra, and said it is betrayal of the mandate and democracy.

In a series of tweets, Surjewala said: "Do not look at me like this in the light, I am politics, I don't wear clothes. This is called: Betrayal of mandate and democracy."

Slamming Fadnavis for dimissing media reports that it will not take support of the NCP to form a government in the state as it has exposed their corruption, Surjewala said: "The hunger for power cleans all the clots of corruption and principles."

In a master stroke, Fadnavis and Ajit Pawar took oath as the Chief Minister and Deputy Chief Minister, leaving the Congress, NCP and the Shiv Sena surprised as the leaders of the three parties were supposed to hold the final round of meetings to finalise their deal for Maharashtra, where President's rule was imposed since November 12.

In the October 21 assembly polls for the 288 seats, the BJP had won 105 while its pre-poll ally Shiv Sena had won 56. The Congress and the NCP had won 44 and 54 seats, respectively.