The students have been agitating for over three weeks demanding rollback of the hike in hostel fees. 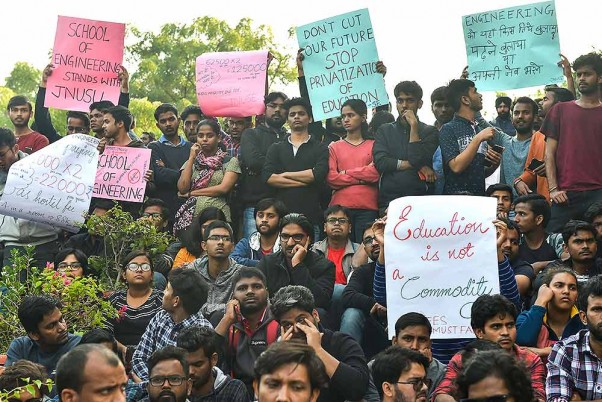 The HRD Ministry constituted high-power committee will visit the JNU campus on Friday to meet students and find a solution to current issues including a massive fee hike, officials said amid tensions after police cracked down on a protest by the students.

Earlier on Wednesday, the JNU Students' Union office bearers met the committee members at Shastri Bhawan in New Delhi. The students have been agitating for over three weeks demanding rollback of the hike in hostel fees.

"The high-power committee of the HRD Ministry met the JNU students on Wednesday and took stock of views of students in a cordial meeting at Shastri Bhawan. They agreed to meet the students again on Friday at the JNU campus to find solutions to the current issue," a senior HRD Ministry official said.

"The committee also appealed to the students to restore normalcy on the campus immediately for which the students responded positively," the official added.

The meeting commenced around 10.30 am and the students' union office-bearers attended it along with the student councillors from different schools.

The  JNU Students Union (JNUSU) put forth the demand for a complete rollback of the hostel fee hike and demanded that till the time the high-power committee submits its report, the fee hike must be put in abeyance.

"We demanded that the inter hall administration committee meeting that was held on October 28 without the students' union be reconvened and the hostel manual be passed only after suggestions from us are taken," JNUSU secretary Satish Chandra Yadav said.

"We also put forth the point about the vice-chancellor not meeting us which has brought the situation to this level," he added.

The HRD committee will also be meeting hostel presidents of the varsity.

The HRD Ministry had on Monday constituted a three-member committee to recommend ways to restore normal functioning of the JNU.

The JNU students have been protesting for over three weeks against a draft hostel manual, which has provisions for the hostel fee hike, dress code and curfew timings.

The varsity's Executive Council (EC) had later announced a partial rollback in the fee only for students from the BPL category and without any scholarships but the students had dubbed it as an "eyewash". The EC had also removed provisions for curfew timings and dress code.

Earlier, Union minister Ramesh Pokhriyal 'Nishank' had remained stuck inside the convocation venue for over six hours following the protest by the JNU students on the varsity's convocation day.