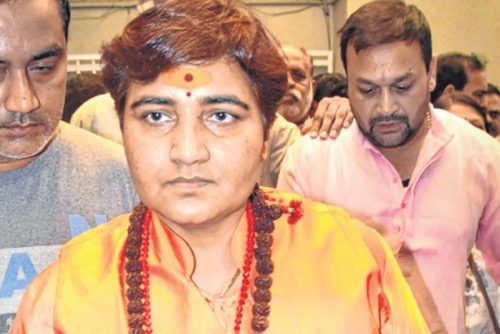 The recent statement by Pragya Thakur describing  Nathuram Godse as a ‘deshbhakt’ (patriot)  and the subsequent efforts by Prime Minister Narendra Modi to describe it as unforgivable indicates that India is not just in the cusp of a fierce ideological power struggle between Nehruvian secularism and Hindutva that has gathered political steam since the late 1980s with the Bharatiya Janata Party (BJP)’s electoral rise; there is also an underlying struggle  between various shades of Hindutva within its umbrella structure which unmistakably  nurtures deep  hatred for Mahatma Gandhi.

The messages by other BJ P leaders such as Anant Kumar Hegde, Nalini Kumar Kateel, Anil Saumitra (now suspended) represents perhaps the tip of the iceberg of a larger Hindutva strand.

Given that Gandhiji is revered as India’s Father of the Nation, and was assassinated -- the national and global reaction against the statement of Pragya Thakur, the BJP’s candidate from Bhopal, has fallen short of expectations. The resistance should have been far more loud, widespread, and organized, albeit in a democratic, civilized and non-violent manner so that it could have served as a deterrence in future. The near silence on this issue by Gandhians --particularly people like Anna Hazare -- is deeply unfortunate. Furthermore, it is crucial to make an effort to understand both the attempt to condemn Gandhi and glorification of Godse in India today in order to make sense of the changing terrain of political ideology and political values in our country.

The apologists of Gandhiji’s killers broadly offer three reasons to justify his assassination, which is consistent with what Godse argued: First and foremost they paint him as someone who was practicing appeasement of Muslims, an argument that remains the running theme of the Hindu Right even today; Secondly, they accuse him of having divided India by supporting the idea of Pakistan. It is worth recalling that Nathuram Godse closed his arguments about why he killed Gandhi during the trial reciting verses of the Bhagwad Gita- and the slogan: ‘Akhand Bharat Amar Rahe – Vande Mataram’. According to Justice GD Khosla’s memoir (one of three judges who ordered his execution), on the morning of November 18, 1949, when Nathuram Godse and Narayan Apte were taken to the gallows from the Central Jail, Ambala, Nathuram Godse was shouting every few seconds – “Akhand Bharat”- followed by Apte shouting “Amar Rahe”.

And, the third reason was the more immediate cause at the time -- which was Gandhi’s decision to force the government of India to release Rs 55 crore due to Pakistan despite Pakistan’s invasion of Kashmir.  Between 1934 and the day Gandhiji was assassinated, there were five attempts on his life: July 1934, September 1944, September 1946, and 20th January 1948 and the last was the successful one on 30th January 1948. Nathuram Godse was involved in the last two in the month of January in 1948. The three reasons that were attributed by apologists of Gandhi’s killer cannot justify the three unsuccessful attempts in 1934, 1944 and 1946 because the reasons of Partition and release of Rs 55 crore to Pakistan were not there. This suggests that Gandhi was seen as a threat by these fanatics, and not merely because of the Partition or Pakistan, and there is more to the narrative of hatred against Gandhiji by the Hindu Right, which perhaps serves as a background of the Hindu Right movement’s fueling the present types of reaction.

Gandhi has been seen as a contentious figure in modern times, and is criticized by scholars of varied ideology of both the Right and the Left. While it is one thing to critically evaluate his life and contributions, it is another to hail his killer a patriot. The latter could be mainly owing to an ideological conviction. There is too much of over–generalization and some of which has contributed to the growing hatred for Gandhi – and hero worship of Nathuram Godse.  A large part of the ideological offensive is indeed a consequence of the growing ignorance and desire to attack him without making much effort to make of sense of Gandhi’s life - in the context of his time and politics, which is why sweeping generalizations about him as racist or pro- Muslim or anti-Indian unity appears so strongly and frequently in these days.

To illustrate this further, I would like to share an interesting exchange I had with Arundhati Roy when she came to my University to give a lecture at the time of the publication of her book, The Doctor and the Saint, in 2014. Based on her research, she sought to present a portrait of Gandhi that the general audience was not familiar with -- and it sounded to me an attempt to trivialize Gandhi. One of the questions I asked Arundhati Roy was: What would have been the fate of the anti-colonial struggle without Gandhi?  She recognized that Gandhi played a stellar role in defining and leading the global anti-colonial movement.

Those who consider Nathuram Godse a deshbhakt/patriot obviously do not have any understanding of the organic relationship between anti-colonialism and patriotism or nationalism. National Conference leader Omar Abdullah makes sense when he asks if Godse was a patriot, then what was Gandhi? Anti-colonialism is the most crucial component of the idea of nationalism and patriotism among colonized societies in the broader understanding of these categories. Gandhi was the most accomplished and suave strategist against British colonialism in the 20th century. He not only pulled down the imperial colonial regimes, but made the idea of colonialism totally illegitimate for humanity. This has allowed the seeds of nationalism and patriotism to find fertile soil in human imagination. That in itself is the most valuable of evidence of his nationalism and patriotism, and Nathuram Godse as his killer cannot represent those values. By killing Gandhi he clearly cannot claim those titles -- and the fact that Pragya Thakur cannot make sense of these political and intellectual context reflects   how shallow is her knowledge of Gandhi and history. That is why we need to have a far more intense reading of history. Or else, there will be factual misrepresentations that would lead to the spreading of the legitimacy of various troubling, self-destructive forms of Hindutva, and produce its new heroes, who would transform our heroes into their villains, and end up  authoring new history.