Home  »  Website  »  National  »  From Dharmendra, Diljit To Priyanka, Celebrities Who Stood Up For Farmers' 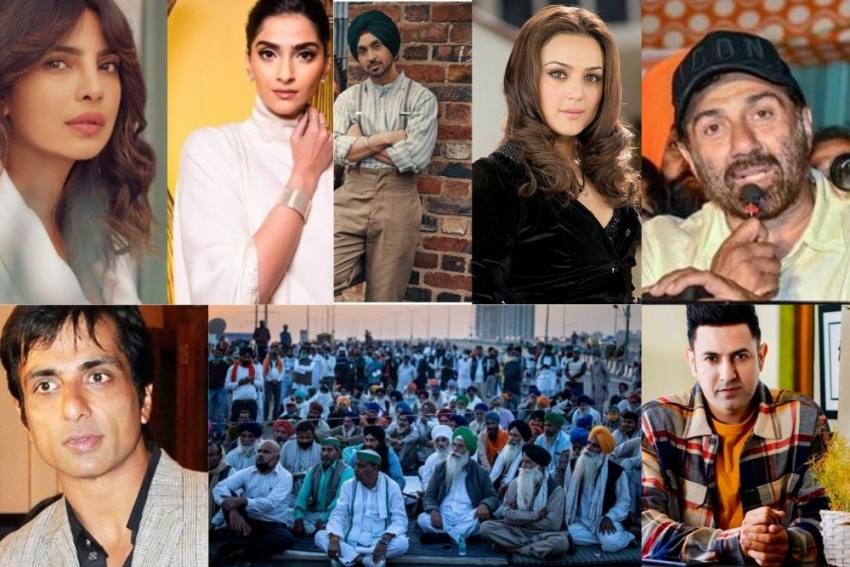 Celebrities who extended their support to the protesting farmers
AP/PTI
Arshi Khanam 2020-12-11T16:13:39+05:30 From Dharmendra, Diljit To Priyanka, Celebrities Who Stood Up For Farmers' 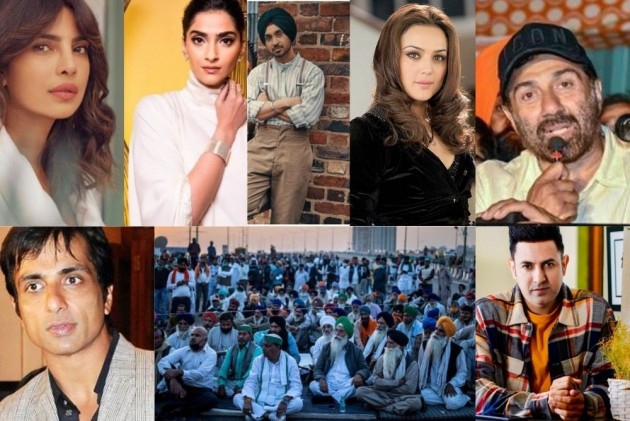 Farmers’ protest in India gained widespread support not only from organizations and Opposition leaders but also from artistes and sports personalities.

From international celebrity Priyanka Chopra Jonas to veteran actor Dharmendra, these stars are urging government to take quick action to resolve the farmers’ agitation.
While some joined the farmers at the protesting site, others use their social media accounts to extend their support. They even used various hashtags like #Jaikisan #Delhi chalo #Farmers Protest #StandWithFarmers #Tractor2Twitter

Here are some celebrities who have taken their stand on social media to raise their concerns for the Indian farmers – The people who are backbone for agriculture.

Diljit Dosanjh: Diljit Dosanjh is amongst the impactful celebrities whose tweets and support to the farmers’ protest was lauded. Recently, he indulged in a square off with Kangana Ranaut after she mistook an old Sikh lady protestor for Shaheen Bagh’s Bilkis Bano. The verbal spat between the two celebrities witnessed different reactions everywhere. Diljit also appeared and spoke for the farmers’ at the protesting site. Here are some glimpses of his famous tweets.

Sonu Sood: Actor Sonu Sood who won millions of hearts for his kind gesture over the past few months, have yet again win us over with his heartmelting post for farmers. His post in hindi read, "We exists because of farmers".

Priyanka Chopra: Bollywood and Hollywood megastar Priyanka Chopra Jonas spoke out on Sunday to extend her support to the agitated farmers’. She retweeted Diljit’s Tweet and urged the Indian government to take stringent action in support of India’s food soldiers.

Our farmers are India’s Food Soldiers. Their fears need to be allayed. Their hopes need to be met. As a thriving democracy, we must ensure that this crises is resolved sooner than later. https://t.co/PDOD0AIeFv

Dharmendra: Veteran Actor Dharmendra tweeted on Friday and expressed his grief for Farmers. His tweet read, “I am extremely in pain to see the suffering of my farmer brothers . Government should do something fast”

I am extremely in pain to see the suffering of my farmer brothers . Government should do something fast . pic.twitter.com/WtaxdTZRg7

Of course the #FarmerProtest is political! How else, does a section of aggrieved people put their point across in a democracy ? Protests against any legislation, are inherently political.
Don't they deserve a hearing from the political leadership of the country?

Preity Zinta: Actress Preity who lives with her husband Gene in Los Angeles also came out to support farmers and expressed hope that the ongoing talks will yield a solution to all the worries of the ‘soldiers of soil’ who are protesting amid the cold.

My heart goes out 2the farmers & their families protesting in the cold in this pandemic.They are the soldiers of the soil that keep our country going.I sincerely hope the talks between the farmers & govt yield positive results soon & all is resolved. #Farmerprotests #Rabrakha ðÂÂÂÂÂÂÂÂÂÂÂÂÂÂÂÂÂÂÂÂÂÂÂÂÂÂÂÂÂÂÂÂÂ pic.twitter.com/b7eW8p8N3P

Sonam Kapoor: Actress Sonam Kapoor shared some pictures on social media along with a quote, which read, “When tillage begins, other arts follow. The farmers, therefore, are the founders of human civilization”

Richa Chadha: Richa Chadha wrote, “Next time you shop for vegetables, (which u will soon irrespective of where u live or how much meat/fish u eat), don’t wonder why the prices for vegetables are constantly rising. India is still an agrarian economy. It’s not just a ‘farmer’s issue’. Everything is connected.”

Next time you shop for vegetables, (which u will soon irrespective of where u live or how much meat/fish u eat), don’t wonder why the prices for vegetables are constantly rising. India is still an agrarian economy. It’s not just a ‘farmer’s issue’. Everything is connected. https://t.co/8CAF9xcsIs

Sunny Deol: The actor-turned-politician Sunny Deol said he is supporting both the government and the farmers, claiming that the new laws are for the benefit of farmers and the third parties should not intervene.

Gippy Grewal: Punjabi Artist Gippy Grewal had expressed disappointment over the silence of Bollywood. He took to Twitter and wrote that for years Punjab has welcomed Bollywood with open arms but its silence over the issue was painful.

Dear Bollywood,
Every now and then your movies have been shot in Punjab & everytime you have been welcomed with open heart. But today when Punjab needs u the most, u didn't show up and speak a word. #DISAPPOINTED #8_à¤¦à¤¿à¤¸à¤à¤¬à¤°_à¤­à¤¾à¤°à¤¤_à¤¬à¤¨à¥à¤¦#TakeBackFarmLaws#FarmersAreLifeline

Few others like Riteish Deshmukh, Swara Bhaskar, Taapsee Pannu, Ammy Virk have penned their thoughts to join farmers, but virtually. Check out their tweets here:

If you eat today, thank a farmer.

I stand in solidarity with every farmer in our country. #JaiKisaan

Sir , just because the ones u expected to speak up did not please don’t put us all under the same umbrella.
Not that the handful of us need validation regarding standing up but it really pulls down our efforts when disregarded. ðð¼

What is this?????? What kind of cruelty are we unleashing on the people who grow our food?!?! Horrendous!!!! #FarmersProtest https://t.co/7UV8TA0m0s

Meanwhile, Former Sports Awardees, including Olympic winning personalities have threatened government to return their awards if no action is taken.