Sources say within two weeks the mainstream parties in J&K are likely to get an invite from the central government for having talks about the future course to be adopted in Jammu and Kashmir. 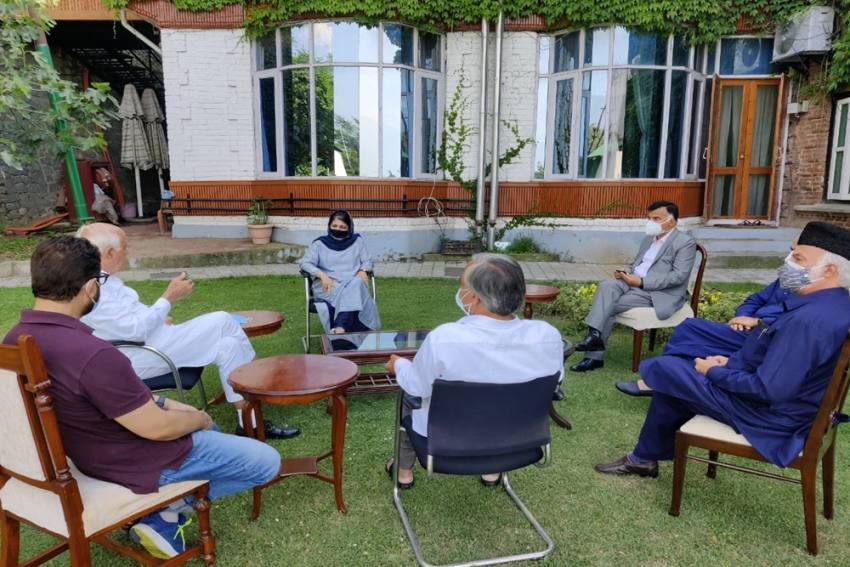 The talks would be surrounding the restoration of statehood to Jammu and Kashmir and the current delimitation process.
File photo
Naseer Ganai 2021-06-11T15:46:41+05:30 Farooq Abdullah Led PAGD Is Back From Dead, Why? 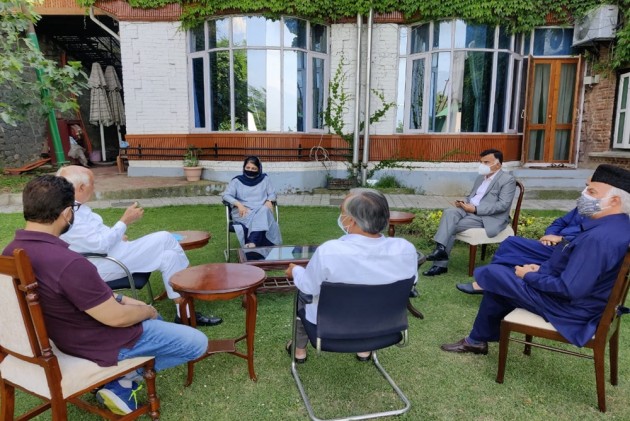 The surprise meeting after six months on June 9 among the signatories of Peoples Alliance for Gupkar Declaration (PAGD) held at the former chief minister and People’s Democratic Party (PDP) president, Mehbooba Mufti’s Gupkar residence has brought mainstream parties, especially, the PAGD back into focus in Jammu and Kashmir.

Sources say within two weeks the mainstream parties in J&K are likely to get an invite from the central government for having talks about the future course to be adopted in Jammu and Kashmir. The talks would be surrounding -- the restoration of statehood to Jammu and Kashmir and the current delimitation process. “The meeting is long due and it is expected to take place anytime soon,” says a political leader while pleading anonymity.

However, the PAGD is playing cautiously. “We have already stated we are not averse to talks. We are for talks. But as of now, we have no credible information about anything,” the PAGD spokesman and CPIM leader Mohammad Yousuf Taragami told Outlook.

The June 9 meeting was unscheduled and without any agenda. “But nothing happens in a vacuum in Jammu and Kashmir. I believe a political process is about to start and initiative might be taken by the Central government,” says a political leader pleading anonymity.

After the June 9 meeting, the Peoples’ Alliance for Gupkar Declaration chairman Dr Farooq Abdullah insisted that they have not closed doors for negotiation and when called for the dialogue, they will see that every time what could be done.

A day later, on August 5, 2019, the BJP government revoked Article 370 amid arrests of around 8000 people including three former chief ministers, and enforcing security and communication lockdown.

Last year on August 22 despite the crackdown, the signatories of the resolution issued a joint statement describing the abrogation of Article 370 as a challenge to the basic identity of the people of J&K.

Last year after the government announced the elections for district development council polls, the alliance fought the DDC polls jointly on individual party symbols. In the polls held in November-December last year, the PAGD won an impressive 110 seats of the total 280 constituencies. The BJP was expecting to sweep the polls but couldn't move beyond the Jammu, Kathua, Udampure, and Samba districts.  However, after the resounding success in the polls, the PAGD didn’t hold a single meeting and it was considered dead after Peoples Conference left it.

With the PAGD back in the news at the local level, the BJP seems unnerved with the developments. BJP’s Kashmir unit in a statement here said the Central government’s every decision or step will be right for the people of Kashmir. However, at the same time, BJP said that PAGD has no contribution in mitigating people’s suffering during Covid. “There is zero contribution of PAGD during Covid19 but we are not surprised. We have repeatedly asserted it as an alliance of opportunist leaders and the same is palpable by their conduct,” says BJP general secretary Vibodh Gupta in a statement.

Neanderthal, Extinct 40,000 Years Ago, Have No Role In Covid Severity In South Asia: Indian Scientists