On the video, the students could be seen taking a walk from the hostel to the hospital and then finally entering the complex where they have their classroom. 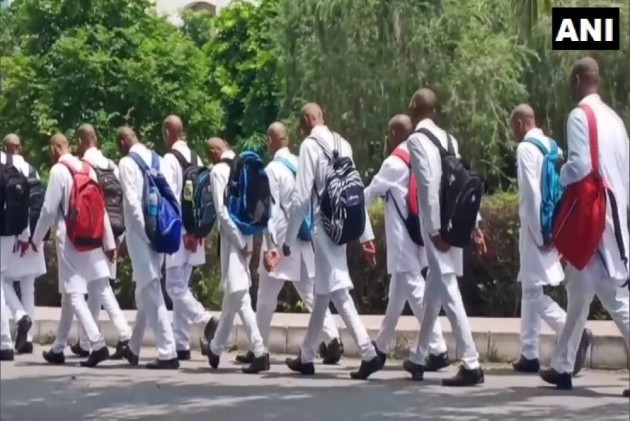 A group of 150 first-year students, with their heads shaved, hands behind the back and eyes on the ground, were seen parading across the Saifai Medical University campus recently in what was believed to be a case of "mass ragging"  in Uttar Pradesh's Etawah district.

The incident came to light after a video of the same surfaced on social media. On the video, the students could be seen walking in a straight line from the hostel to the hospital and then finally entering the complex where they have their classroom.

Massa Singh, Deputy Superintendent of Police, Safai, told Outlook that the police had visited the college at least twice over the past two days.

"None of the students approached the police, but we went to the college to take cognizance of the matter after the video of students surfaced," Singh said, adding he was accompanied station officer and Sub Divisional Magistrate on his visit.

When the police questioned the students if it was a case of "ragging" and if they were "forced" by anyone to shave their heads, Singh said, no student referred to the incident in those terms.

Singh added the police even had a word with the parents of one of the students and they too denied that their son had been forced to go bald.

"We have left our contact numbers with students and asked them to contact us whenever they feel the need for it," Singh said.

The Vice-Chancellor of the university, Dr Raj Kumar, had initially said that he was unaware of any such incident on campus but would look into the incident.

However, on Wednesday, Dr Kumar said a preliminary-enquiry report states the students have denied any ragging incident involving them.

"The report states that the information regarding the ragging incident is baseless. It has signatures of all the students," ANI quoted Dr Kumar as saying.