Home  »  Website  »  National  »  Duty Of Every Person Who Eats Food Grown By Farmers To Support Them: Hooda

Duty Of Every Person Who Eats Food Grown By Farmers To Support Them: Hooda

Opposition leaders lauded the farmers 'for staging a democratic, peaceful and disciplined demonstration' for more than a month on Delhi's borders 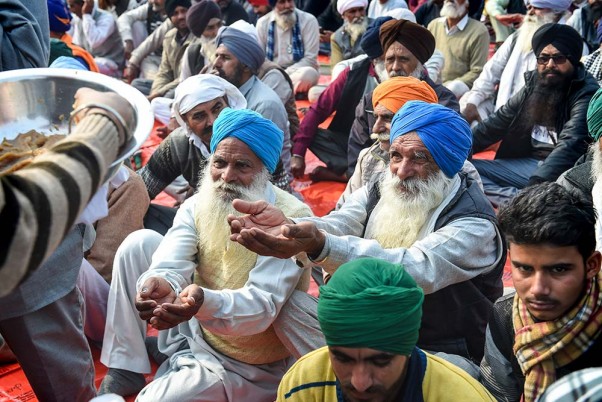 Farmers during their ongoing agitation over new farm laws, at Ghazipur border in New Delhi.
PTI photo
PTI 2020-12-28T22:23:28+05:30 Duty Of Every Person Who Eats Food Grown By Farmers To Support Them: Hooda

Former Haryana chief minister Bhupinder Singh Hooda visited the protesting farmers camping near Makrauli Kalan toll plaza to extend his support to their demand of repealing the farm laws and said it is "duty of every person who eats food grown by farmers to support them".

The Leader of Opposition in the state lauded the farmers "for staging a democratic, peaceful and disciplined demonstration" for more than a month on the borders of the national capital.

Addressing the farmers, Hooda said the their demands are "completely justified and they are fighting for their rights".

"I have been with the farmers since the very first day when they started protesting soon after the farm related ordinances were promulgated before being introduced as bills and later passed by Parliament."

Thousands of farmers have been protesting at various border points of Delhi for around a month as the stalemate between the government and the protesters, who are demanding a repeal of the three new agri laws, continued without any signs of a breakthrough.

"I have never seen such a disciplined movement in my life. For this, I salute the passion and commitment of every farmer. I demand that the government abandon its adamant attitude and accept the demands of the farmers," Hooda said.

Claiming that not only the farmers, but every consumer will be impacted by the three agricultural laws, he warned, "Labourers and people of economically weaker sections will stop getting subsidised food grains over a period of time."

Prices of pulses, vegetables and grains will rise "as the limits on hoarding stocks are being removed which the common consumer will have to ultimately pay", the Congress leader said and demanded that the government should repeal the three laws "which adversely affect every citizen".