The dossier also notes that the flag of Mufti's party, PDP, has 'radical origin' owing to its green colour. 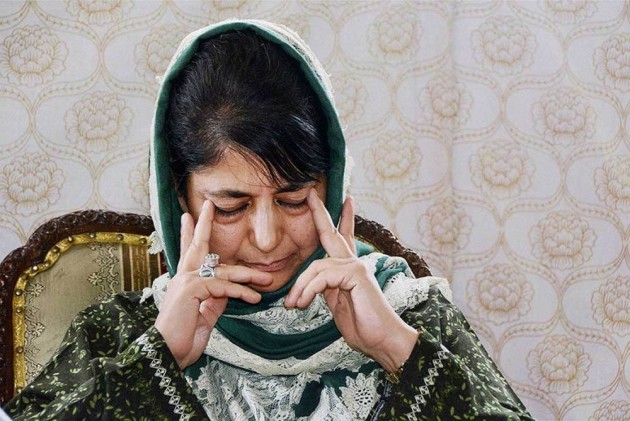 Former Jammu and Kashmir Chief Minister Mehbooba Mufti has been accused of "glorifying militants" and being "divisive" in the government dossier supporting her detention and booking under the stringent Public Safety Act (PSA).

“Her divisive approach and potential and its spillover to other parts of the country are reflecting in her pronouncement," it said.

Criticising the charges, the official twitter handle of Mufti, currently operated by her daughter Iltija, said: "Ms Mufti joined politics when most assumed Mufti sahab had faded into political oblivion. Both worked hard to make PDP a regional force. In a country where Shravan’s obedience to his parents is folklore, disgusting to see GOI turn ‘daddy’s girl’ into a slur & a criminal offence."

The 60-year-old former chief minister has been in preventive custody since August 5, when the central government revoked the special status of Jammu and Kashmir granted under Article 370 of the Constitution.

The government dossier details Mufti's political career in a positive manner in the beginning, saying it started in 1996, and “reached its zenith, when on April 4, 2016, she became the first woman chief minister erstwhile state of J&K.” The narrative begins with her childhood and goes on to talk about her marriage, divorce and her two daughters along with her joining politics in the Kashmir region.

“The subject (Mehbooba) started her political journey in 1996 when she contested assembly from Bijbehara, Anantnag. On parting ways with Congress party by her father and formation of Peoples Democratic Party (PDP), the subject got appointed as vice president of the said party. The subject’s mother and brother also tried their luck with politics but were more or less non-starters in the field of politics.”

“In 2002 the subject contested elections for Legislative Assembly from Pahalgam and was successful in making her way to legislative Assembly. In 2004, she won parliamentary elections from Anantnag. Her political career reached its zenith when on 4th April 2016, she became the first woman chief minister of erstwhile state of J&K.”

However, in the next paragraph, the dossier, reads, “the subject is recognized as a hard-headed and scheming person whose actions have been ranging from speeches glorifying militants to creating fears among majority population based on cheap politics among the masses.” It adds that the genesis and approach of the People’s Democratic Party have been of a dubious nature.

Incidentally, the BJP forged an alliance with the PDP in 2015 and the coalition government lasted till June 2018.

The dossier says the symbol of the PDP was taken from the election symbol of Muslim United Front (MUF) and the green colour of the party flag reflects the radical origin of the same.

Then the dossier talks about her tweets and says, “the mindset of the subject can be figured from tweets which she has been making in social networking sites showing her instigating bent of mind.”

The dossier mentions Mufti's tweet of August 5, 2019, the minutes after she was taken into custody under section 107 of the CrPC as an example. The dossier claims that her tweet reads: "the abrogation of Article 370 hasn’t just made accession null and void and also reduces India to an occupation force in J&K.”

Her tweet about the Triple Talaq bill has also been cited in the dossier. It says that Mufti had tweeted: “Fail to understand the need to pass the triple talaq bill especially since the Supreme Court had already declared it illegal. Undue interference seemingly to punish Muslims. Given the current state of the economy, should this really have been a priority.”

The dossier asserts that the material evidence produced by the police substantiates the case that deliberate attempts were made by “the subject” to create an atmosphere of fear and chaos, so as to create mass agitation leading to “public order” (sic) including incitement to violence.

“The case has been examined under the provisions of Public Safety Act (PSA), judgements issued by the High Court about the various aspects of the detention under PSA and after due application of mind pursuant to perusal of material evidence, documents and reports submitted by the police, magistrate and other agencies, a strong case has been made for immediate measures under the J&K PSA for detention of the subject in order to avoid disturbances to public order in the region," it said.