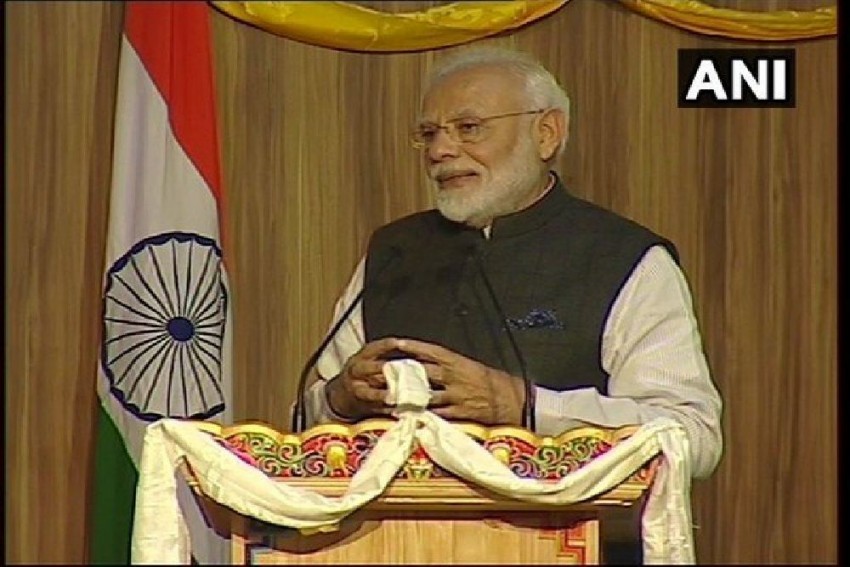 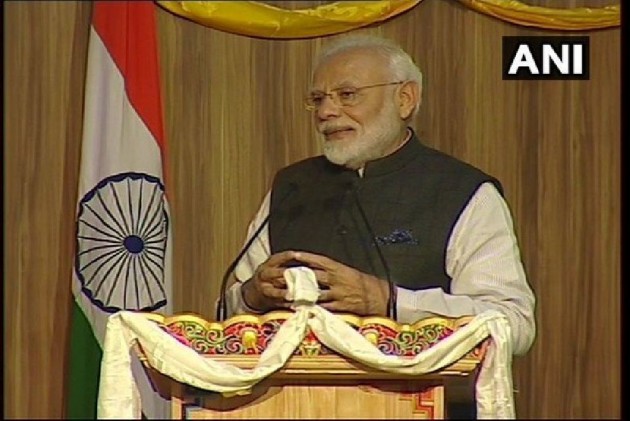 Prime Minister Narendra Modi on Sunday addressed students and parliamentarians at the Royal University of Bhutan. The prime minister, who is on a two-day visit to Bhutan to strengthen bilateral cooperation, spoke about the role of democracy and education in setting people free.

"Democracy and education, both aim to set us free, neither can be complete without the other and both help us reach our fullest potential and to be the best we can," he said.

"The world today offers more opportunities than ever before. You have the power and potential to do extraordinary things, which will impact generations to come. Find your real calling and pursue it with full passion," Modi said.

He also urged the students to look for innovative solutions to challenges.

"Yes, we have challenges. But for every challenge, we have young minds to find innovative solutions to overcome them. Let no limitation constrain you. I want to tell you all - there is no better time to be young than now," he added.

Both countries have shared cooperation in traditional areas such as hydropower. However, on the first of day of PM Modi’s visit, New Delhi and Thimpu pledged their commitment to working on new sectors of bilateral ties such as health, space and education.

In view of the development, nine MoU’s were signed between the two nations, out of which seven were in the field of education. In a symbolic gesture, the documents were also exchanged between the Prime Ministers of the respective nations in front of the statue of Zhabdrung Ngawang Namgyel, which has been loaned by India to Bhutan.

India has also committed to giving Rs 5,000 crore to Bhutan as development assistance. The pledge was made in its 12th five-year plan, which began earlier this year. The first tranche of funds has already been sent by New Delhi.

In his address, Modii also hailed Bhutan’s message of “happiness” and added that the world could learn a lot from Bhutan.

“Bhutan's message to humanity is happiness. The happiness which springs from harmony. The world can do with a lot more happiness. Happiness, which shall prevail over mindless hate. If people are happy, there will be harmony. Where there is harmony, there will be peace. And you need peace that will help society... progress to sustainable development," he said.

The Prime Minister touched upon the shared history of India and Bhutan. "In the 20th century, many Indians came to Bhutan as teachers. Most Bhutanese students of older generations would have had at least one Indian teacher during their education. Some of them were honoured by His Majesty last year and we are grateful for this generous and kind gesture," he said.

There are currently 3,748 Bhutanese students studying in India.

"As Bhutan soars high in its endeavours, your 1.3 billion Indian friends will not just look on and cheer you with pride and happiness. They will partner with you, share with you and learn from you," he added.

Following the address, Modi paid a visit to the National Memorial Chorten, where he offered 'khaddar' and lit butter lamps.

The Royal University of Bhutan founded on June 2, 2003, by a royal decree, is the national university system of Bhutan. King Jigme Khesar Namgyel Wangchuck is the chancellor of the university.

All 47 MPs from Bhutan's lower house of the parliament (National Assembly of Bhutan) were invited for PM Modi’s address, along with the 25 MPs in the Bhutanese Parliament's upper house (National Council of Bhutan).

On the first day of his visit, PM Modi met with a host of dignitaries, including the King of the nation at Tashichhodzong and his Bhutanese counterpart, amongst others. He also met the former King of Bhutan, Jigme Singye Wangchuck.