Covid-19: Is There No Sense Of Humanity Left, Delhi HC Asks Centre Amid Oxygen Crisis 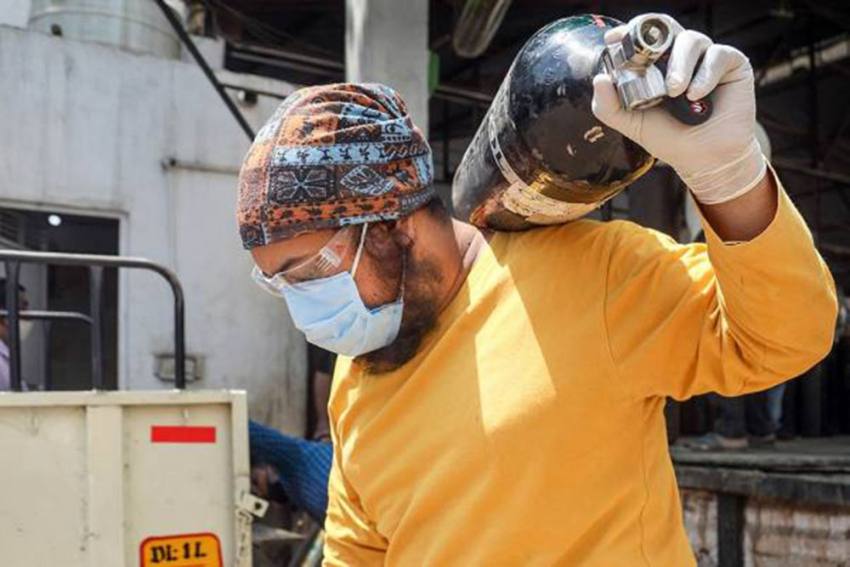 A relative of a COVID-19 patient carries empty oxygen cylinders for refilling, as coronavirus cases surge across the country, in New Delhi.
PTI
Outlook Web Bureau 2021-04-21T22:37:53+05:30 Covid-19: Is There No Sense Of Humanity Left, Delhi HC Asks Centre Amid Oxygen Crisis 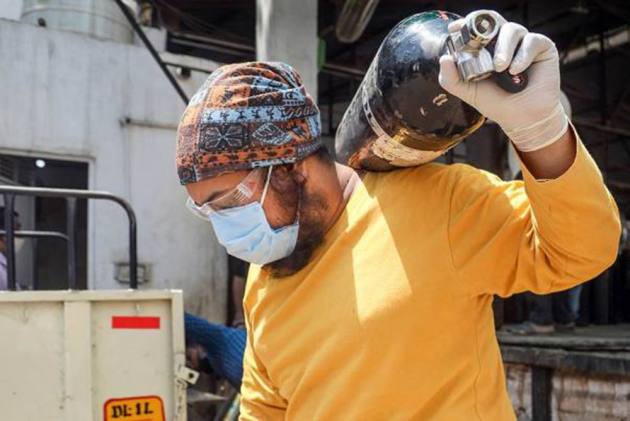 The developments come in the backdrop of the national capital logging a record 28,395 coronavirus cases and 277 deaths during the last 24 hours. Delhi’s Covid-19 positivity rate surged to 32.82 per cent on Tuesday-- meaning every third sample returned positive.

Slamming the Centre for lack of action, the Delhi HC said, "Why is the Centre not waking up to the gravity of the situation? We are shocked and dismayed hospitals are running out of oxygen but steel plants are running.”

The HC further said heavens are not going to fall if the industries, including steel and petroleum, run on lower capacity till oxygen is imported.

It said certainly all hell will break loose with the stoppage of medical oxygen for hospitals.

A bench of Justices Vipin Sanghi and Rekha Palli, which was conducting the hearing on a holiday, said the responsibility to ensure oxygen supply is squarely on Central government’s shoulders and if necessary, entire supply of oxygen to industries including steel and petroleum can be diverted for medical usage.

"The steel and petrochemical industries are oxygen guzzlers and diverting oxygen from there can meet hospitals' requirements," the bench said.

"If Tatas can divert oxygen they are generating for their steel plants to medical use, why can't others? This is the height of greed. Is there no sense of humanity left or not," the court observed.

It said the Centre shall consider ways and means for transporting oxygen to hospitals, either by creating dedicated corridor or airlift it from the place of production to the place of usage.

The court is conducting an urgent hearing on a plea filed by Balaji Medical and Research Centre, which owns and runs various hospitals in the name of Max, stating that if supply of oxygen is not replenished on an immediate basis, the lives of the patients who are critical and on oxygen support will be endangered.

The bench said, “we are constrained to direct the Centre to forthwith implement this order and take over supply of oxygen from steel plants and if necessary also from the petroleum plants, to supply it to hospitals.”

It said such industries will have to stop their productions till the situation in hospitals improves and asked directed them to increase their oxygen production generated by them and give it to Centre for supply in other states for medical use.

“Our concern is not just for Delhi, we want to know what the Central government is doing with regard to oxygen supply across India,” the bench said and added, “what is the central government doing. If this is the situation in Delhi, we are sure it is the same in other states.”