Home  »  Website  »  National  »  Congress' Fate In Manipur Followed A Similar Pattern: So Near Yet So Far

Congress' Fate In Manipur Followed A Similar Pattern: So Near Yet So Far

The unfolding political crisis in Manipur began on June 17 with nine MLAs of the ruling BJP-led coalition withdrawing their support to chief minister N. Biren Singh’s government, which gave the Congress some reason for cautious optimism. 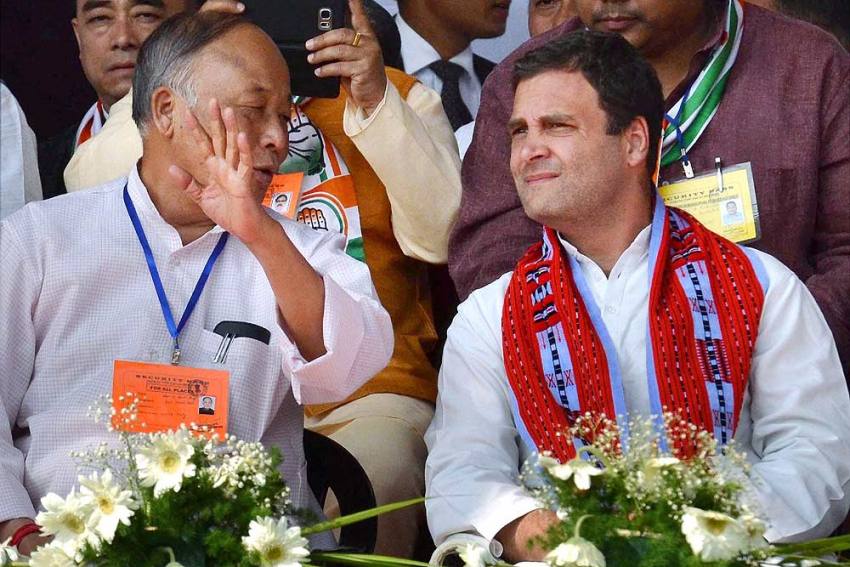 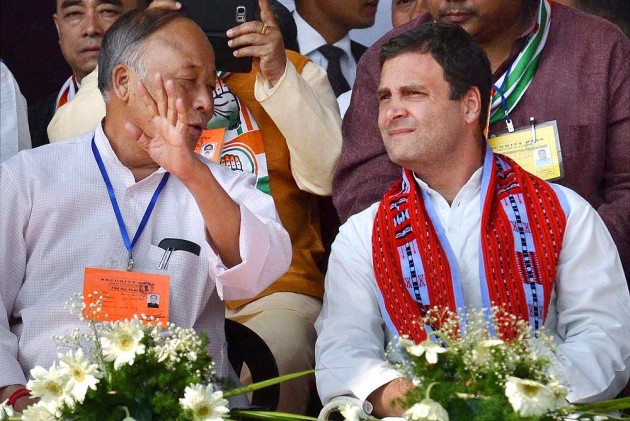 It is rare these days for the Congress party to win elections. Rarer still are the chances of the party getting an opportunity to wrest power from an incumbent BJP government. And so, the unfolding political crisis in Manipur, which began on June 17 with nine MLAs of the ruling BJP-led coalition withdrawing their support to chief minister N. Biren Singh’s government, gave the Congress some reason for cautious optimism.

As the Manipur plot unraveled, with fast-paced developments across three capitals – Imphal, Guwahati and Delhi, the Congress found itself in the similar set-up of being within reach of power only to have it slip away slowly.

The defections from the BJP camp on June 17, two days ahead of a crucial Rajya Sabha poll for one vacant berth from Manipur, had given the Congress hope of returning to power in the state and ensuring that its candidate, T. Mangi Babu, is elected to Parliament’s upper house. Within hours of the nine ruling coalition members – three from the BJP, four from the National People’s Party (including deputy chief minister Y. Joykumar Singh), a Trinamool Congress MLA and another independent – resigning, the Congress announced its own coalition – the Secular Progressive Front (SPF).

The key architects of the revolt against Biren Singh were NPP’s Joykumar Singh and BJP’s own Biswajit Singh. Besides being a leader of the NPP, Joykumar is also a former IPS officer who served as Manipur’s director general of police between 2007 and 2012 when Ibobi Singh was chief minister. Biswajit Singh was in race to be the state’s CM ahead of the 2017 assembly polls but found his ambitions scuttled when the BJP imported Biren Singh from the Congress and declared him as the favoured man for the job.

That Joykumar and Biswajit had a frosty working relationship with Biren right from the time the BJP government was sworn-in is common knowledge. Biswajit would often lead delegations of his loyalists in the BJP to meet the party high command in Delhi and seek Biren’s ouster; complaining that the chief minister’s autocratic functioning was causing heartburn within the allies of Manipur’s ruling coalition. Last year, when Biren couldn’t handle the frequent bickering by Joykumar and Biswajit, he stripped the two ministers of the charge of several key portfolios that were vested under their care. Many in the state’s political circles believe that Joykumar and Biswajit and planned to spearhead a rebellion against Biren then but a timely intervention by Himanta Biswa Sarma, the BJP’s key troubleshooter for northeastern states, brokered an uneasy truce.

The ceasefire between the warring satraps, however, ended in April, shortly after the Centre clamped the nationwide lockdown due to the coronavirus crisis. Biren divested Joykumar of all his portfolios once again and BJP leaders of close to the CM publicly dared the NPP leader to withdraw support from the government. Joykumar, say sources, waited for the “right time” and struck on June 17, not just resigning from the government but also ensuring that all four NPP leaders, three of Biren’s detractors from the BJP as well as the Trinamool Congress and independent MLAs followed suit.

Led by former chief minister Okram Ibobi Singh of the Congress, the SPF members called on Governor Najma Heptulla and staked claim, with support of at least 30 MLAs, to form a new government. The Governor received the representation but did nothing more.

And then began the blow back for Ibobi and the counter-punch by Biren, with huge doses of help from Sarma. The Congress was hoping that its new found allies from the NPP and Trinamool would ensure victory for its candidate, T. Mangi Babu, in the Rajya Sabha polls. However, in a surprise move that defies legal tenability and has now been challenged in the Manipur High Court, assembly speaker Khemchand Singh allowed three Congress MLAs who had previously resigned from the party to join the BJP and thus had disqualification proceedings pending against them under the anti-defection law to come to the assembly and vote in favour of the BJP candidate, Manipur’s titular king, L. Sanajaoba.

These three MLAs were among seven Congress legislators who had previously announced their resignation from the party to join the BJP. Under the anti-defection law, these legislators should have lost their Assembly membership after quitting the Congress but the matter went to the Manipur High Court. Weeks ahead of the RS poll, the high court ordered that the seven Congress rebels would not be allowed to set foot in the state assembly until the Speaker disposes off the anti-defection proceedings pending against them. Khemchand Singh finally decided that while the three Congress rebels who continued to side with the BJP would be allowed to vote in the RS polls, the other four who wished to return to the Congress stand disqualified.

Then came the second setback for Ibobi. Congress MLA RK Imo Singh decided to vote in favour of the BJP candidate and convinced party colleague Okram Henry to do the same. Imo Singh is Biren Singh’s son-in-law but had, so far, refused to part ways with the Congress to join his father in the BJP. Henry’s switch, perhaps, would have pinched the Congress even harder as he is a close relative of Ibobi Singh. The last minute defections allowed the BJP to win the Rajya Sabha seat and signal to Ibobi that the political game of thrones was no where near its end.

Ibobi, however, put up a brave face and continued to claim that the Congress-led SPF would form the government in the state and that his party would challenge the Speaker’s decision in court and demand cancellation of the RS poll.

And then entered the CBI; the premier investigation agency sent a team to Imphal to interrogate Ibobi Singh in connection with his alleged role in embezzlement of Rs 332 crores of government funds that were allocated to the Manipur Development Society when he was chief minister. The case had reportedly been referred to the CBI by the Biren Singh government last November but the agency had not questioned Ibobi on his alleged role until this week. The CBI’s sudden realization of their being prima facie evidence against the former CM of misappropriation of government funds just when he had staked claim to form a Congress-led government has raised obvious, but unsurprising, questions over the timing of the agency’s decision and whether this was the BJP’s way of intimidating the rebels to fall in line.

While Ibobi was busy trying to deal with the new challenge posed by the arrival of the CBI team, Sarma, along with Meghalaya chief minister and NPP president Conrad Sangma flew in to Imphal by a special flight on June 23, rounded up the four NPP legislators, including Joykumar, and flew back to Guwahati the same day. The following day, the MLAs were flown to Delhi where they met Union home minister Amit Shah and BJP president J.P. Nadda to share their grievances against Biren Singh.

Though there was no immediate clarity on what really transpired in the meeting of the rebels with Shah, it is learnt that the NPP legislators, Joykumar in particular, strongly pressed for the removal of Biren Singh as chief minister. Shah, sources said, was non-committal on the demand but assured the rebels that their problems had been taken note of and will be resolved.

Sources say the BJP has not entirely ruled out replacing Biren Singh with another party leader in order to save its government in Manipur. Congress sources, however, say irrespective of Biren Singh’s fate as CM “the BJP government will remain on shaky ground because its allies have realised that they can exert pressure on the top leadership”. There is also the issue of several assembly bypolls necessitated in the state following the Speaker’s decision to disqualify the four Congress MLAs and also the unresolved legal battle over the continuance of the three Congress rebels who were allowed to vote for the BJP in the RS polls.

For now though, it seems, Ibobi Singh and the Congress will have to draw solace from the fact that they were within reach of gaining power – just as they were after the 2017 assembly polls when with 28 MLAs the Congress had emerged as the single largest party in the Assembly. Back in March 2017, the BJP, with 22 MLAs, had outsmarted the Congress by hurriedly stitching up a post-poll alliance and, with a little help of Governor Najma Heptulla, formed a government. Today, the BJP seems to have ensured the longevity of its government; even if it requires sacrificing Biren Singh but the Congress may draw hope from the possibility of fresh strains in the ruling coalition in the not-so-distant future.

SSLC Exams Held In Karnataka Amid Covid-19 Fears And Precautions