In the presence of Home Minister Amit Shah, Bodo representatives, including the All Bodo Students Union, the factions of the NDFB, signed a tripartite agreement with representatives of the Government of India and the Assam government earlier this week. 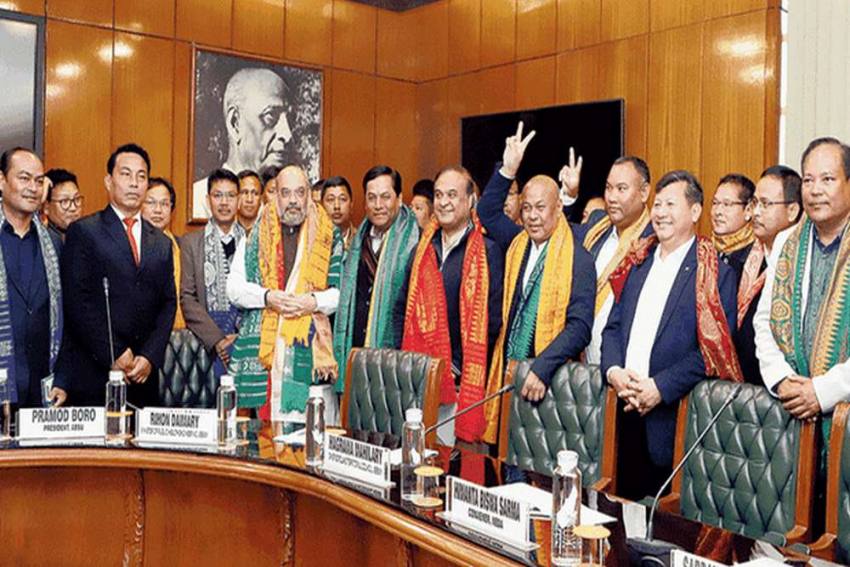 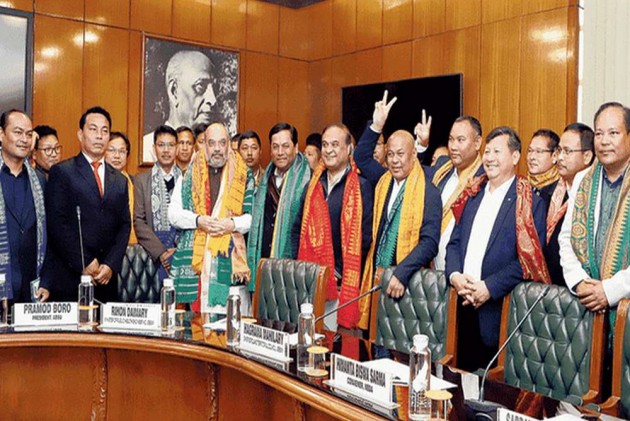 At the packed Gauhati Medical College and Hospital Auditorium, 1615 cadres of the three factions of the National Democratic Front of Bodoland, some of them involved in ghastly acts of violence ceremonially laid down arms on Thursday signalling an end -- for now -- to one of the bloodiest insurgencies in the country. However, the demand for a separate statehood may crop up again in the future, Bodo leaders say. The agreement, however, is likely to shore up BJP’s fortunes at least in Bodo districts even as it faces angry anti-Citizenship Amendment Act protestors in other parts of the Brahmaputra Valley.

Earlier this week, in the presence of Union Home Minister Amit Shah, Bodo representatives, including the All Bodo Students Union, the factions of the NDFB, including the one which came over ground this month from the jungles of Myanmar, signed a tripartite agreement with representatives of the Government of India and the Assam government.

Home Minister Shah hailed the agreement, the third with the Bodos as a permanent solution to a conflict, which has taken over 4,000 human lives. This is the third agreement since 1993.

Kumar Sanjay Krishna, the new Chief Secretary of Assam, who earlier helmed the important Home and Political Department, explained how all the groups, who were in conflict with the State are on board for the first time. He said the state government will ensure all-round development. “For the surrendered cadres, we will shortly come up with a comprehensive rehabilitation policy,” said Krishna, also a signatory to the pact.

Militant groups claim they are happy with the pact for now.

Gobinda Basumatary who heads the NDFB (Progressive), which has been in talks since 2005, said, “With this pact, the armed militancy in Bodoland will end. I don’t think there will be any more armed groups in Bodo community.”

“The provision that we have got is enough and so many other states don’t have these provisions. Even if we have not achieved statehood but whatever we have achieved in this pact, we are happy,” he said. “It promises direct funding. We are getting three central universities,” Basumatary told Outlook after the arms laying down ceremony.

The Memorandum of Settlement (MoS) renames the four contiguous districts of Kokrajhar, Chirang, Udalguri and Baksa from Bodo Territorial Area Districts to Bodo Territorial Region, promises reorganisation of areas under the council by way of a commission, would increase the powers of the BTC including increase in seats from 40 to 60 and also promises to look after the interests of the Bodos living outside the BTC area through a autonomous council.

The pact laid to rest the demand for a separate state, which is visible in graffitis on the walls and bridges through the length and breadth of the Bodo Territorial Council areas.

Promode Bodo, the President of the All Bodo Students Union, said the influential students body is happy with the MoS but claims that one will have to wait to see if it ends demands of a separate state.

“I am satisfied. It will depend on approach of the government and its sincerity in implementing the promises and clauses of accord,” he said adding the decision to discontinue the movement for a separate state will be only taken once the ABSU meets in a special session later next month.

Bodo referred to the history of the movement and said how the organisation was forced to restart the agitation in 1996 following the faliure of the 1993 pact. In 2010. the agitation once again began after the dissatisfaction over the 2003 pact.

The pact promises general amnesty to cadres involved in non-heinous crimes and consideration on the case to case basis for those who are involved in heinous offences.

Ranjan Daimary, the chief of one of the factions, for example, is serving a life term for masterminding the October 30 serial blasts said to be one of the worst terror strikes in the country.

Daimary, founder of the armed militant movement which first started in 1986 with the Bodo Security Force, went to St Antony’s College in Shillong and says he drew inspiration from Marxism. He is currently out on bail after the court ordered his release for the important pact.

Daimary was arrested in Bangladesh in April 2010 and subsequently handed over to India at a border immigration post in Meghalaya. He got bail the first time in 2013 and joined talks.

Some members of the NDFB(S), led by B Saoraigwra which came over ground only in January, are accused of multiple incidents of violence including the Adivasi massacre in December 2014.

“Some of the members of the outfit may have to fight it out legally,” said Basumatary. But Bodo is hopeful that the Government of India will consider giving maximum relaxation to even those involved in heinous crimes.

Moreover, even as the government takes a call on those involved in heinous crimes, it has been a uphill task to rehabilitate other cadres. The Assam government’s rehabilitation policy has been sloppy but the government claims its making attempts to revamp it.

“We are developing a new model of rehabilitation. We are going to engage with NDFB cadres. Our primary concern will be that these cadres, who have now surrendered, should not go back to any anti-social activity because of lack of opportunity. We have to include them into the mainstream and give them opportunities for livelihood, otherwise they can again become a threat to society,” senior minister Himanta Biswa Sarma said on Thursday.

The BJP, riding on its success inking the pact, hopes to make inroads in Bodo Territorial Region, where its mostly dependent on its alliance partner Bodoland People’s Front. On February 7, Prime Minister Narendra Modi will be visiting Kokrajhar, Sarma announced on Thursday requesting the gathering to accord him a grand reception.

“There are already so many BJP supporters in Bodo people. This agreement will give them a further upper hand, a chance to sneak more into the Bodo community,” Basumatary concedes.

Meanwhile, peace in Bodoland Territorial Region, which has witnessed several incidents of ghastly ethnic violence, will depend on the evolving relationship between the Bodos, the dominant but not the majority in the BTR and other communities.

Pallab Bhattacharyya, the former chief of Assam Police’s intelligence wing advises that one should learn from “historical mistakes.”

“We have to learn from earlier experiences. Meghalaya was also part of Assam. It got separated because of dominant community. In case of BTAD movement, same thing happened. We did not take Bodos in confidence during the Assam Agitation. The BTAD is conglomerate of many communities. They will have to take other communities into confidence if the region has to prosper,” Bhattacharyya said.