The combined voter turnout in the two phases was recorded at 53.79, the Election Commission said. 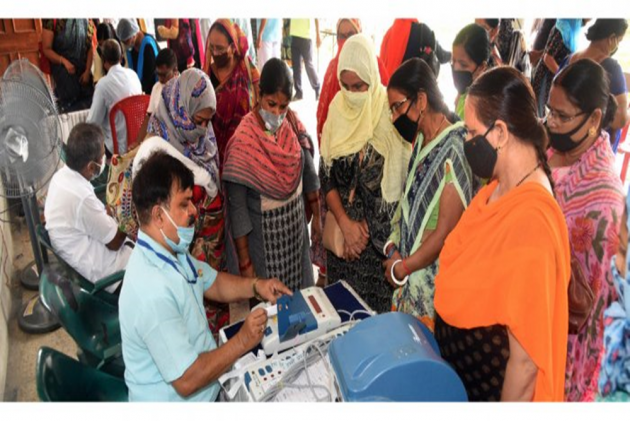 The 94 assembly constituencies that went to poll during the second phase of the Bihar elections on Tuesday recorded 54.53 per cent turnout, according to the Election Commission data.

The combined voter turnout in the two phases was recorded at 53.79 per cent till 5 PM, the Commission said. In the corresponding constituencies which went to poll in the 2015 assembly polls, the turnout was 55.35 per cent, the EC added.

Vaishali district's Raghopur, from where RJD leader Tejashwi Yadav is contesting the elections in the second phase, recorded 36.09 per cent votes during the first six hours, as per the EC data.

Hasanpur, from where Lalu Prasad's elder son Tej Pratap Yadav is in the fray, has recorded an estimated 38.83 per cent votes till 1 pm. Thirty one per cent voting was recorded in Parsa from where JDU's Chandrika Roy, the father of Tej Pratap's estranged wife Aishwarya, is contesting.

Kumar did not speak to the media waiting outside the polling station, while Tejashwi said after casting the ballot that people are "angry" with the government and they will vote for education, health, irrigation and law and order.

Polling began at 7 am, but the time for its conclusion has been extended by one hour till 6 pm to facilitate Covid-19 patients and those with symptoms of the disease to exercise their franchise during the final hour.

The process, however, will conclude early in Maoist-hit areas.

The Election Commission said voting ended at 4 pm in eight seats -- Gaura Bauram and Kusheshwar Asthan in Darbhanga district, Minapur, Paroo and Sahebganj in Muzaffarpur, Alauli and Beldour in Khagaria, and Raghopur in Vaishali.