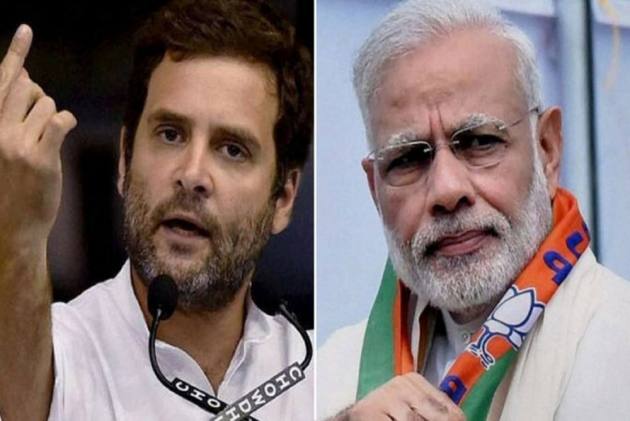 The political temperature in Bihar is set to go up substantially as Prime Minister Narendra Modi and Congress leader Rahul Gandhi will take a direct plunge in electioneering on Friday, as they are set to address a series of rallies in the state.

Prime Minister Narendra Modi will address three rallies on Friday at-- Dehri-on-Sone in Rohtas district, Gaya and Bhagalpur. According to BJP sources and reports from the districts, Bihar Chief Minister Nitish Kumar will join Modi at the rallies in Dehri and Bhagalpur. In Gaya, JD(U) leader in the Lok Sabha Rajiv Ranjan Singh Lallan will share the dais with Modi along with former chief minister and president of Hindustani Awam Morcha Jitan, Ram Manjhi.

Congress leader Rahul Gandhi is also slated to launch his election campaign in Bihar on Friday. He will address two rallies on Friday -- at Hisua in Nawada and Kahalgaon in Bhagalpur district. Sources close to the Congress and RJD have said that Tejashwi Yadav, the chief ministerial face of the Mahagathbandhan, will join Rahul Gandhi at Hisua, where the Congress nominee Neetu Singh is taking on sitting BJP MLA Anil Singh. In Kahalgaon, the former Congress president will be accompanied by Shaktisinh Gohil and other senior party leaders, besides some district-level office bearers and candidates of the Mahagathbandhan alliance.

In the opposition camp, RJD leader Tejashwi Yadav is holding the fort in the absence of his father Lalu Prasad. Tejashwi has been addressing 8-9 rallies every day.

The arrival of Modi and Rahul Gandhi on the campaign scene will heat up the poll temperature further. Since the Bihar elections are taking place amidst the Covid-19 pandemic, adequate preventive measures are being taken at rally venues. With videos on social media showing rampant violation of Covid-19 guidelines, with people not wearing face masks or observing social distancing at political rallies, officials and party sources have said that measures are being taken for safeguarding the attendees at the meetings of the two leaders.

A report from Gaya quoting organisers has claimed that a Special Protection Group (SPG) has taken charge of the Gandhi Maidan, the venue for Modi's rally. Chairs have been arranged for nearly 15,000 by heeding social distancing norms. Nobody will be allowed inside the rally ground without a face mask, sources said. While the PM and a handful of NDA leaders will be on the dais, a separate platform has been set up for the candidates, sources added.

With regards to Rahul Gandhi’s rally, senior party leader Sadanand Singh, whose son Shubhanand Mukesh is in the fray from Kahalgaon assembly seat in place of his father, told PTI, face masks and sanitisers would be distributed among people at the venue.