At Naveen Patnaik's Home, Amit Shah And Mamata Banerjee Have Lunch Together

Over the past year, Banerjee has been at loggerheads with the central government on various issues, latest being the contentious Citizenship Amendment Act (CAA). 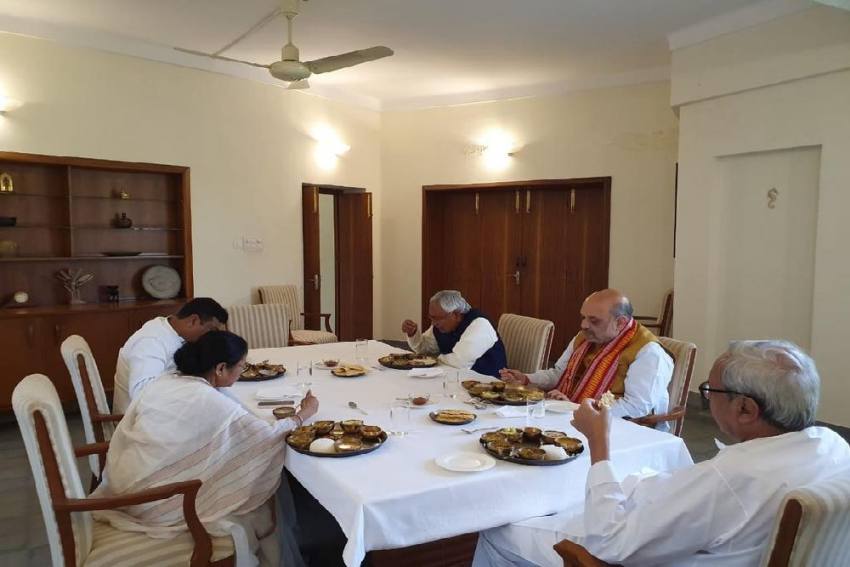 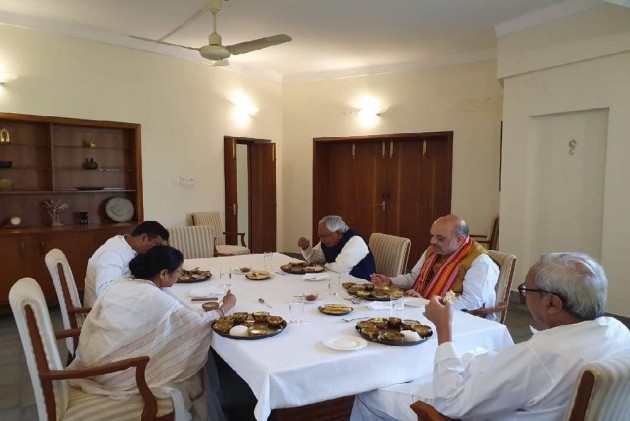 In a photo shared by Odisha Chief Minister Naveen Patnaik on Friday, Home Minister Amit Shah and West Bengal Chief Minister Mamata Banerjee are seen sitting opposite each other at Patnaik's dining table, having lunch.

Over the past year, Banerjee has been at loggerheads with the central government on various issues, latest being the contentious Citizenship Amendment Act (CAA).

The Trinamool Congress chief has maintained that the CAA is discriminatory and deeply divisive. However, the BJP government at the centre has claimed that the law only intends to provide citizenship to minorities facing religious persecution in the neighbouring countries.

The two met at the Eastern Zonal Council (EZC) meeting held in Bhubaneshwar. Batting for the entire east zone of the country at the meeting, Patnaik demanded a special economic package for the region, saying that it lags in many sectors despite being endowed with
natural and mineral resources.

Speaking at the 24th EZC meeting, chaired by Shah, the Odisha chief Minister said the entire eastern region is underdeveloped in terms of teledensity, railway network and banking density compared to other zones, and therefore needs a special fiancial package for infrastructure development.

One of the prime objectives of the Zonal Council is to develop healthy inter-state and Centre-state relations, Patnaik said, adding there is a need for financial, infrastructural and technological integration.

"If a nationwide analysis is done for teledensity, banking, rail and road density, the east zone would be at the bottom in all these subjects that are in the Union list. There is a need to double the allotments made to this region so that they catch up to the national benchmarks," the chief minister said.

Emphasising that this zone contributes maximum to the mineral wealth of the country and ensures security for manufacturing and energy sectors, he said the fruits of this wealth should boost economic growth of the region.

Lamenting that royalty on coal has not been revised since 2012, Patnaik said there is an urgent need to review this and also the share of clean energy cess with the state governments.

"Our region has some of the largest scheduled areas of the country. I reiterate my demand for inclusion of Ho, Bhumij and Mundari languages in the Eighth Schedule of Constitution," the chief minister said.

Referring to Odisha specific issues, Patnaik said he was thankful to the Union government for supporting the state during cyclone Fani last year.

Taking the frequency of natural disasters faced by Odisha into consideration, he said, Vulnerability to natural calamity should be taken as a criteria to declare his state a "special focus state".

The chief minister also spoke about delay in releasing grants to urban local bodies and non-release of subsidy for paddy procurement causing problems to farmers.

He said the state provides 50 per cent of estimated cost and free land for important railway projects but the progress has been "very slow".