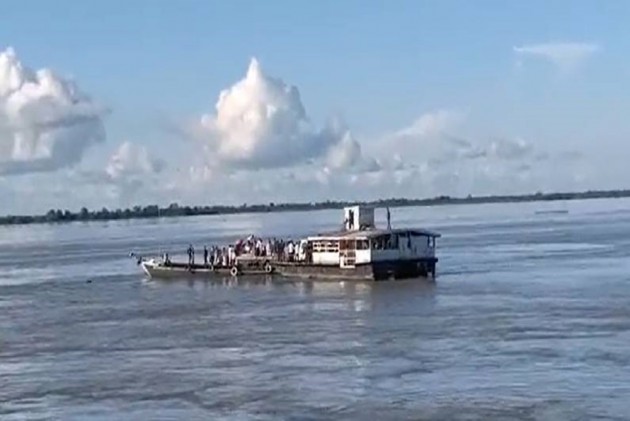 At least one person died while several others were reported missing after a passenger boat capsized following a collision with another in the Brahmaputra at Nematighat in Jorhat district of eastern Assam on Wednesday afternoon.

The deceased Parinita Das was a lecturer at a college in Majuli where she was headed. She was rescued and admitted at Jorhat Medical College Hospital where she succumbed to her injuries. Three others were also admitted at the hospital.

According to Jorhat SP,  35 persons were rescued while 27 were missing.

Teams of NDRF and SDRF were engaged in search and rescue operation.

According to Pranjal Saikia,  resident of Majuli, the ill-fated single-engine boat ' Ma Kamala' was preparing to leave for Majuli from Nematighat when the collision took place with the bigger double-engine 'Tipkai', which had just arrived from Majuli and was waiting for disembarkation of passengers.

"There are two ramps at Nematighat for outgoing and incoming ferries, but one is non-functional now. 'Ma Kamala' was waiting to leave at its scheduled time of 4 pm.  Once the 'Tipkai', which had left Kamalabari ghat in Majuli   at 1.30 pm., arrived the Ma Kamala was asked to vacate the ramp," Saikia said.

He said there was a strong current at Nematighat and the moment 'Ma Kamala' started it was pushed back towards the 'Tipkai' leading to the collision.

Majuli boat collision. The screams of terror are blood-curdling.

Many still missing after two passenger boats collided on the Brahmaputra near Majuli in #Assam pic.twitter.com/2UxIp08rSb

"As water started entering the boat, the passengers panicked and tried to get out leading to its capsize," he said.

There were about 20 two-wheelers on the boat besides passengers. The single-engine boats can carry up to around 130 passengers besides two-wheelers and cars.

Collision of boats on the Brahmaputra on September 8. @Outlookindia pic.twitter.com/aynIcsD4dv

Chief Minister Himanta Biswa Sarma has directed the Majuli and Jorhat district administrations to undertake rescue mission expeditiously with the help of NDRF and SDRF.

Anguished to learn of the ferry accident in Majuli. I have talked with Assam CM Shri @himantabiswa regarding the accident and he has informed me of ongoing rescue and relief operations.

I have directed @shipmin_india to provide all necessary support to help the victims.

He also directed minister Bimal Bora to immediately travel to the site of incident for taking stock of the situation.

The chief minister himself will visit the area on Wednesday.