The two leaders had a discussion amid dissatisfaction among a section of BJP ministers and legislators over the recent portfolio allocation. 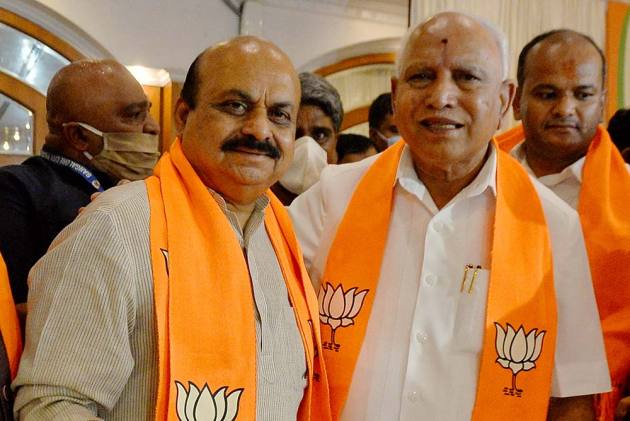 The two leaders had a discussion amid dissatisfaction among a section of BJP ministers and legislators over the recent portfolio allocation, during the recent cabinet expansion in the state.

The two leaders also discussed the prevailing political situation in the half-an-hour meeting held at Yediyurappa's residence, sources close to the CM said.

BJP MLA S A Ramadas and MLC C P Yogeeshwara were among those who are reportedly unhappy over not securing Cabinet berth.

A sulking Singh had shut down his office in Hospet in Ballari district earlier this week and called on Yediyurappa before meeting Bommai.

After the meeting, Bommai said there were no differences of opinion between him and Singh and that both were "united". He had, however, conceded that Singh wanted a "better" portfolio.

Nagaraj had also expressed his desire to have portfolios like public works department and transport.

Meanwhile, BJP MLA from Krishnaraja in Mysuru district and former Minister Ramadas and MLC Yogeeshwara called on Bommai on Saturday.

Speaking to reporters, Ramadas said he gave a letter in a sealed envelope to the Chief Minister.

"Today I handed over a letter in the sealed cover. I told him (the Chief Minister) to read when he is free. I have explained certain things in the interest of the State and the government," Ramadas said.

He added that he has explained in his letter why he did not meet the Chief Minister during his visit to Mysuru on Monday.

Addressing the media outside Bommai's residence, Yogeeshwara, who was a Minister in the Yediyurappa government, however, said, "Earlier also I had met the chief minister and now also I met him. There are no reasons behind meeting him. I have no discontentment. I am a party worker and work accordingly."

Bommai took over as the Chief Minister on July 28 two days after Yediyurappa resigned from the post. (With PTI inputs)