A notification, banning the group under the Unlawful Activities (Prevention) Act, was issued by the Ministry of Home Affairs after a high-level meeting on security, chaired by Prime Minister Narendra Modi. 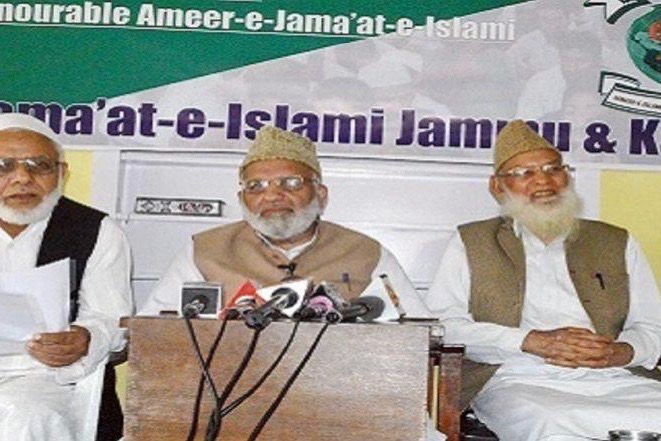 Within a few days of  arresting around 100 cadres of the group,  the Centre Thursday night banned the Jamat-e-Islami Jammu and Kashmir for five years under the anti-terror law on grounds that it was "in close touch" with militant outfits and is expected to "escalate secessionist movement" in Kashmir.

A notification, banning the group under the Unlawful Activities (Prevention) Act, was issued by the Ministry of Home Affairs after a high-level meeting on security, chaired by Prime Minister Narendra Modi.

The notification said the Centre is of the opinion that the Jamaat is "in close touch with militant outfits" and is supporting extremism and militancy in Jammu and Kahsmir and elsewhere.

It said the outfit claims "secession of a part of the Indian territory from the union" and supports  terrorist and separatist groups fighting for this purpose.

The notification said the Jamaat has been indulging in activities intended to disrupt the territorial integrity of India.

During the intervening night of February 22 and 23, the police had carried out a crackdown on Jamaat cadres and arrested 100 across the valley, including its chief Abdul Hamid Fayaz and advocate Zahid Ali (spokesperson).

The action came following the February 14 terrorist attack in Pulwama, in which 40 CRPF personnel were killed.

There have been allegations in the past that the group was a political outfit of banned terror organisation Hizbul Mujahideen but the group has denied this.

The Centre is also of the opinion that the group is "involved in anti-national and subversive activities in the country intended to cause disaffection".

While banning it under the anti-terror law, the Centre reasoned that the group was intending to escalate its subversive activities, including attempt to carve out an Islamic state out of the Union of India by destablising the government established law.

The group is also expected to escalate secessionist movement, support militancy and incite violence in the country, the notification said.

The group has been banned for five years. It has to be ratified by a tribunal constituted by the Home Ministry.

The outfit, which was formed in 1945 as a chapter of the Jamaat-e-Islami Hind and separated in 1953 due to differences over political ideology with the parent body, was banned in 1990.

The previous ban lapsed in 1995 and since then it has never been invoked again.

The party, with pro-Pakistan leaning during the Plebiscite Front days and also during the eruption of militancy, pitches itself as socio-religious organisation working mainly in the field of education and awareness about Islam.

The Jamaat-e-Islami was an influential founder member of the undivided Hurriyat Conference from its inception in 1993 till 2003, when the amalgam suffered a vertical split led by Syed Ali Shah Geelani over alleged proxy participation inthe  2002 Assembly polls by some leaders of the People's Conference led by Sajad Gani Lone.

The Jamaat withdrew from the Hurriyat and decided to focus on its social work while maintaining its separatist stand on the Kashmir issue.

The cadre-based party has a powerful Majlis-e-Shoora (advisory council) which takes decisions on important issues through consensus.

The second tier of the organisation consists of Rukn-e-Jamaat (pillar of Jamaat), who in turn elect the Majlis-e-Shoora. The number of Rukn-e-Jamaat can vary from 100 to 300 but for getting into this elite group, one has to fulfill certain criteria which can take more than a decade at least.