5 Cong MLAs Suspended After 'Manhandling' Of Governor In Himachal Assembly 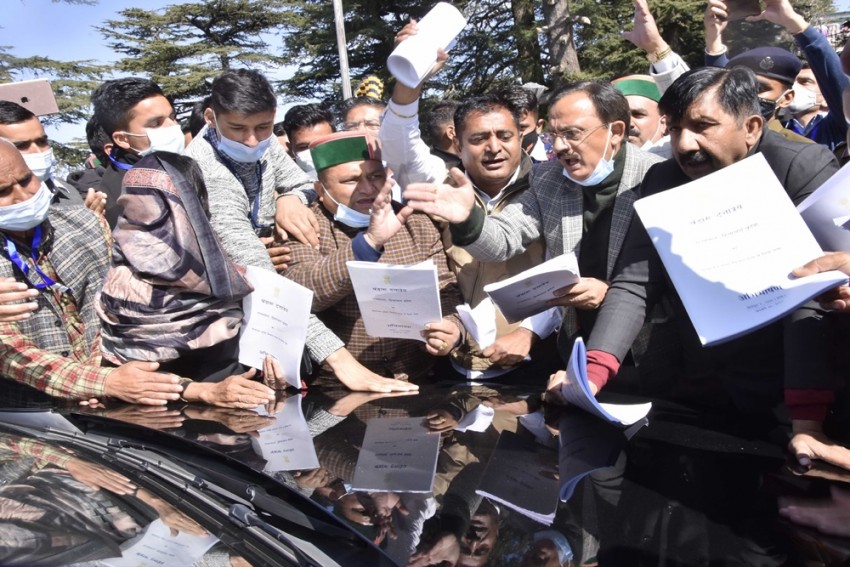 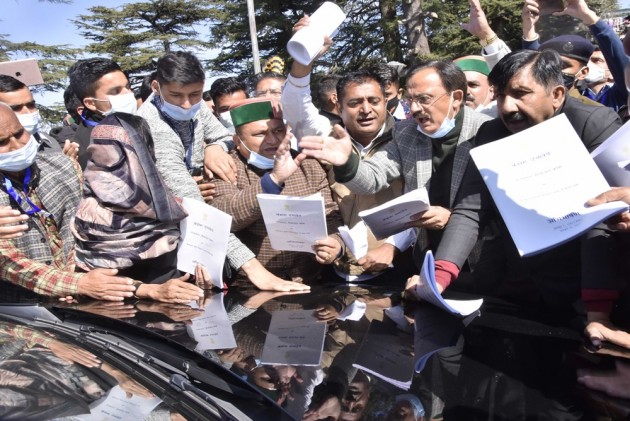 Leader of the Opposition (LoP) Mukesh Agnihotri and four other Congress MLAs were suspended on Friday from the Himachal Pradesh Assembly for the entire session by Speaker Vipin Singh Parwar following unprecedented clashes, protests, scuffles and manhandling of Governor Bandaru Dattatreya in the House complex.

A motion in this regard was moved by the minister for parliamentary affairs Suresh Bhardwaj, who termed the Opposition’s action as “physical assault” on the governor and suggested that the Speaker takes strong action. “This is also a criminal act on the part of the LoP and other MLAs. The visuals of the scuffle and manhandling have already gone viral. Our heads must hang in shame over it, he stated.

“Blocking the governor’s passage, raising slogans, creating a ruckus around him, manhandling him, pushing security personnel, his ADC, banging and pushing back his official car and throwing torn pieces of the booklet (his speech) on him deserves the strongest condemnation and warrants action against the Leader of the Opposition and others,” he proposed in the hurriedly re-convened House after the ruckus.

None of the Opposition members, however, were present in the House when the motion was adopted.

Apart from Agnihotri, the other suspended members of the House are Harshvardan Chauhan, Vinay Kumar, Satpal Raizada and Sunder Singh.

This was the opening day of the state’s Assembly’s 22-day budget session and the governor had arrived to deliver his customary address at 11 am.

The Leader of Opposition disrupted the governor’s address terming it a “bundle of lies”, having not a word mentioned about the farmers' issue, rising prices and corruption during the Covid situation. He also objected to Dattatreya picking up only some parts of the speech selectively, and not reading the whole text.

Soon other members of the party also joined him in lodging protests as the governor quickly chose to wind-up his speech and leave the House.

The minister for parliamentary affairs Suresh Bhardwaj and deputy Speaker Dr Hans Raj came to the rescue of the governor and pushed the Congress MLAs aside with help of security and police personnel.

This led to a physical scuffle and manhandling as the Congress MLAs --- Agnihotri, Harshvardha Chauhan, Satpal Raizada, Sunder Singh, Vijay Kumar and Vikramaditya Singh (MLA from Shimla rural) together resisted the ruling party members who were trying to help the Governor leave the Assembly complex.

Agnihotri even was seen banging on the bonnet of the car refusing to give up against the force applied by the deputy Speaker, Suresh Bhardwaj and Rakesh Pathania.

The Speaker and the chief minister, being witnesses to the manhandling, later held a meeting and the House was reconvened to initiate action against the Opposition.

Condemning the happenings, the chief minister said he was highly pained at the incident, which is not just an attack on the dignity of constitutional authority (governor) but unprecedented in the state's legislative history. “This is contempt of the House, a law and order issue and planned attack on the governor. I am determined to deal with it firmly and not let such things happen under my watch.”

Senior Opposition MLA Asha Kumari said, “Two cabinet ministers and deputy Speaker were responsible for the entire episode and hooliganism. The Opposition was within its right to protest inside the House on urgent public issues. The action against LoP and MLAs is illegal and we will fight back if attempts are made to gag the Opposition voice --- a BJP practice in the country.”