In 2002, a mob torched a coach of Sabarmati Express at Godhra station in Panchmahal district of Gujarat, killing 59 passengers. 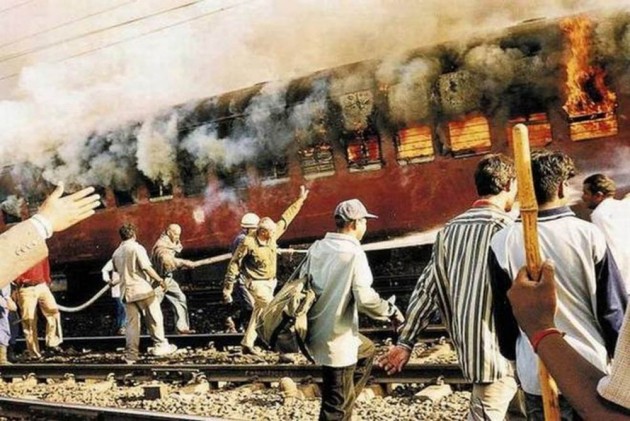 In 2002, a mob torched a coach of Sabarmati Express at Godhra station in Panchmahal district of Gujarat, killing 59 passengers.

One of the key conspirators in the case, Rafiq Hussain Bhatuk, was arrested on Monday.

Officials have claimed that Bhatuk (51) was part of the "core group" of the accused persons involved in the entire conspiracy. He has been on the run for the last 19 years, said Panchmahal Superintendent of Police Leena Patil.

Based on a specific tip-off, a team of Godhra police raided a house in Signal Falia area located near the railway station on Sunday night and picked up Bhatuk, Patil told PTI.

"Bhatuk was part of the core group of the accused who had hatched the entire conspiracy, incited mob and even arranged petrol to torch the train compartment. He fled to Delhi immediately after his name cropped up during investigation. He was facing murder and rioting charges among others," Patil said.

A total of 59 ‘karsevaks’ were killed in the Godhra train burning incident on February 27, 2002, triggering the worst communal riots in the history of Gujarat.

The SP said Bhatuk used to work as a labourer at Godhra railway station.

"He was involved in pelting stones on the compartment and pouring petrol inside before it was set on fire by other accused," she added.

An FIR on torching of the coach allegedly by a mob from Signal Falia area located near the railway station had been registered with the Godhra Railway Police, said Patil.

"After fleeing Godhra following the incident, Bhatuk spent most of his time in Delhi where he worked on railway stations and also at construction sites as a labourer. He also sold household items on a handcart," the SP said.

As part of his strategy to evade arrest, Bhatuk shifted his family from Sultan Falia, where he used to live before the Godhra incident, to Signal Falia recently, said Patil.

"We recently learnt that he had changed his house and visited his family in the past too. However, we couldn't catch him as he used to leave after a day or two. This time, our teams managed to catch him. We will hand him over to Godhra railway police for further investigation," said Patil.

She said at least three accused--Salim Ibrahim Badam aka Salim Panwala, Shaukat Charkha and Abdulmajid Yousuf Mitha--still remain at large in this case. It is believed that the trio had fled to Pakistan, she added.