They forgot the age-old maxim of cricket: You can play for a draw for 20 overs, but doing so for 90 overs is out of the question. That's the surest way to disaster. 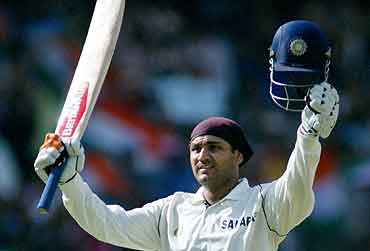 Just two sessions to go, nine wickets in hand and a bowling attack they had unfailingly milked for over 400 runs in each innings of the series. What went wrong?

India's problem was in the mind. A batsman of Sachin Tendulkar's class suddenly decided to treat each ball as if it was a matter of life and death. Whereas he could have provided direction to a batting consisting of bowlers, a rookie wicketkeeper and two fellow senior batsmen struggling for form, he cast a spell of fear in their hearts.

No wonder the Indians collapsed. They forgot the age-old maxim of cricket: You can play for draw for 20 overs, but doing so for 90 overs is out of the question. That's the surest way to disaster. The Indians must be kicking themselves in the back.

Suddenly, every Pakistan bowler looked a match-winner. Even somebody like Shahid Afridi was a demon personified. Kudos are coming the way of Mohammad Sami but what can a bowler do wrong if you don't take him on and he is secure in the knowledge he is not going for runs?

If the Indians were indeed looking for a draw, the last thing they needed was for the bowlers to find line and length and hem them with eight close-in fielders. The way to go about it was to bat normally, hit balls which deserved to be hit and scatter the fielders. Anil Kumble did it so admirably and taught his seniors a thing or two about batting.

I remember in our times we used to go hard at our opener Shoaib Mohammad for batting so defensively. We used to tell him: You are allowing the bowlers to find their rhythm and gain in confidence and they would create problem for us. At times, we used to love close-in fielders: It only meant we are going to get some free runs in the outfield!

Imran and I always used to plot ways to win matches. That's why we called for neutral umpires because we thought we were not getting credit for our skills. We backed ourselves to defend even a sum as paltry as 120 runs.

The Australians do exactly the same. They lost to India in Mumbai on a vicious turner but did they change their style of play? No. They lost but never batted under pressure.

I remember even on a minefield of a pitch, Sunil Gavaskar on-driving against the spin with aplomb. He did so because he read the ball in the bowler's hand.

Somebody like Saurav Ganguly today is choosing his movement only after a ball is pitched. Even Rahul Dravid batted against his grain in this Test.

The Indians deserve their fans' ire not in the second innings alone. I thought they were equally terrible in the first innings. But for Virender Sehwag, who else batted well? The negative mindset was all too apparent. That was the period when they should have shut the game on Pakistan. Tendulkar played an airy-fairy shot on 41 when better application was required. If you are a high-quality bat and well-set, you don't do that. Same about the others.

Not that Pakistan was without a fault. I thought they batted too long on the fourth evening. They needed to give more than six overs to the Indian openers. When they knew they were not going to be all-out, they ought to have promoted Abdul Razzaq for quick runs and give the Indians more overs to play. Again, there was this negative mindset in play.

Pakistan played out of their skins in this Test because they knew a backlash awaited them back home. I would like to see them similarly aggressive at all times.

Somehow we in the sub-continent allow pressure to get the better of us, rather than back ourselves and play the ball on merit. The 'white' countries, let's give them credit, play cricket as it should be played. Just a game and an exhibition of skills and your mental resoluteness.

More than celebrating a team's win or wallowing in the sorrow of a loss, the lesson from this series is that the teams from the sub-continent are still not able to absorb pressure. It worries me.

The gains for Pakistan were obvious: Younis Khan and Danish Kaneria. Both have taken important strides for themselves in their careers.

The profits for India were less obvious except for the impressive comeback of Lakshmipathy Balaji. India look a side which needs a bit of a shake-up: May be it's time to recall somebody like Mohammad Kaif who is in good nick and whose energy in the field gives the side a leg-up.