Set a target of 392 to win from 88 overs, the visitors raised visions of an upset victory through Sehwag and the middle order but key dismissals had them shutting shop, a bit too early, to settle for a draw. 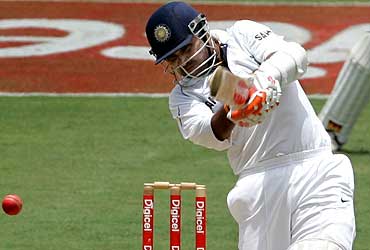 India raised visions of an upset victory before settling, a bit too early, for a draw in the third Test and leave the four-match series against the West Indies tied nil-nil on Monday.

India, set a target of 392 to win from 88 overs, brought the game alive - first through an electrifying start provided by Virender Sehwag and then by a determined pursuit by the middle order - as they took the attack to the rival camp on the fifth and final day at the Warner Park stadium.

The visitors took lunch at 109 for no loss and further needed only 148 runs from the final 25 overs with eight wickets in hand.

But the dismissal of the cavalier Sehwag and later that of Mahendra Singh Dhoni took the wind out of their sails, and they closed the game at 298 for 4 with three mandatory overs still to be bowled.

Two century stands for the first and third wickets between Wasim Jaffer (54) and Sehwag (65) and then between V.V.S. Laxman (63) and Rahul Dravid (68 not out) sparked a new life in India's bid.

India showed their intent when they promoted Dhoni (20) at number five after Laxman had fallen to a catch in the slip cordon off left-arm paceman Pedro Collins.

Dhoni hoisted the first ball he faced from Collins for a towering straight six and suddenly everyone at the ground, no less the fielding side, could sense the rumblings of an unusual end.

The next few balls, however, proved decisive in shaping India's approach for the rest of the game.

Dhoni made some ungainly attempts to cut, swish and tap the deliveries and once he failed to do so, a mid-pitch conference between him and his captain cooled the tempo.

Dhoni hit one more sizzling six to keep everyone interested but once he was out to a catch in the cover, India downed the shutters.

India deserved both praise and condemnation for the way they shaped up the chase on the final day. They were impressive in raising vision but conservative in giving up too early.

Sehwag set the cat among the pigeons with a blistering 65 from 75 balls with eight fours and raised 109 runs with his partner Jaffer from only 26 odd-overs.

The first ball after lunch though claimed him leg before and it appeared the game would meander into a draw.

But Laxman and Dravid infused new life with a century stand which gained real thrust after the tea break.

Laxman made his runs from 106 balls with 10 fours while Dravid occupied the crease for 131 balls and hit four fours and a six.

India were 200 for 2 at the tea break but then runs came in spurts on resumption with 43 runs realizing from 25-minutes of hectic play.

With an equation of six an over and wickets in hand, India looked hot favourites to claim an unlikely win. That was before conservatism got the better of them.

Earlier, West Indies resumed their second innings at the overnight score of 113 for 4 and declared at 172 for six, a combined lead of 391 runs.

Sehwag made the most of a lucky reprieve Chris Gayle dropped him on five at first slip off the bowling of Jerome Taylor.

There was another let-off for him when Ramnaresh Sarwan, one of the two short extra cover posted for him, dropped a catch off Dwayne Bravo.

Sehwag was then on 56 and the team total was 94 for no loss.

Sehwag was distinctly in unease when the West Indian quicks targeted short-pitched deliveries at his ribs and he tried to counter it by going for ungainly hooks.

His first four was a top edge over the wicketkeeper which raised his 4,000th run in Test cricket in his 48th Test. He needed three runs before the start of this innings.

Sehwag then overcame the early jitters and then settled down to play in his characteristic assured manner.

He initially concentrated on picking his singles and playing in the gaps but then opened out alarmingly for the hosts.

His straight drive off Bravo, his sixth four, raised his half century from 60 balls.

Jaffer was also solid as rock at the other end and concentrated on playing in front.

The 100 of the innings was up because of mis-fields and overthrows which gave Sehwag two extra runs in the penultimate over of the session.