In a repeat of the championship's last edition at Cologne, India lose by an identical 3-4 margin to Pakistan in a hotly contested bronze medal play-off 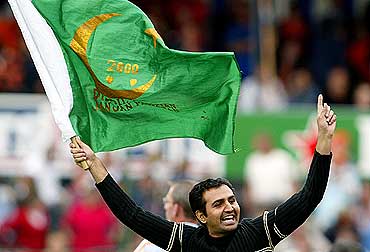 Unable to work the magic that saw them pip Pakistan in the league match, India lost 3-4 to their bitter rivals in a hotly contested Champions Trophy bronze medal play-off in Amstelveen today.

The result was a repeat of the last edition of the championship at Cologne, Germany, when India lost by the same margin to Pakistan.

But this time around, the Indians held their heads high even in defeat as they played some really good hockey. Had it not been for a couple of missed chances, it could have been an entirely different story.

India squandered the lead thrice before conceding a goal with less than two minutes to go for the final hooter to return medal-less and finish the six-nation elite event on a disappointing note.

The Pakistanis thus avenged the 4-7 defeat in the league, just as they had done in Cologne last year.

The packed Wagener Stadium was again treated to an attacking brand of hockey but the sheer thrill and drama of  the league encounter on Friday between the two teams was missing.

Even as the Pakistani players broke into celebration with a victory lap, the Indians, projected as one of the  pre-tournament favourites, could be seen retreating quietly with a dejected look, at once reminding everyone of the Cologne event.

The hyped match was a cat-and-mouse affair for much of the first half as neither team was prepared to take the slightest of risks.

India looked the more settled side and rotated the ball quite pleasingly. In fact the patience they showed was quite remarkable as they bided their time for a breakthrough.

The Indians did come up with a couple of dangerous runs on either flank, but the Pakistani defence stood up to the onslaughts quite well until they slipped by stick-checking Gagan Ajit Singh inside the circle, leading to the penalty stroke that Jugraj converted with aplomb in the 26th minute.

In contrast, the Pakistanis yet again pitched their hopes on the forwardline which was rather individualistic in its approach.

Also, with the Indian marking being spot-on, they could not get much of a leeway, barring a couple of occasions when the nippy Kashif Jawad managed to get into the circle through the back door, as it were, and make a couple of attempts which goalkeeper Devesh Chauhan parried comfortably.

However, past the 30th minute, a right-wing move from Pakistan resulted in their second penalty corner when Jugraj was penalised for deliberately playing the ball over the goal-line after he trapped a centre from Jawad. This time, Abbas found the net with a clever improvisation to put Pakistan on level terms.

In the final minute of the first half, the Indians came up with a solid turnaround as Pillay put through Deepak Thakur on the right. Thakur centered to Gagan Ajit whose reverse hit was deflected into the board by the lurking Prabhjot even as the half-time hooter went.

On restart, Pakistan showed the urgency that was missing in the first session, and drew level a second time from the very first penalty corner they forced in the second-half.

Goalkeeper Chauhan did well to block Abbas' drag flick, but Jawad was at hand to flick home the ball off the clearance.

Thereafter, the Indians maintained pressure on the Pakistan defence, that came away quite cleanly on most  occasions and the fact that they did not concede even a single penalty corner was a reflection of their performance.

At the other end, the Pakistanis were intent on forcing penalty corners, making their dependence on Sohail Abbas pretty obvious. But then, Abbas had to work hard for success as Chauhan and charger Jugraj, who took a few painful blows on his legs, repeatedly foiled him.

But in the 61st, Abbas finally breached the defence from the ninth penalty corner to make it 3-3, barely nine minutes from the close.

Then followed a period of exciting goalmouth skirmishes as Prabhjot had two good tries, the first coming off the post and then goalkeeper Ahmed Alam deflecting the attempt off the rebound. Chauhan was then called upon to make a couple of saves as an extra-time period appeared imminent.

However, Pakistan delivered the coup-de-grace minutes from the close when Rehan Butt followed up on a Waseem Ahmed pass to flick past Chauhan.

The Indians were hampered by the absence of key mid-fielders Ignace Tirkey and Baljit Singh Saini both of whom suffered injuries during the Friday match.