We should see how we could have technological excellence in warfare, said Doval. 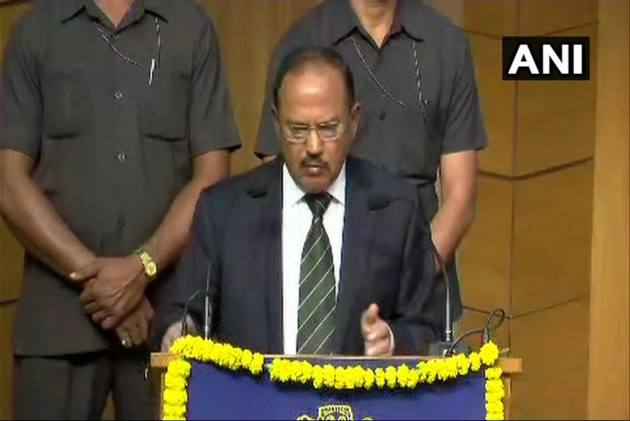 National Security Advisor (NSA) Ajit Doval on Thursday asserted that the country should prepare for the futuristic warfare or the fourth generation warfare which involves fighting invisible enemies.

Addressing the Sardar Patel Memorial Lecture, he underscored that "there could be contactless wars," he emphasised, "We should see how we could have technological excellence in warfare". Elaborating further on future threats, he explained that possession of superior weapons and large army may not make wars winnable.

"Just because superior weapons, communications, budgets and larger size of the army could make wars winnable, it would not be. The future could be of contactless wars, technology may take over that much," he underlined.

#WATCH: NSA Ajit Doval says,"India will need a strong, stable and a decisive government for the next 10 years to achieve our national, political, economic and strategic objectives. Weak coalition will be bad for India." #Delhi pic.twitter.com/PsYjvAWVBg

Highlighting the policy of Prime Minister Narendra Modi-led central government, Doval stressed: "All Defence hardware must be 100 per cent transfer of technology. This is the policy of the new government."

The NSA, focusing on the importance of technology for a flourishing economy, said, "If we have to become a major power then our economy has to be big, it has to be globally competitive, and that can only be when it is technologically ahead."

India cannot afford to be a soft power for the next few years because it will be compelled to take hard decisions: NSA Ajit Doval pic.twitter.com/Qkm5oalPGe

He also said that populist measures should not take precedence over national requirements. He underscored that governments should take decisions for the national interest even if that causes temporary pain to the people.

Speaking on Rule of Law and the importance of proper enforcement of it, Doval said, "Rule of law is very important. We should avoid any erosion in the rule of law. All temptations to undermine the rule of law should be avoided for a stronger India has to emerge."

Speaking on the fact that democracy requires people to be educated, enlightened and informed, he asserted that they should be rightly informed and educated.

"There is always a possibility of false narrative to derail the democracy, today it has spiraled manifolds because of technology and it has now become the responsibility of our citizens to erode the strength of the false narrative," he added.