'I Won't Ask Sachin To Retire'

'He's been one of my favourites and I'm more disappointed than anyone else at his failure to do well in the World Cup.' 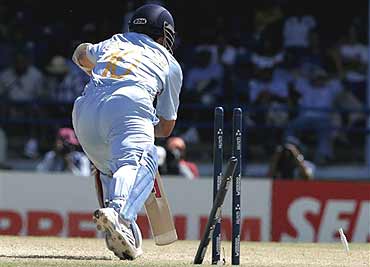 outlookindia.com
-0001-11-30T00:00:00+05:53
Legendary West Indian cricketer Sir Vivian Richards is disappointed by the failure of his favourite player Sachin Tendulkar in the World Cup but stopped short of asking him to hang his boots.

"It's not up to me to ask him to retire. He's been one of my favourites and I'm more disappointed than anyone else at his failure to do well in this World Cup," said Sir Viv who, by Tendulkar's own admission, has been his childhood hero.

Tendulkar, arguably the greatest player-ever in one-day cricket, scored 7, 54 and 0 from his three innings in the World Cup, where the Indian team lost to Bangladesh and Sri Lanka to be thrown out of the competition in the preliminary stage itself.

In the wake of India's disastrous show, the voice has grown shriller back home with Tendulkar's effigies being burnt; his photos being garlanded with footwear and calls being made for him to retire.

But Sir Viv said instead of blaming any individual, it's the entire squad which must take the blame for the debacle.

He also believed it was wrong to blame coach Greg Chappell for India's dismal show.

"Too many times coaches are blamed for a side's poor performance. I don't think that's right. Players too must take the responsibility. A coach can do only so much. It's the players who have to go out in the middle and perform," he said.

Sir Viv, arguably the greatest batsman since World War II, said India and other teams in world cricket needed to learn about mental aggression and toughness from the Aussies.

"You watch (Australian captain) Ricky Ponting from the first ball and he is there. He is making an announcement that he wants to take you on. The way Matthew Hayden played today (against the West Indies), these guys are mentally very, very tough.

"Other teams need to learn from their example. It's very difficult in international cricket to remain mentally tough all the time. It's a very hard sport."

Sir Viv drew from the instance of his own playing days and how he wanted to dominate the opposition in the park.

"I walked on to the park and it might have given the impression that I owned the park. There could have been a fast bowler who must have thought the same. The way I looked at it, my attitude might force the fast bowler to rethink his position a bit," he said.

He also showed concern on Pakistan coach Bob Woolmer's tragic death and hoped his murder mystery would soon be solved.

"We the West Indians are concerned that as hosts this matter is quickly solved. I hope it brings out in open all those things about the game which are not helping its image."