'I Think There Is Some Hope'

As I have said in dealing with Pakistan our attitude has to be – trust – trust but verify. So only time will tell which way the animal will turn. 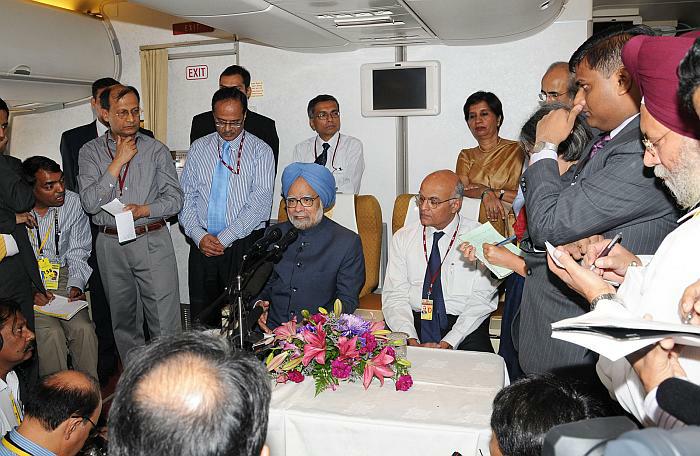 PM’s onboard media interaction during return from G20 Summit at Toronto, Canada

Question: What were your expectations from G-20 Summit, especially when it is seen as a rich countries’ forum against the less richer ones ? Are you satisfied with the bilateral talks?

Manmohan Singh: Well this meeting of the Group of was in some way the preparation for the summit meeting in Seoul this November. I think the Summit has helped in charting out the agenda and action points for the summit which will be firmed up in Seoul. As far as our immediate concern with regard to the situation in the Eurozone, the situation of the banking system in Europe and there was agreement that the recovery that has taken place in the last year is rather fragile. What is needed is a calibrated attempt at fiscal consolidation rather than a one size fits all sort of action. In that way there is progress, even those countries which want to go ahead with fiscal consolidation, I think the caveat is that this must be done in a growth-friendly manner and my impression is that even those European countries who came out with targets at fiscal consolidation they have been going about their business with due caution. In that way the Summit has played a useful role in clarifying what is the scope for fiscal consolidation and what manner the process of consolidation should be found. As far as India is concerned, our banking system remains well managed, our economy is growing at a rate of 8.5% per annum, our fiscal situation is a cause for concern but when we compare the fiscal deficit or the GDP debt ratio of the major developed countries, I think we come out much better.

Question: In your meeting with Sikh members of parliament of Canada, did they raise the terming of 1984 riots as genocide?

Manmohan Singh: Well I met parliamentarians belonging to the Indian Diaspora. I complimented them, I praised them with regard to the achievements of the members of the Indian origin communities and the niche which they have carved out for themselves in Canadian public life, in Canadian economy, in services. So it was an attempt on my part to tell them that we in India take great pride in their achievements and that the community should remain united. It should not allow the divisive politics of our subcontinent to derail the cohesiveness that is necessary to ensure that the Indian communities continue to get their due share in the Canadian set up.

Question: Does the fuel price decontrol indicate you are ready for tougher reforms? Are we going to see further deregulations?

Manmohan Singh: Well I can’t tell you what we are going to do next. I think that when things get crystallized in the Government system you will know them. With regard to petroleum prices, the fact that petrol prices have been set free, the same is going to be done to the diesel prices, was much needed reforms. And the adjustment that has been made in the prices of Kerosene and LPG were also necessary, considering the very high amount of subsidy that is implicit in the pricing structure of Kerosene and LPG. We have taken due care to ensure that the poorer sections are affected to the least possible extent and that is why the attempt to keep under regulation the prices of kerosene and LPG.

Question: Has the decision to hike fuel prices been taken under some pressure?

Manmohan Singh: There is no pressure on Government of India from any quarter. What we need is to do the right things by our country. The subsidies for the petroleum products have reached a level which is not connected to sound financial management of our economy. So it is taking that into account that this decision has been taken to put some burden on the common people, but I think it is manageable.

Question: In the G20 Communique issued this time around, has there been a situation wherein any country has been forced to go against its own national economic policy?

Manmohan Singh: We are dealing with the affairs of sovereign nations. There is, I think a growing concern that the increasingly inter-dependent world in which we live in, there is need for macro policy coordination to a much greater degree than that has been feasible in the past. People have talked about macro economic co-ordination that the consolidation of the financial system, the fiscal consolidation must be undertaken in a manner that is growth friendly. The IMF has put forth some categories of the countries where approaches may be similar in tackling the problems macroeconomic co-ordination. But it is too early to assess the process. The IMF will come with its financial assessment of the financial imperatives of each of the 20 countries- and that would really be the time, I think people would be able to judge how far countries are willing to subordinate their sovereignty to the needs of managing an increasingly inter dependant world.

Question: You have been working hard on making peace with Pakistan. You discussed with President Obama as well. In case of another 26/11 attack happening from Pakistan against India, how do you propose to go?

Manmohan Singh: The Home Minister has been in Pakistan earlier last week. You must have read what he has stated. I think there is some hope. As I have said in dealing with Pakistan our attitude has to be – trust – trust but verify. So only time will tell which way the animal will turn.

Question: What is your view on the Tobin tax?

Manmohan Singh: There is now a lot of discussion on corporate governance .I think good corporate houses are looking at what they can do in the non traditional key in providing social services, education, health facilities for their employees. I think that it’s a corporate responsibility which has to be shouldered by the corporate sector on its own, we are not contemplating any legislation in that area.

Well the Tobin tax has merit in particular situations but as far as India is concerned we have not reached a stage where capital flows have become a problem. I think if capital inflows into our country both by way of direct investment and by way of portfolio investment have been at reasonable levels, we don’t face situations of the kind which would require an imposition of Dobin Tax.

Question: What are your views on the proposed expansion of BRIC. My second question pertains to what is the relevance of G8 when G20 is the leading forum?

Manmohan Singh: As far as BRIC is concerned we are members of the group. We would like the BRIC countries to consult with each other on all the issues which have bearing on the global economic management and as far as expansion of its membership is concerned that’s a matter that is to be discussed by the members themselves. It is not proper for me to make any public comment.

As far as G8 is concerned, I think it is for G8 countries to decide. But as far as G20 is concerned it has been agreed that this will be the premier forum for discussion of the international economic issues and I talked to Canadian Prime Minister who said that here after the G8 will probably deal with security issues much more vigorously than it has been doing thus far in the past.

Question: What are the plans for President Obama’s visit to India?

Question: Opposition to fuel price hike is mounting in India and even your alliance partners are concerned. Your take on this issue?

Manmohan Singh: Well I read about the intentions of the opposition in the Press. I have not talked to anyone myself , nor I have been briefed by our political establishment What I am considering is that what we have done by way of adjusting the petroleum prices is that people of India would appreciate the compulsions, which have compelled us to undertake this measure. And our people are wise enough to understand that excessive populism should not be allowed to derail the progress our country is making, and for which it is winning kudos internationally as well.

Question: In your talks with President Obama, did you take up the issue of supply of Chinese reactors to Pakistan? Would there be a cabinet expansion during the monsoon session?

Manmohan Singh: About your first question on my discussions with President Obama, it was essentially a discussion to explore the agenda of President Obama’s visit to India later this year in the month of November. So I did not have the time to dwell on the issues that you have raised.

And as far as the monsoon session and cabinet reshuffle is concerned, I think that Press Conferences are not the appropriate places to announce Cabinet changes. When they are made, you will hear about it.

Question: Industrial disasters impacting on climate have also plagued US. Given the aftermath of the Bhopal tragedy, did you take up the issue of extradition of Warren Anderson with the US side?

Manmohan Singh: Well, we are where we stand. We will try to ensure that US Government takes a more favourable attitude towards extradition. But we have not approached them yet. I did not raise this issue in my discussions with President Obama. We will cross the bridge when we come to it.

Question: On the Bhopal Gas tragedy issue, isn’t there a collective failure on all parts, the government, political establishment and the judiciary?

Manmohan Singh: What we propose to do has been made clear by the GOM, whose report has been endorsed by the Cabinet. It is a fact, it is true that our judicial processes are time consuming , that it should have taken 25 years before the case could be decided is something that we have to reflect about and the inadequacies of our judicial system.

Question: Don’t you think that the Congress establishment should come clean on who was responsible for letting Anderson go? What is the reality of the issue?

Manmohan Singh: What is the reality, we are not hiding anything. I think the GOM has looked at records. There is nothing that they have come across by way of the definite findings as to who took the decision. Those records are not available now.