National 'I Intend To Keep Talking'

There is no gag order, insists Digvijay Singh while reiterating that "Mamata was immature." With his vanvaas coming to an end, he says he will be "happy to contest the next Lok Sabha elections" 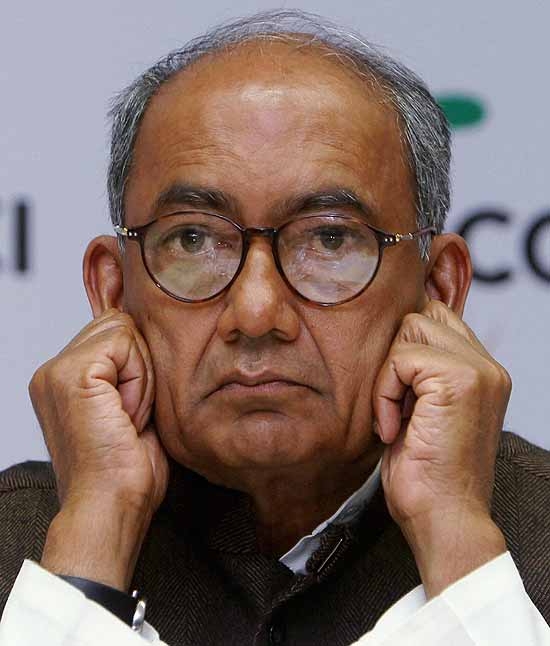 Congress General Secretary Digvijay Singh is one of the long distance runners in the party. Currently, his fortunes are down because of the UP defeat, and most recently remarks about Mamata Banerjee, that resulted in the Congress issuing a statement that he is not authorised to speak for the party. Saba Naqvi asked him if he is down and out. Excerpts:

Is there a gag order on you?

Not at all. I intend to keep talking. I am talking to you. I am not the Congress spokesperson and have never been the person giving the official party line.

Were you checked by party president Sonia Gandhi?

I never discuss any issue which I have discussed with the party president.

It is generally believed that the leadership is upset because of your harsh remarks about Mamata Banerjee in a TV interview.

I was trying to convey my own feelings and perceptions about Mamata whom I regard as a great fighter who has suffered a lot during the rule of the Left. But the way she behaved in opposing Pranab Mukherjee as president and proposing the name of Kalam was immature. I was conveying that. Beyond that, I am not the Congress spokesperson.

Since the UP election and Rahul Gandhi's failure, your position in the party has been questioned as you were seen to be mentoring Rahul.

That is not true. Rahul Gandhi has his own mind so there is no question of mentoring. And why say there was a setback in UP? We were disappointed at the results but there are only two parties whose vote-share has increased and they are the Congress and the SP.

The next big contest will be in Gujarat against Nearendra Modi. Will Rahul Gandhi make himself the face of the campaign as he did in UP?

UP is his home state so there was a big effort. Rahul will campaign in Gujarat but not on the scale he did in UP. I don't expect him to make it a personal contest between himself and Modi.

It is being whispered that you will be sent back to Madhya Pradesh politics..

I don't intend to go back to state politics. There is no question of me contesting the assembly polls. I will not be contesting from Raghopur which was my Vidhan Sabha seat in MP. However, if asked by the leadership I will be happy to contest the Lok Sabha seat of Rajgarh under which Raghopur falls. But that is only if the party president wants me to contest in 2014.

You had taken a 10 year vanvaas [self-imposed exile] from holding office in 2003 when you lost after two terms as CM in MP. Net year that period will be over. Now you are ready to contest the next election. Does that mean you want public office now?

Not at all. I am very happy to continue in organisational work and am not seeking public office and have no desire to join the government. Because I am ready to contest the Lok Sabha polls does not mean I want to stop organisational work.

About Madhya Pradesh where elections are due next year, the Congress has many factions. Jyotiraditya Scindia is believed to be strongly opposed to you. There is a suggestion that he should be projected as the CM candidate next year. Do you have an opinion on this?

Scindia is a very bright person.

It is said you need an image make-over because you overplayed the Muslim card..

I have always fought religious fundamentalism of both Hindua and Muslims. There is no card I played.

The Congress is also annoyed over strong words against Modi whom the leadeship does not want to take on frontally.

I will repeat and stand by what I said. That even Ravana built an golden Lanka. But arrogance can be the downfall of anyone.